Rescue of an entangled White-backed Vulture in Kruger National Park

Our Project Officer, Andre Botha, who is based in South Africa, found a White-backed Vulture dangerously entangled in a dead tree. Here is his account of what happened:

“On Tuesday morning while busy with fieldwork in the Kruger National Park, I was contacted by the State Veterinarians and Veterinary Wildlife Section of SANParks about a vulture that was found hanging in a tree near Skukuza in the Kruger National Park. I drove out to the site expecting to find a dead vulture suspended from a tree that needed to be recovered and perhaps assessed for the reason of its death. When I arrived at the scene, staff from SANParks were already there, but warned me to first stay in my vehicle as there were two male lion at a giraffe carcass not more than 70m from the tree which the vulture was suspended from. Once it was determined to be safe, I was able to assess the situation and was surprised to find that the adult vulture was still alive, but hanging upside down suspended by one leg to which a rope was tied. It was this rope that had become entangled with the branch it was sitting on and which now posed a serious threat to the bird if we were not able to remove it safely from the tree.

“Fortunately, the bird seemed to still be in good condition, but the operation to recover it from the tree was a daunting task as the dead Tamboti Spirostachys Africana  that it was entangled in was rather fragile and simply climbing the tree to reach the bird was not possible. The location of the bird was such that trying to break the branch it was hanging from was also risky as the bird may have been injured should it be dislodged from its precarious position if it had fallen into the branches below. With the arrival of the State Veterinarian, Dr Louis van Schalkwyk and other colleagues from his office, we discussed options to try and get the bird safely out of the tree. I remembered that one of our ladders previously used to access Southern Ground Hornbill nests in Kruger was in use at the Skukuza airport and we requested that this be brought to the scene to see if we could climb up to the bird to possibly remove it. Airport staff kindly brought the ladder to us, but when they arrived, only one half of the ladder was loaded on their vehicle and it would not have been sufficient to get us high enough as the bird was suspended about 20m above the ground. Louis then had an idea to go to the construction site of the new hotel at Skukuza to see if they perhaps had a crane that we could use to lift a person, probably me (!), up to the bird to attempt to free it. Minutes after he left to investigate this possibility, and while we were standing below the tree in growing anxiety about the welfare of the bird in the rising temperature, a stiff breeze started to stir the leaves and branches of the trees and this movement of air seemed to invigorate the bird who started flapping its wings to again attempt to escape from its precarious position.

“This effort was rewarded with the branch snapping and the bird then drifting down to the ground with rather weak wing-beats, but away from the dead branches which could have possibly caused injury. We were on hand seconds after it landed safely on the ground and were able to catch it to assess its condition and for possible treatment. Upon closer investigation, we found that the rope attached to its leg was expertly tied onto the bird, probably by someone who had trapped the bird and kept it in captivity tethered by the rope to the ground. Baling string that was also found tied to the other leg of the bird. It is not clear how long the bird may have been kept captive, but it escaped and eventually made its way to the giraffe carcass in the Kruger Park where it became entangled in the tree. Although not common, live vultures are known to be trapped and kept illegally by some people as they believe that being in possession of such a bird brings good luck, a rather different interpretation of the more widely known belief-use practice of using vulture parts for purposes of clairvoyance and improved chances of success at betting, etc.

“The bird was taken to the State Veterinary facilities in Skukuza where we were able to assess its condition and we were able to determine that it was tired, but in fairly good condition despite its ordeal. We administered fluids to re-hydrate the bird and decided to keep it overnight under observation. It was placed in a holding cage and offered a juicy piece of impala liver to see if it would eat.

“When we opened the cage yesterday morning, we found that the liver was consumed and that the bird was quite sprightly and ready for release. As a token of gratitude, it also took a small chunk out of my arm when I captured it and later emptied its bowels on At Dekker, State Veterinary technician at Skukuza who was holding the bird at the time! We decided that the best site for the release of the bird was the Skukuza golf course and drove there with the bird. This also provided an opportunity to do a brief bit of education to a group of about 40 children from the Skukuza Nursery School before the bird was released on one of the fairways. After an initial hesitant effort to fly away and running about 70 metres from the point of release, the bird spent about 2 minutes on the ground with wings spread open. It then began beating its wings more purposefully and took to the skies after a short run. The children all spontaneously broke into applause when the bird took off and it disappeared from view a short while later.

“A good outcome and an excellent example of how teamwork and a rapid response, once the bird was found, helped to save a critically endangered bird from an unpleasant and unfortunate end!” 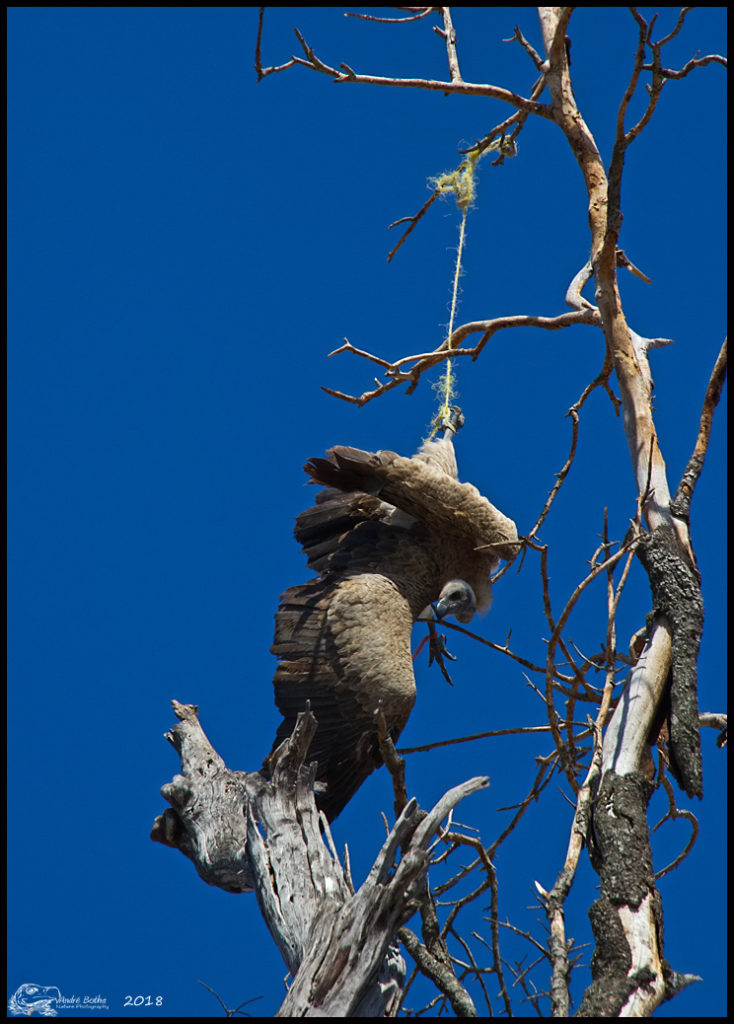 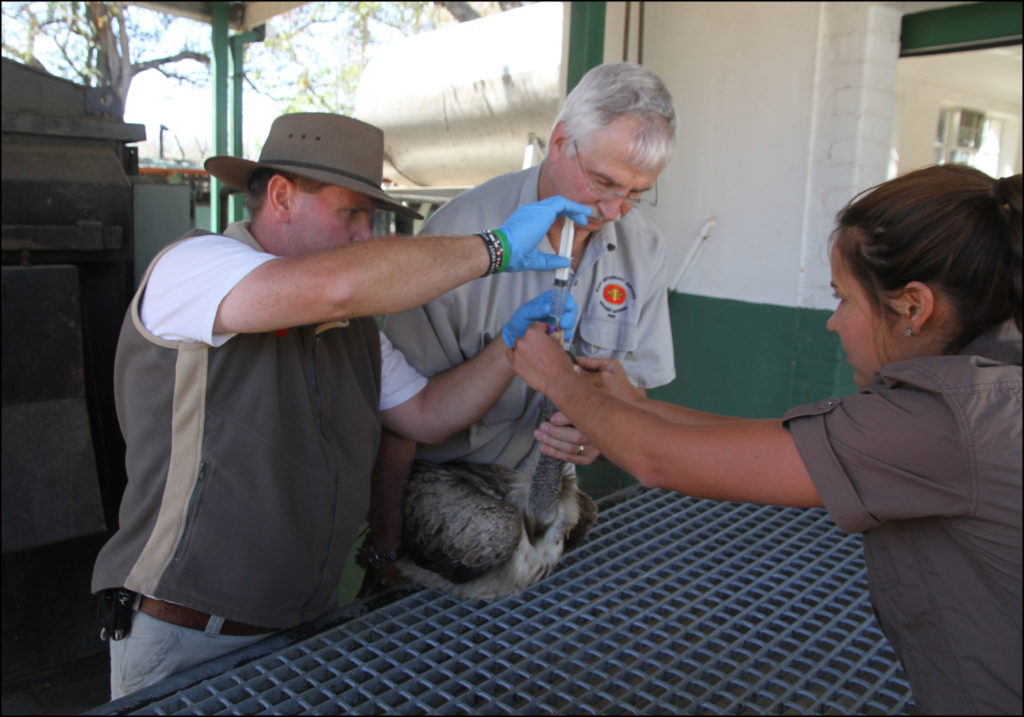 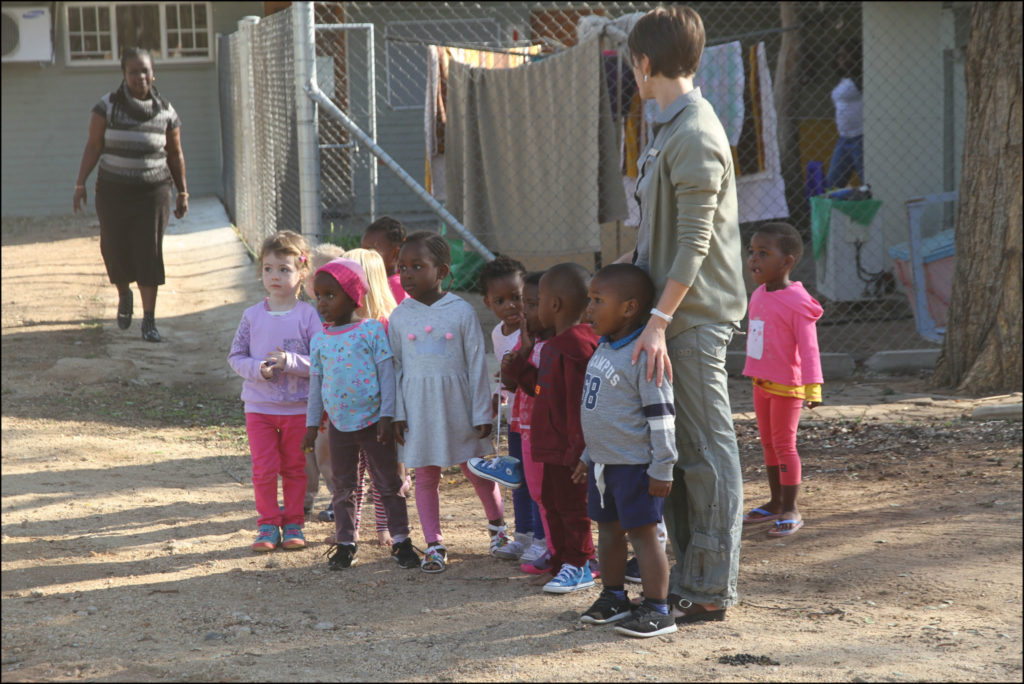