A Year in Vulture Conservation 2019

January – A team of trained field staff were able to respond to a poisoning incident in Kenya on a hyena carcass, where 20 vultures were killed. Fortunately, they prevented the deaths of many more vultures, and we able to rehabilitate and release four vultures found still alive.

February – Published two papers in scientific journals. Dr Campbell Murn, our Head of Conservation and Research published a note in the Journal of Raptor Research on talon-grappling in Hooded Vultures, a rarely recorded occurrence. Researcher Thomas Johnson along with Dr Campbell Murn published a paper on the interactions between Pied Crows and breeding White-backed Vultures in the journal Ethology, Ecology and Evolution.

March – A White-headed Vulture chick hatched at the Trust, to parents Angus and Satara, their fifth chick!

April –  A second White-headed Vulture chick hatched at the Trust, to our second breeding pair.

An Asian White-backed Vulture hatched at our Changa Manga Forest Reserve breeding centre in Pakistan. This chick went on to fledge successfully and join the captive colony.

We were honoured to be recognised for our significant contribution to Saving Asia’s Vultures from Extinction (SAVE) by being appointed a SAVE Core Partner for our work with Critically Endangered vultures in Pakistan.

June – SAVE announced a partial recovery of Asian White-backed Vulture and Slender-billed Vulture populations in Nepal, proof that Vulture Safe Zones are an effective conservation tool in the fight to save Asia’s vultures.

Our pair of breeding White-backed Vultures successfully hatch a chick, after a few years of unsuccessful breeding, the chick has now fledged and is named Simba!

July – The Cambodian government made a landmark decision to ban diclofenac; this drug is toxic to vultures and the primary cause of the 99% decline in Asia’s vultures during the 1990s so this is a very welcome development for SAVE.

In response to a poisoning in Kruger National Park that killed 119 vultures, we delivered 23 Poison Response Kits to Sanparks Rangers working on the ground.

Our Head of Development Andy Hinton, and Bird Team member Ben Cox, went on our annual conservation field trip to South Africa. Across the three sites in Dronfield, Mokala and the Kalahari Andy, Ben and the rest of the team ringed and processed an impressive 174 birds, which, as well as the 169 White-backed Vultures, also included a Verreaux’s Eagle-owl, three Greater Kestrels and a Lappet-faced Vulture!

November – Campbell attends the SAVE conference in Pinjore, India where SAVE partners updated on the developments in Asian vulture conservation 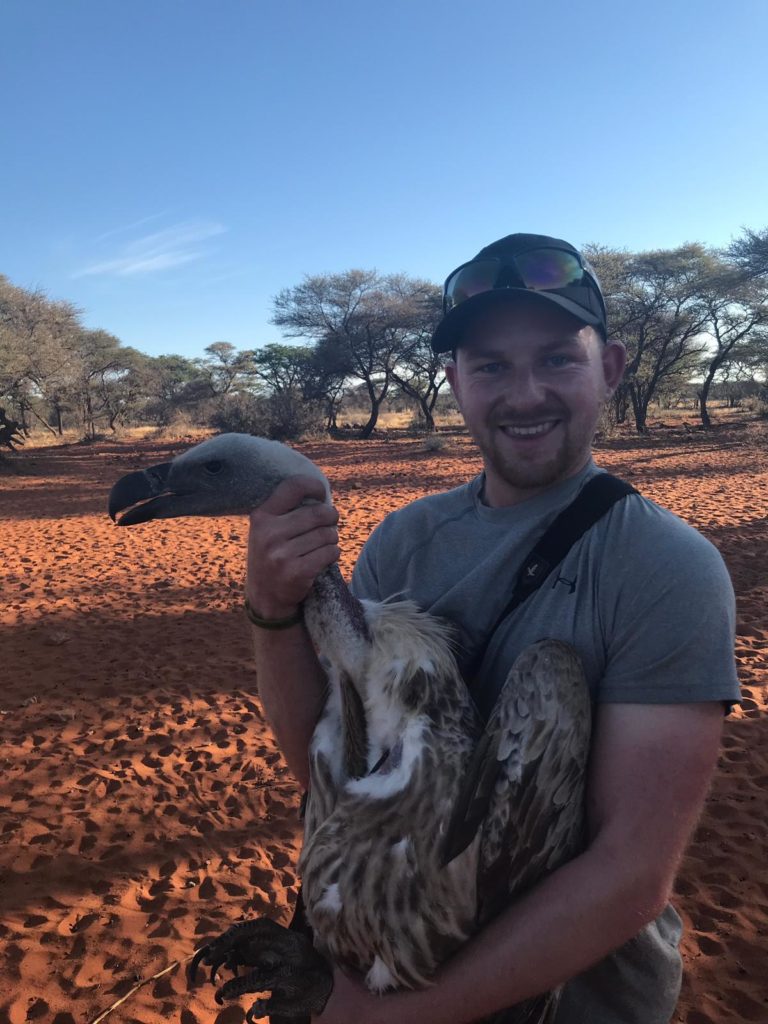