We are extremely proud of the work we do in our National Bird of Prey Hospital™; we continue to deliver an excellent record in Bird of Prey rehabilitation. Our Hospital Manager Cedric Robert along with our vet John Chitty, members of the Bird Team, and dedicated volunteers work tirelessly to ensure the wild birds admitted to the Hospital receive the best care possible. 2019 was no exception; with approximately 60% of cases concluding in a successful rehabilitation and release back into the wild! Here are our highlights from the year:

January – On 3 January we released the first rehabilitated bird of 2019 from the hospital – an adult female Barn Owl admitted in late 2018 after being hit by a vehicle, who happily made a speedy recovery!

February – This month saw the admission of a Barn Owl found confused and concussed on the side of a main road. Fortunately, some expert care and recovery time allowed this owl a full recovery and it was released a few weeks later. Sadly, a large proportion of our admissions are birds of prey who have suffered from collisions with vehicles.

March – We released and tracked a rehabilitated Buzzard from the hospital as part of our research into Buzzard movements and behaviour following rehabilitation.

April – A male Peregrine Falcon was admitted with a broken wing and feather damage. This case was a challenging one as the bird was otherwise in excellent condition, and suspected to have suffered a trauma of some kind. Fortunately, it responded extremely well to treatment, and was given plenty of time in an outdoor aviary to regain fitness. We were thrilled to be able to release it back into the wild after a 63-day recovery in our hospital!

May – This is typically our busiest month and admissions always start to pick up in May, particularly of juvenile Tawny Owls who are often brought into the hospital when they have fallen from their nest. In May we admitted 8 juvenile Tawny Owls. We are always grateful to caring members of the public for looking out for our birds of prey, however it is perfectly normal for juvenile Tawny Owls to move onto nearby branches when still very young and their parents will still feed them! If you see a young owl that doesn’t appear injured, sick or in immediate danger, it is safe to return it to its nest or a branch nearby. Of course, if you think it is in trouble, then call us for advice!

June – Our Hospital Manager, Cedric Robert, runs the Hampshire Hoppit Marathon and raised £5373 for our National Bird of Prey Hospital™, enough to cover all the running costs for a whole month!

July – Three Red Kites were admitted and cared for in our hospital; this is almost half the Red Kite admissions for the whole year! One was hit by a car, one had unfortunately collided with a window and the third was a juvenile that was found exhausted. Our hard-working hospital staff were rewarded with successful rehabilitation and release back into the wild for all three!

August – We were thrilled to receive a significant donation of funds from Animal Friends for refurbishments to our National Bird of Prey Hospital™! Work will begin in 2020!

September – The 50th bird release of 2019! An adult female Buzzard that was found south of Basingstoke and brought in from another wildlife rescue centre. The Buzzard stayed with us for just over a month to recover and regain fitness, and was released back into the wild where she was first found.

October – We successfully rehabilitated and released a Goshawk back into the wild. This was particularly exciting for us as it is a species we rarely encounter in our hospital.

November – A rewardingly swift and successful rehabilitation of a Kestrel with a suspected tick reaction in its eye!

December – We cared for an adult Buzzard with serious concussion and in such a sorry state that we feared it was too late to save it. Our Hospital Manager Cedric reported that he thought the bird would die as he examined it. He made the bird comfortable and placed it in a quiet bay overnight to see if there was any hope of recovery. Cedric checked the Buzzard the following morning expecting the worst and reports that the spritely bird was “bright like the sun”! A miraculous recovery! This lucky bird was released fully recovered a few days later.

A Tawny Owl came to us after falling down a chimney! The bird was fit and healthy, and after a bath from Cedric it was released back into the wild, the photo below shows Cedric with the sooty owl! 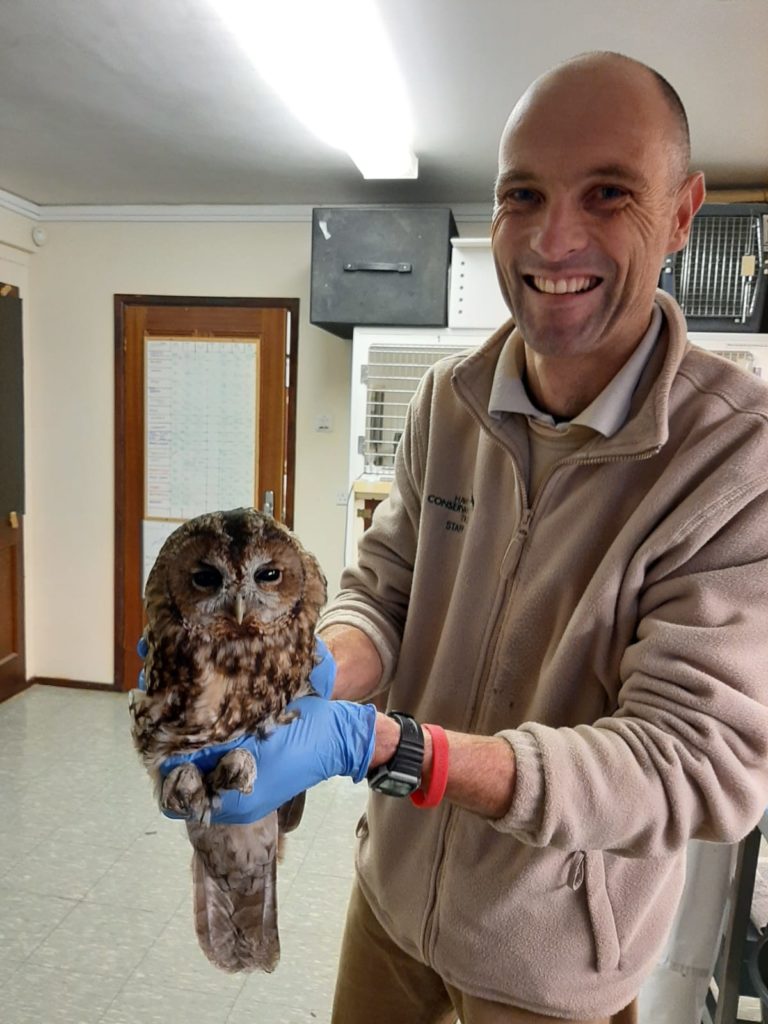 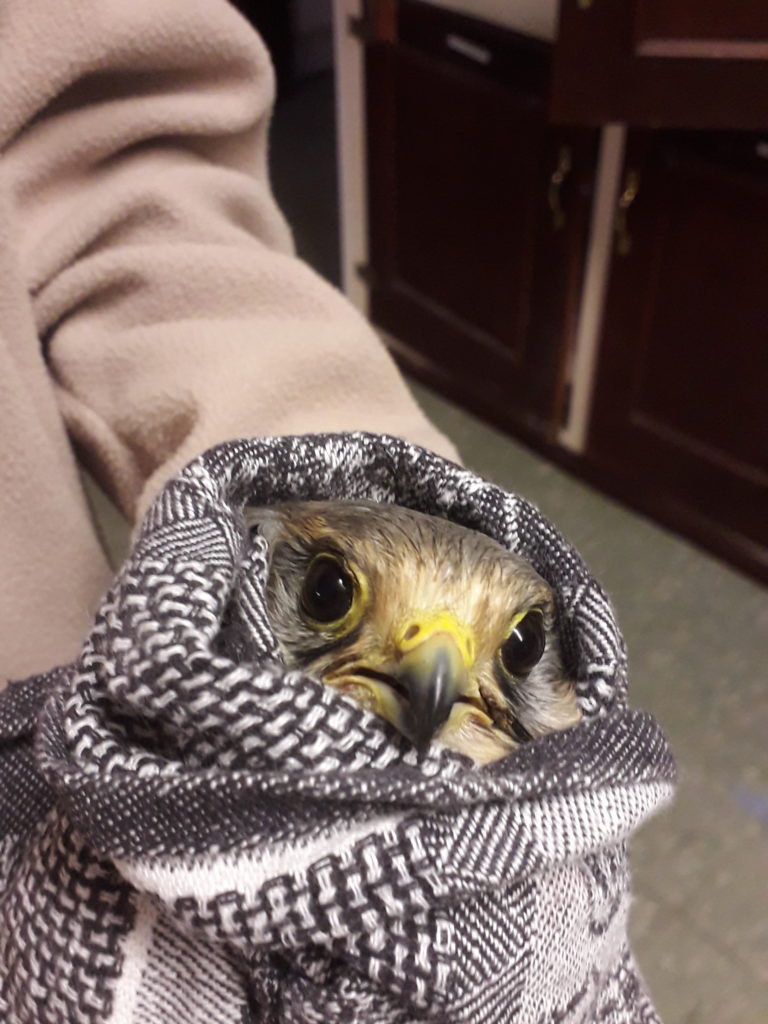