Anyone who has visited us will know that we really love vultures, and many of our regular visitors will know that Kat Ralph from our Bird Team has a particular favourite in Burdock, one of our resident Turkey Vultures. During the summer months, you can often see Kat flying him as a pre-show act to our 2pm display in Reg’s Wildflower Meadow. We’ve caught up with Kat to find out more about the delightful Burdock:

“I have been working closely with Burdock for 2 years now and he’s proven to be a real character and also a firm favourite of mine.

When I first flew Burdock he was renowned for being a bit naughty and lazy! He would do as little flying as he could get away with and as much time sitting and sunbathing as possible. He would often choose to ignore my hand signals that were supposed to encouraged him to keep flying and come and land on the glove regardless in a hope to get a tasty treat! The sunbathing is fabulous to see, but he would often choose to do it out of view of the visitors so they just had me to look at, standing out in the meadow, with no bird. 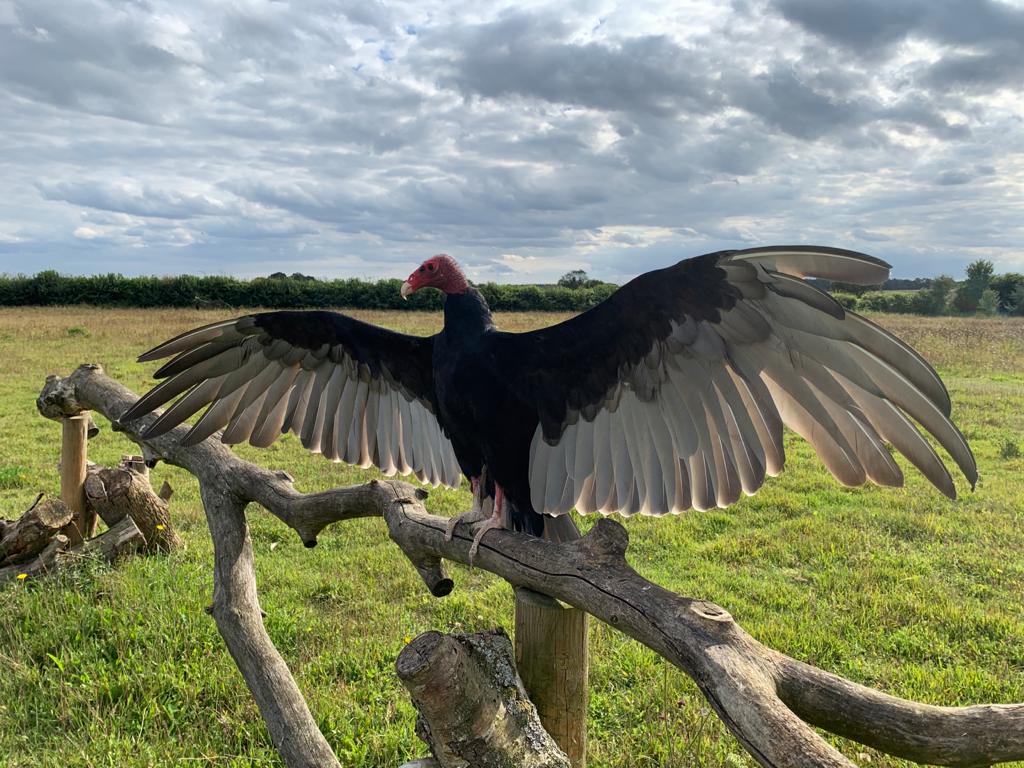 We always work on positive reinforcement with our birds, rewarding them for carrying out a desired behaviour – such as flying beautifully and showing off what they can do best. Burdock, however, was not showing off. I needed to go back a few steps with an established flying bird in order to make sure he was doing himself justice. That meant not rewarding Burdock when he ignored my hand signals and landed with me regardless and only rewarding him for flying and coming to the glove when called. Animal training is something I have always had a passion for – I love the rewarding behaviours which can be achieved and also watching the animal benefit from different training techniques. Bonds and relationships are also formed through cooperative training.

Last year I made quite a bit of progress with Burdock in terms of training, using hand signals and vocal encouragement and found he was starting to push off a bit more and make the most of the space that the meadow has to offer. He then had a rest over the winter period in order to give him time to moult his feathers. Whilst he was having a rest I provided Burdock with plenty of other activities to keep him busy – most of which included concealing his food as he has such a good sense of smell, enabling him to locate his meal just by smelling.

I started flying Burdock again in the spring and this flying season has been his best by far. He is flying like a pro and is really starting to show off just how amazing he is in the air, floating on the breeze and using the wind to his advantage. I never tire of watching him and it is one of the highlights of the job for me. To add to the joys of flying him, I have been able to fly Burdock to a piece of music that I have wanted to fly him to since last year because he now stays on the wing for minutes rather than seconds – I always think that when music accompanies a bird in the right way, it creates a more memorable experience for visitors, captivating them and creating more emotion. I have wanted to fly Burdock to music as I feel he has an important role to play in converting visitors into vulture lovers – something we do everyday through our displays. Although as a species the Turkey Vulture is classed as Least Concern, he can still help visitors to understand and appreciate vultures a bit more.

International Vulture Awareness Day at the start of September was a highlight for me as I was able to fly Burdock whilst visitors were standing in Reg’s Wildflower Meadow – something which he had never encountered. The birds generally like routine and adjust slowly to change but Burdock takes everything in his stride and even flew between people. With the music and him floating around, it made for a fantastic end to an incredible vulture themed day.

Burdock still enjoys a sunbathe, spreading his wings out and soaking up the rays where he can be admired by visitors and, more importantly, he seems to really enjoy flying over the meadow and receiving tasty rewards for doing it.” 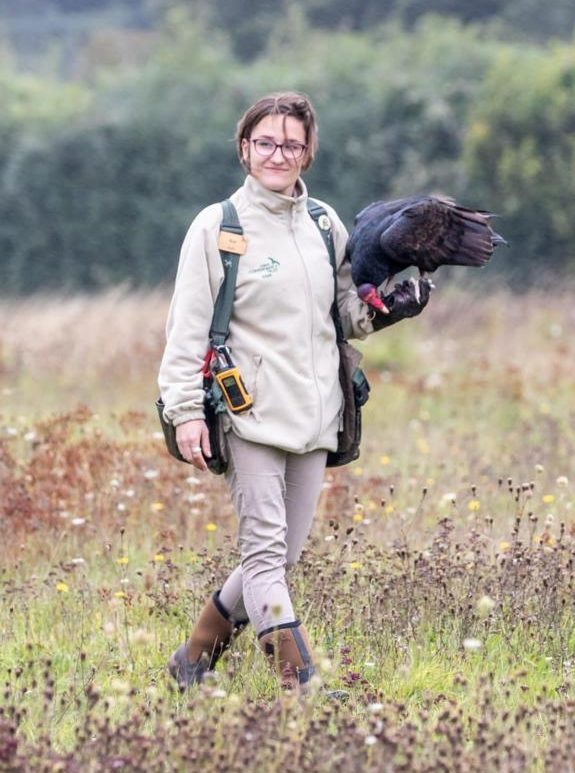