We are delighted to announce our Marion Paviour Award winner this year is Dr Georgia Jones, from Bournemouth University, and her project on Kestrel diet analysis here in the UK! The Trust is extremely pleased be part of this fascinating project working with Kestrels, especially as we work so closely with this Amber-listed species. We are extremely grateful for the generous donation from E3 Leadership Development, which made this award possible.

We caught up with Georgia to find out more about her, and this fascinating project we are very happy to be helping to support:

“I am a Senior Lecturer in sustainability, impact and consumption at Bournemouth University where I specialise in predator trophic ecology (diet) and conservation. I have worked on wide variety of species in different countries and contexts, from seabird work on Welsh islands to marine species in the Seychelles and a PhD on South African Great White Sharks to captive breeding data analysis for a zoo. My current projects include UK sharks, raptors and small mustelids.

“I started this project when I was the Head of Science and Operations for the Birds of Poole Harbour where I also worked on the Poole Harbour Osprey (Pandion haliaetus) reintroduction project. I was keen to expand my raptor research and apply the analytical skills that I gained through my PhD to UK raptor conservation and when I delved into the Kestrel literature, it was clear that there was a significant ecological knowledge gap and that the species is in need of help.

“Kestrels (Falco tinnunculus) have declined in the UK by an estimated 46% and it is unclear what is driving current declines. Much of the UK Kestrel diet literature is potentially dated, having been produced several decades ago, and habitats and prey availability have likely changed. Kestrels are adaptable, and any landscape/prey availability changes may have resulted in adoption of novel diets, with unknown fitness consequences. Contemporary diet data for Kestrels are required to bring the scientific community, conservation managers and policy makers up to date and provide the best information to aid in the halt of UK Kestrel declines.

“Previous studies of Kestrel diet have mostly centred on pellet analysis, where indigestible prey remains such as bones and fur are regurgitated by the birds and can be collected and identified. This is a lengthy and detailed process! I’ll be combining and comparing pellet dissection with stable isotope analysis of feathers. Stable isotopes are elements that get passed up food chains, meaning “you are what you eat”. Predator tissues like feathers can provide information on what the predator has been eating and which habitats it has been hunting in and represents what the animal has actually consumed rather than what it has left behind. This technique will be more sensitive to invertebrate prey such as earthworms. Under licence from the British Trust for Ornithology and in collaboration with raptor ringer and expert Jason Fathers of Wildlife Windows, I collected pellets  from underneath nest boxes and feathers from 50 kestrel chicks across several locations in Dorset.

“The Marion Paviour Award will allow me to conduct stable isotope analysis of the feathers and compare the results to traditional analysis of the pellets. In the long term, this project will provide important information for kestrel conservation across land use types. Thank you to the Hawk Conservancy Trust for your support!” 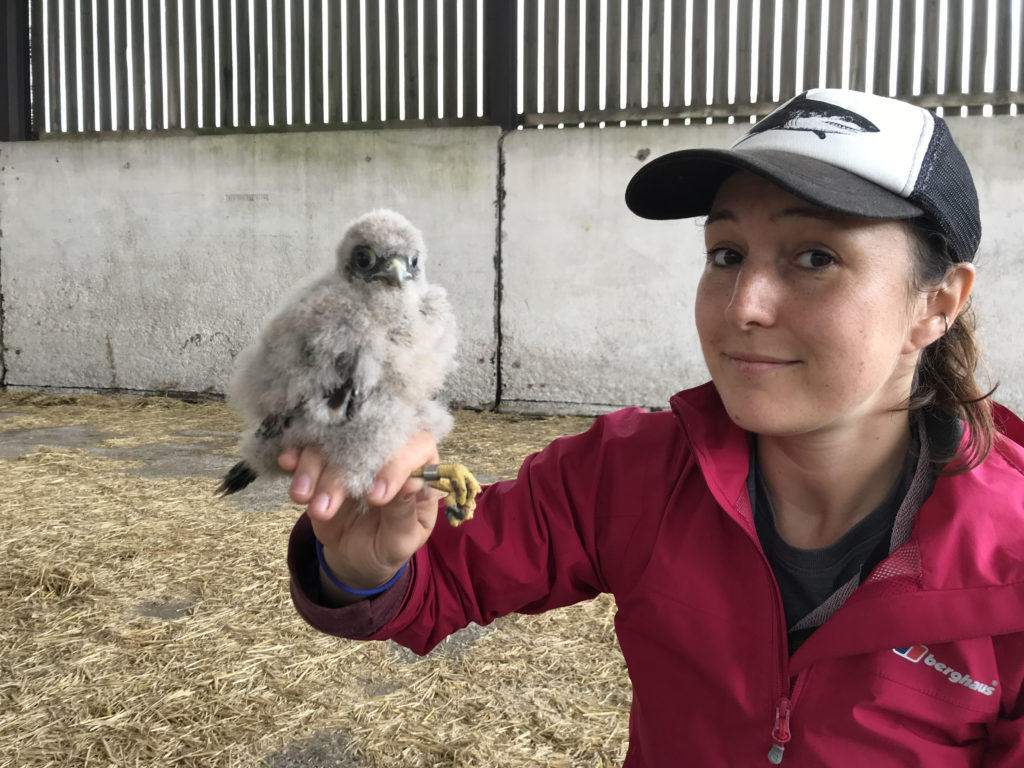