Simba is a young male African White-backed Vulture who hatched here at the Trust in 2019. His parents live in our large Vulture Restaurant aviary so, if you’re lucky, you may have seen him in the nest as a youngster. Last year, we paired Simba up with Ria May and Mike Riley from our Bird Team for training, and we’ve caught up with Ria here to get an insight about how he’s getting on:

“I remember first seeing Simba as a chick when he was just a few days old on our nest camera, it was so exciting! African White-backed Vultures are classed as a Critically Endangered species which is why it is so important that we are able to breed them here and continue our valued work in contributing to the European Endangered Species Programme (EEP). This is a programme between European Zoos that manages the breeding of this species to ensure there is a healthy captive population, should the worst ever happen to their wild counterparts.

Until he reaches maturity, Simba will be an ambassador for his species by taking part in our flying displays here at the Trust. I was really excited when I was given the opportunity, along with my colleague Mike, to train and work with him to achieve that goal. Since starting that process, he has always been a really confident character, even around new people. We began working with him in the aviary and asking him to jump to the scales, in order to monitor his health and weight. He quickly progressed to flying on a training line (known as a creance) and then to flying free. This is the most exciting part, though always filled with nerves and anticipation for us too.

Since his first free flights, he has continued to progress, building fitness and learning how to really stretch his wings. Mike and I have been working with Simba to encourage him to fly in large circuits around Reg’s Wildflower Meadow. Our hope is that, in the near future, he will start to make appearances in our Wings of Africa display alongside our other African White-backed Vultures, Cassius and Clay, teaching people about the importance of conserving these majestic birds. We’re sure he’ll be a real star of the future!” 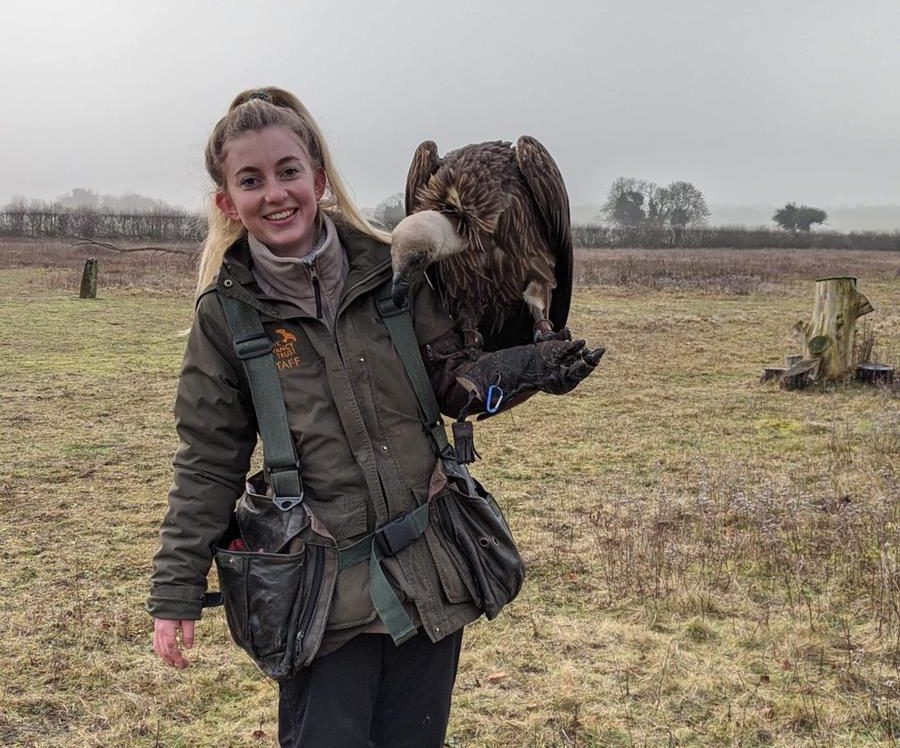