Behind the scenes training with Irwin

Last year we were delighted to welcome two young Black Kites to our team, Attenborough and Irwin. Training young birds is always a highlight for members of our Bird Team so being assigned this role is quite a privilege. Ben Cox was given the job of working with Irwin, so we’ve caught up with him to find out more about how the past nine months with Irwin have been:

“Training Irwin has been one of the highlights of my career so far. He is the first bird that I have ever been given the privilege to train entirely by myself. When I first met him, he was a bundle of fluff at three and a half weeks old, my heart melted and I fell in love with him straight away. Just being able to name a bird is special in itself; the theme we had for 2020 was famous naturalists. It didn’t take me long to choose his name, ‘Irwin’ named after the crocodile hunter himself, Steve Irwin, who was a huge inspiration for me growing up and one of the main reasons why I love animals so much. So for me it was a no-brainer that this was the name I chose for this bird. 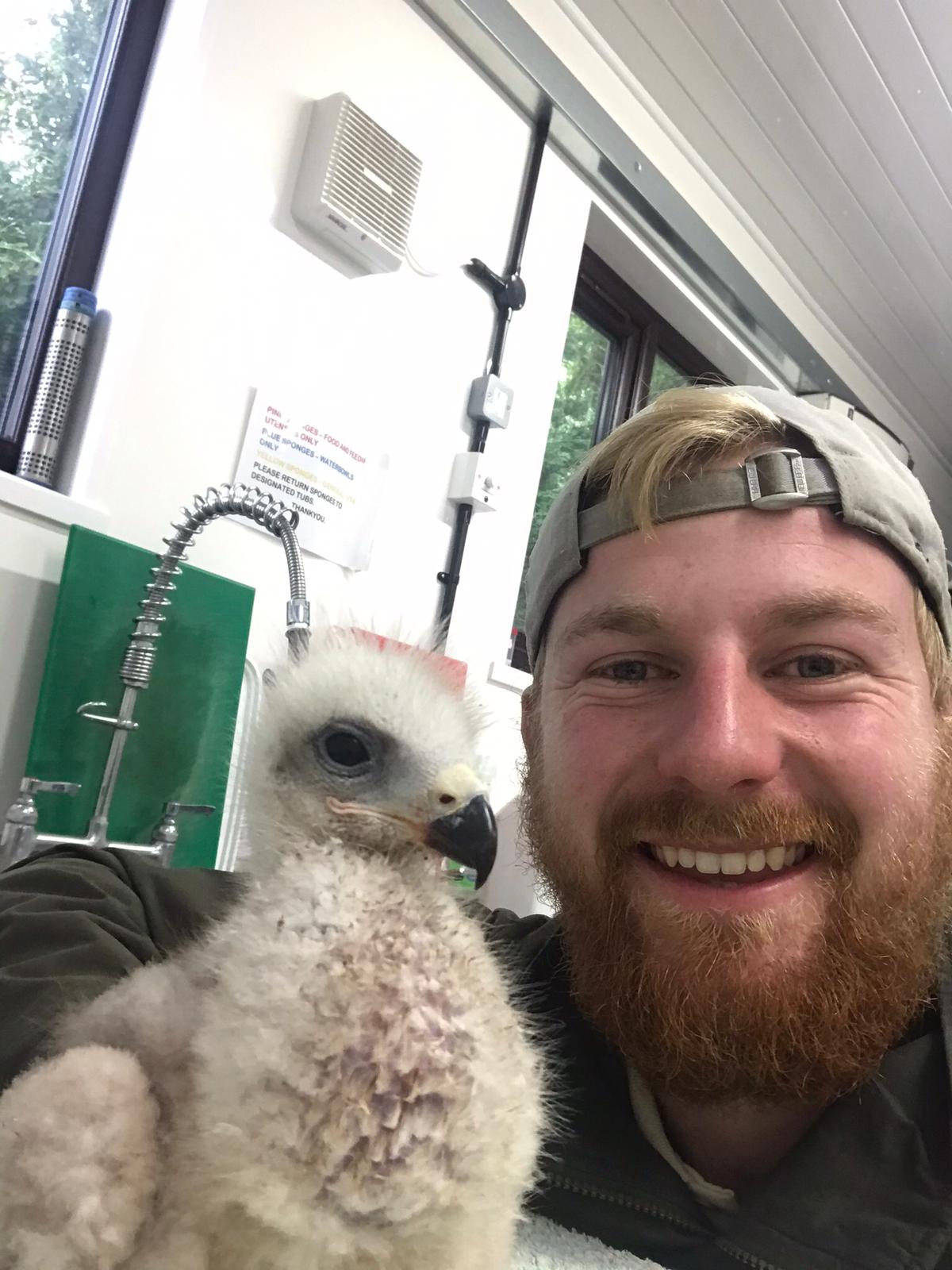 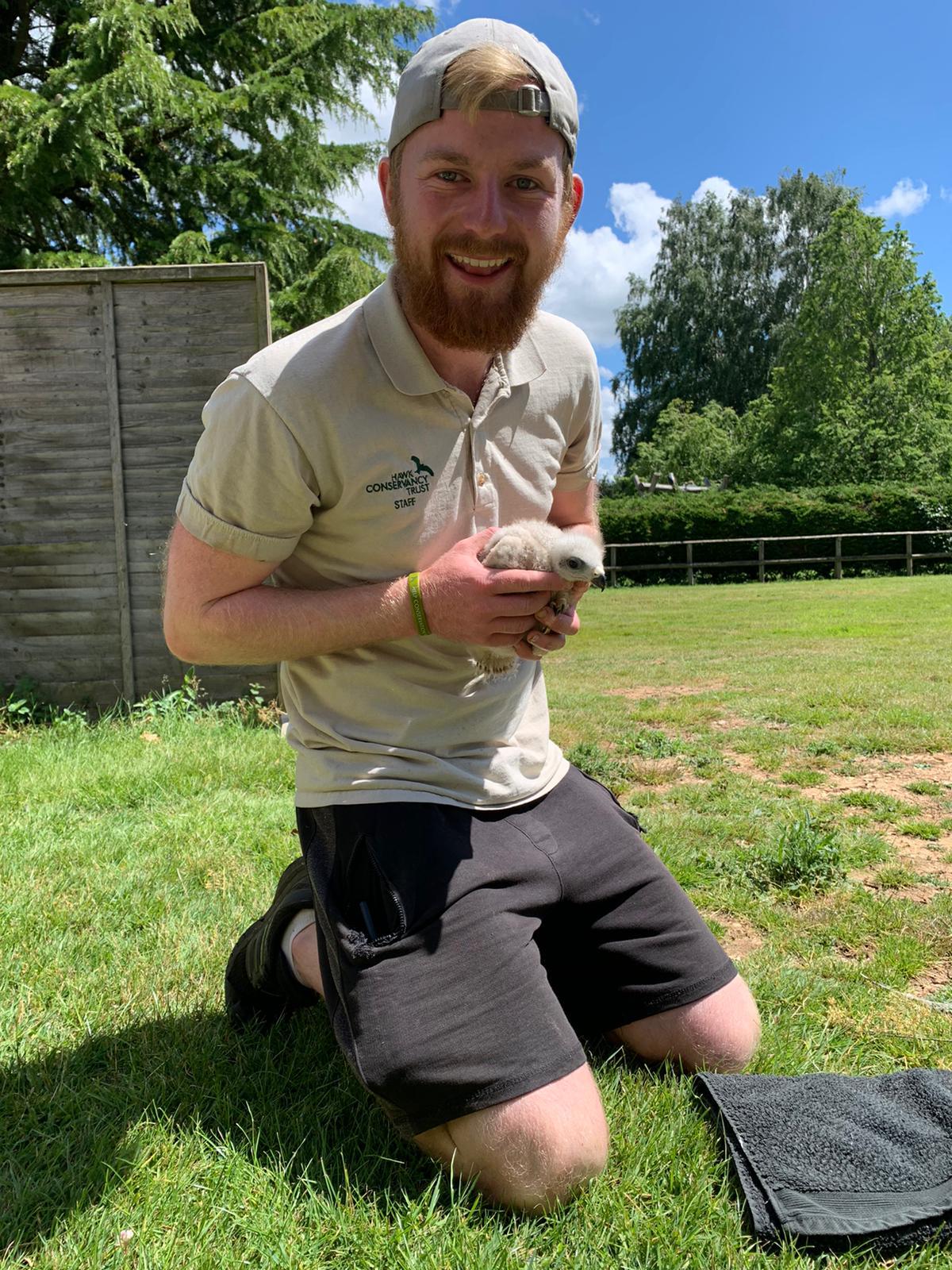 I hand-reared Irwin, which means that he is an imprint and is much more relaxed and familiar around our team and visitors. Whenever I have talked to my other colleagues about hand-rearing birds, they always told me how invested you become and it was so true! For a long time, Irwin needed feeding three times a day and required constant supervision. From the start, I tried to get him accustomed to everything that we are used to day to day, in the hope that when he was older nothing would phase him. As much as you try to achieve this, there are always small things that birds are naturally more wary of: in Irwin’s case it was wheelbarrows and trolleys. I’m pleased to say though that he quickly got past that fear and he now tolerates them as they go past his aviary.

It was an absolute privilege to watch this beautiful young bird flourish into full adult size. I love all his little milestones, whether that was gaining weight or standing up on his own two feet for the first time, or even feeding on his own. There have been so many little special moments that I will always treasure.

When he had fully developed all of his flight feathers, this for me was when the training got super exciting. Putting equipment on him was the first step which went smoothly and then getting him used to feeding sat on my glove and getting used to the flying arena. I was so impressed with how quickly he has settled into this brand new environment. Kites are often quite nervous and sensitive, however this is where we were really able to see the benefits of imprinting. As we had a great relationship, wherever I was, he felt comfortable and knew it was safe. 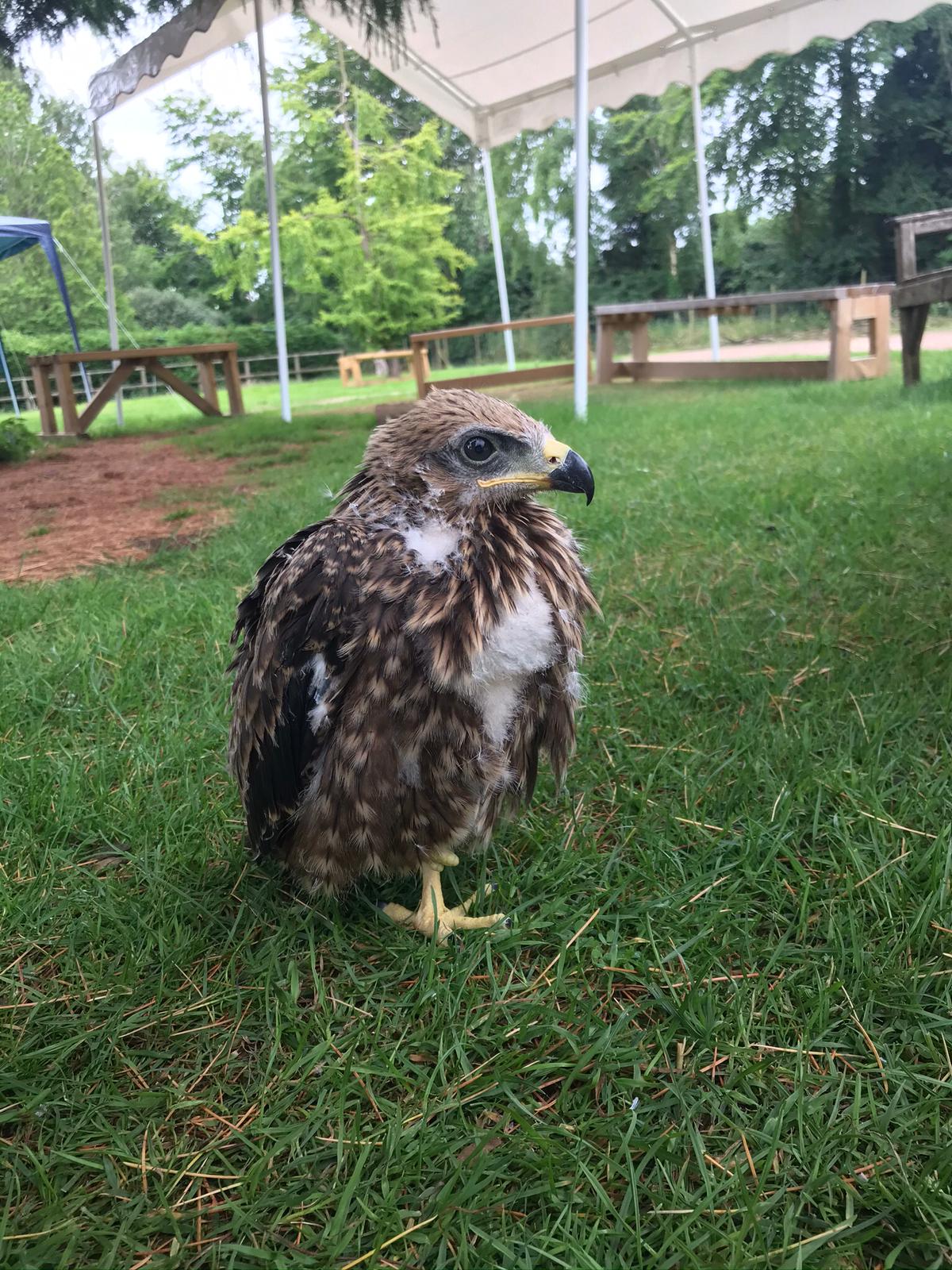 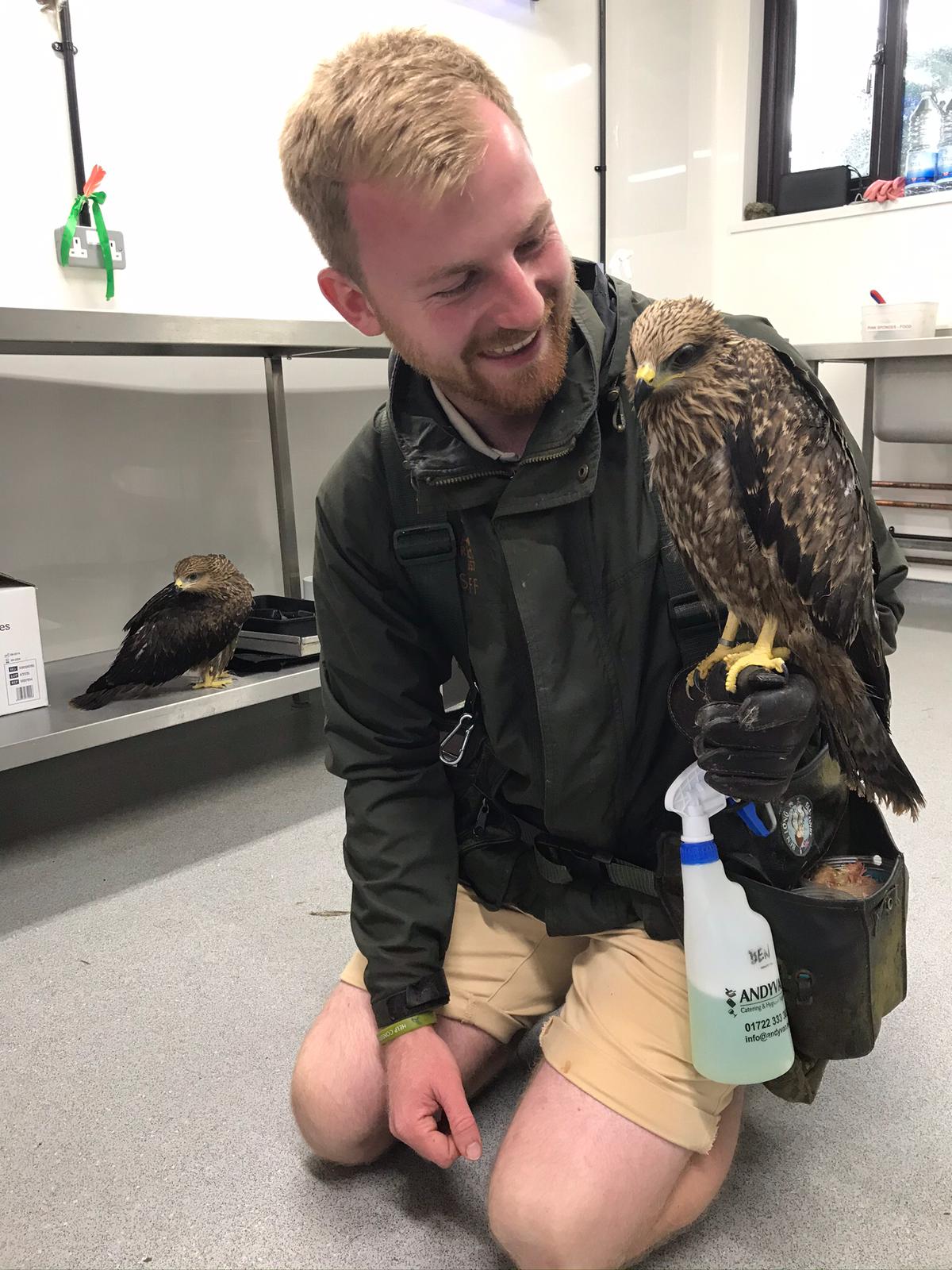 The fun of creance flying was next up in our training. The creance is a very long, light cord which we use as part of training young birds when they take their first tentative flights. Irwin wasn’t sure about the creance line at first and took a couple days to get used to it, however once he was happy with it he didn’t look back. Each day he went from strength to strength, increasing the distance he was flying each time, until he was flying to the full length of the creance.

After a few weeks, Irwin was ready to go free with no equipment at all. The night before, I hardly slept, just thinking about what might happen, would he fly off or not come back to me? I was very nervous. Then the time came, I put a GPS tracker on him (just in case) and let him go! My heart sank as he disappeared out of sight. I tried to stay calm, gave a loud whistle and almost instantly he appeared again doing a huge circuit and calling away as he saw me, before coming back and smoothly landing on my glove. What a first flight! Sensational. From that moment, I knew this young kite was special. 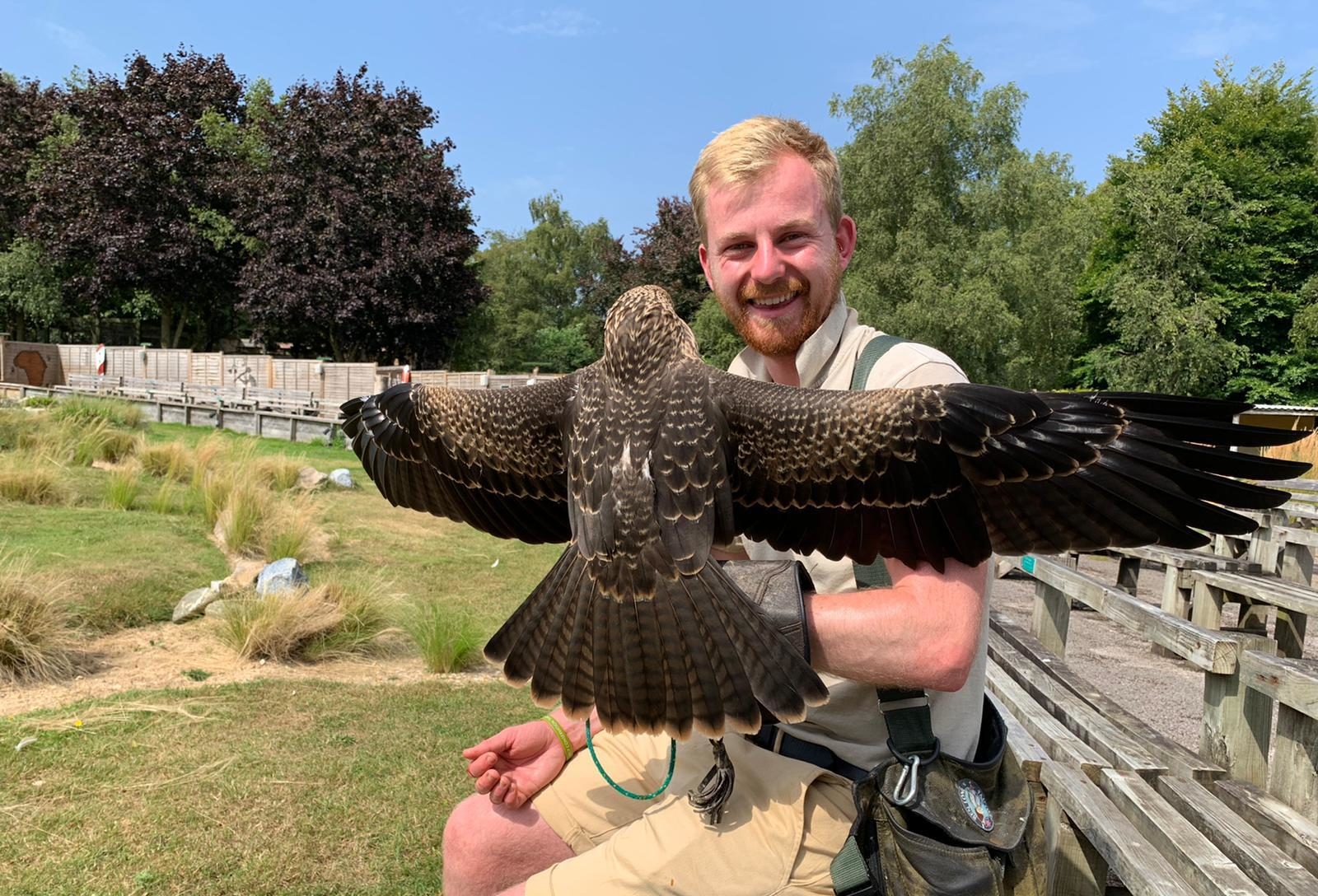 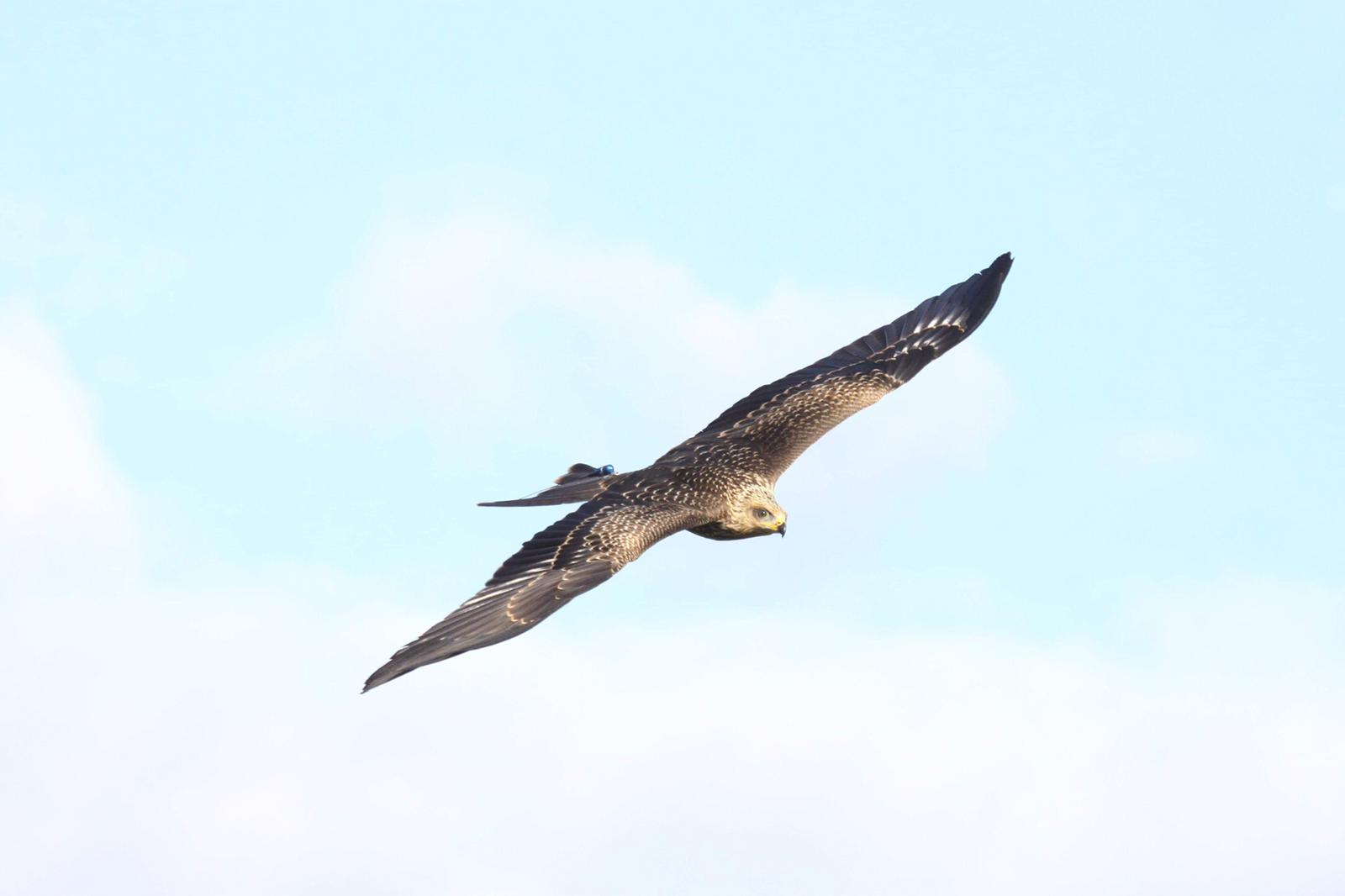 Encouraging Irwin to catch food whilst in the air was the next challenge. This, of course, is a classic trait of Black Kite that we encourage them to show off during our displays. To achieve this, I would put my glove up as if to ask him to come to my fist, then as he was approaching me I would put my glove down show him the food and throw it upwards. Timing was key and this took a little while to get right from both sides! Nevertheless, we were determined and when it all came together, we both never looked back. He started to transfer the food to his beak straight away too. I was so pleased.

He continued to impress whilst flying free. Though he did once sit in a tree for three hours, slightly disrupting the Woodland Owls demonstration that day. Oops! But he came back to my glove eventually and that’s all part of training. For that to have been the only thing that didn’t quite go to plan in his training so far, it’s all pretty good in my opinion. 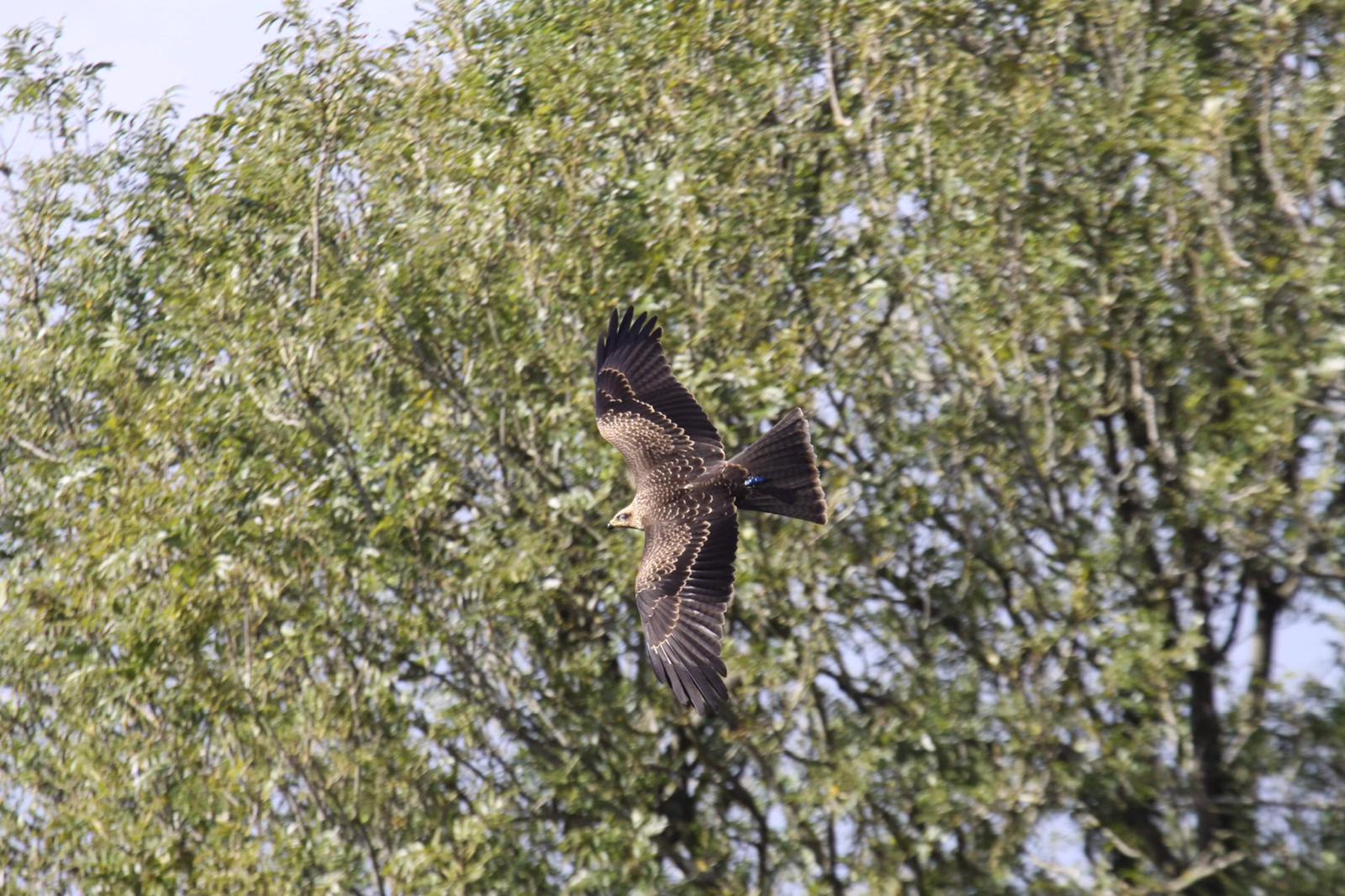 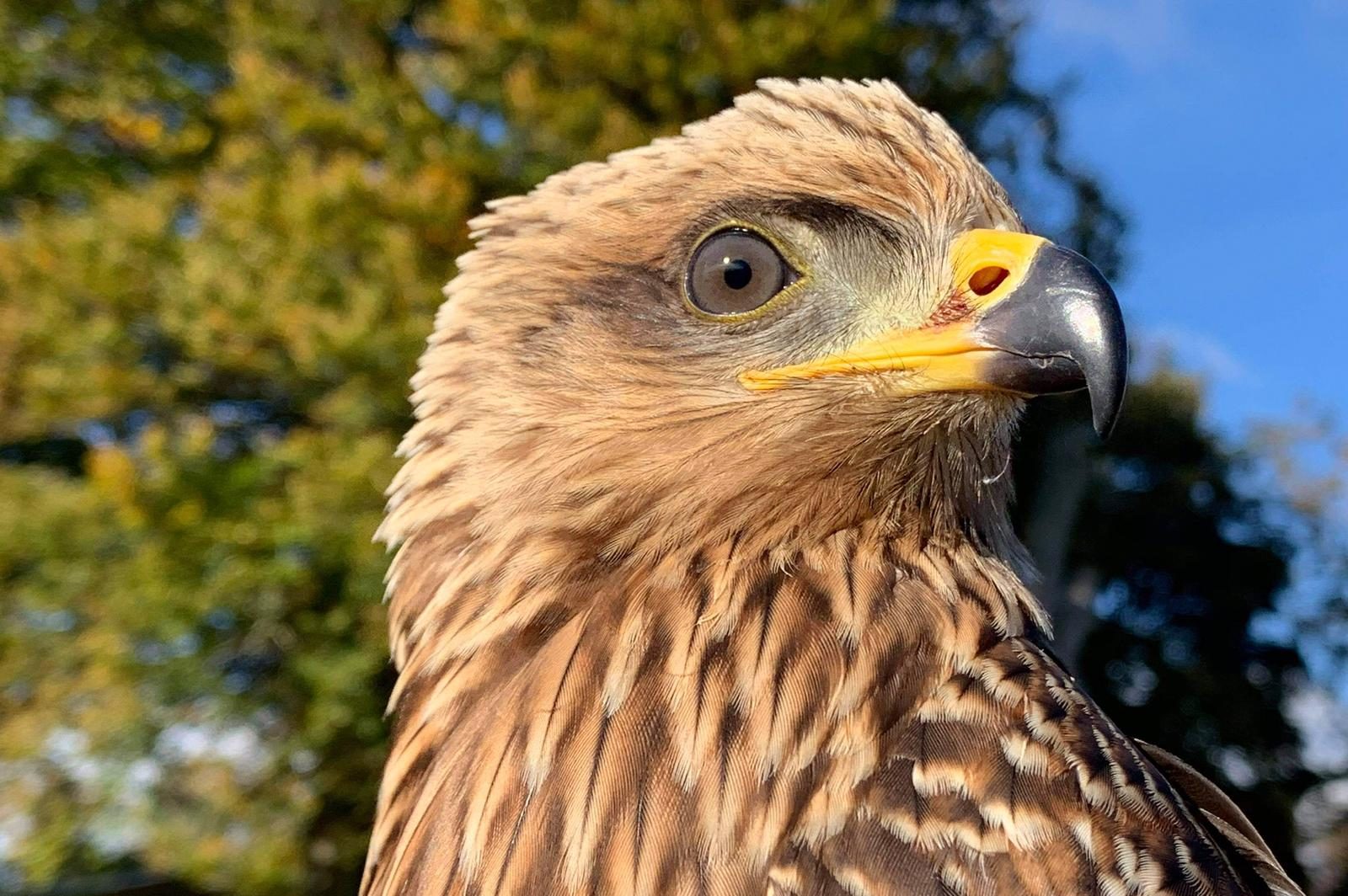 As he was flying so well, the next stage of his training was to fly alongside the main team of Black Kites in a demonstration. This was extremely nerve-racking: I didn’t know how he would respond and how the adults would react to him. Thankfully, all went perfectly and he flew his little heart out as usual. To say I was proud of him would be an understatement, I am in awe of this young bird and how strong and confident he is!

Now he is a fully established member of the main team and has recently moved in to live with them in their aviary (watch the video below to see how this first meeting went). I couldn’t be happier, I will never forget what Irwin has done for me in terms of teaching me so many things when training a bird. I can’t wait to continue to watch and fly him for many years to come here at the Hawk Conservancy Trust.”