First ever records of Egyptian Vulture migrations in Central Asia!

We are very excited to be able to share the initial results from this project, showing the first recorded migration routes of Egyptian Vultures in Central Asia.

Three tagged Egyptian Vultures surprised us with some fascinating results; they each took very different routes after they fledged in September 2021, with one traveling more than 6000km!

Four birds were fitted with GPS satellite tags, to identify the routes they take during migration and where they spend the winter. This project is run by Dr Robert (John) Burnside at the University of East Anglia, Vladimir Dobrev (Bulgarian Society for Protection of Birds), Anna Ten and Valentin Soldatov (Institute of Zoology, Uzbekistan). We thrilled to be involved in this important research, by helping to fund satellite tags to fit to some of the vultures, and sharing exciting updates and news on the project.

In August 2021 the field team traveled to already identified breeding grounds in the Kyzylkum Desert, Uzbekistan where they fitted tags to four young birds almost ready to fledge, whilst still in their nests. Read more about the birds Bukhara, Timur, Anya and Arys. 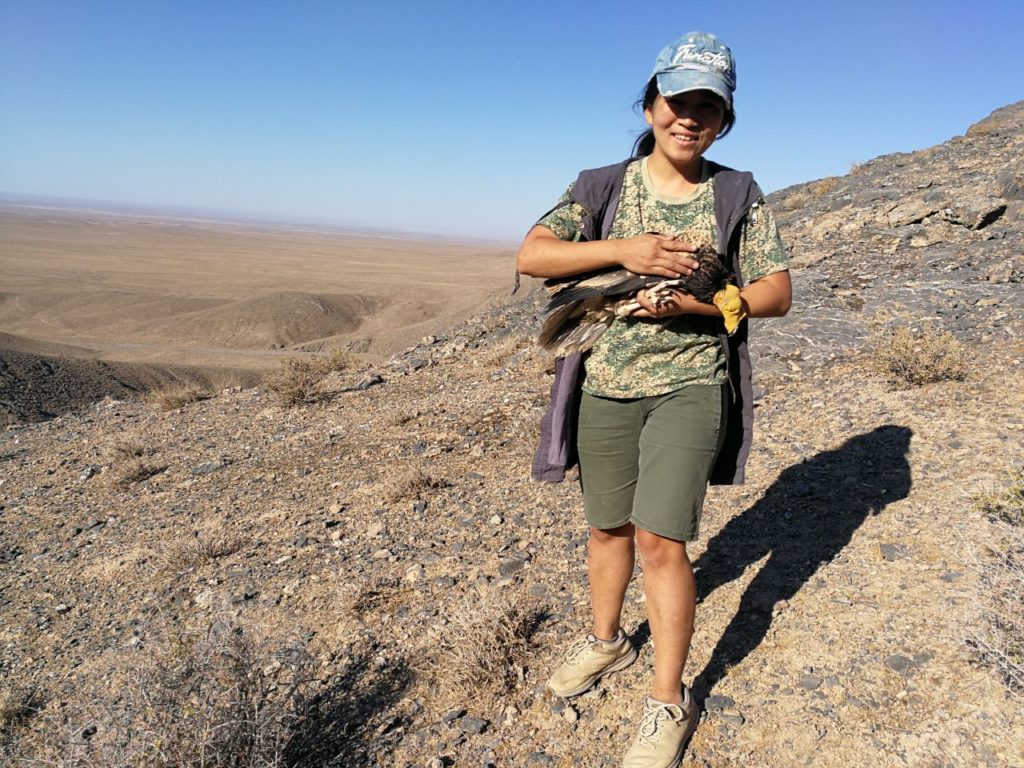 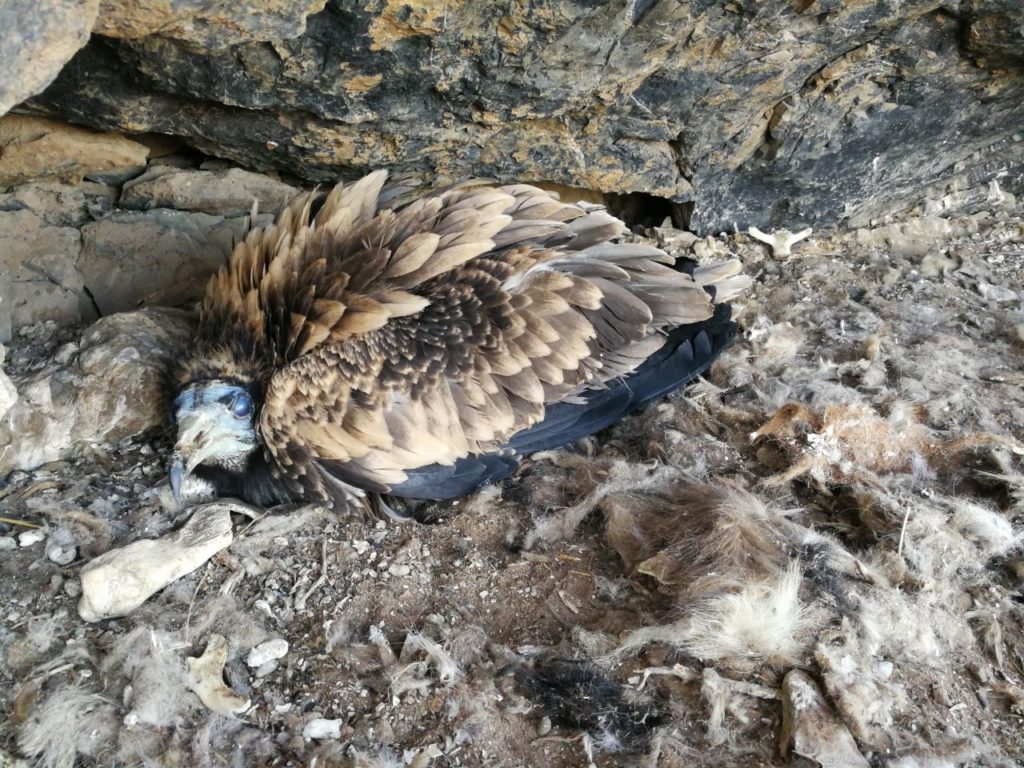 Of those four birds, we were able to gather data from three transmitters. Each of the three birds took very different routes after leaving their nests, with some surprising results! All three birds moved south initially, through Turkmenistan. Anya then popped into Iran and moved south through Afghanistan and Pakistan and into India, flying around 2300km. Arys travelled approximately 1500km, south through Afghanistan and Pakistan, and both birds ultimately concluded their journeys to winter in northern India.

Timur, on the other hand, took a very different route, with an incredible 6200km journey in total! After leaving Uzbekistan and passing through Turkmenistan, he made a much longer journey further to the west with several stops, pausing in Iran, then continuing around the Persian Gulf through Iraq, Kuwait, Saudi Arabia, eventually settling in Yemen in late November 2021. 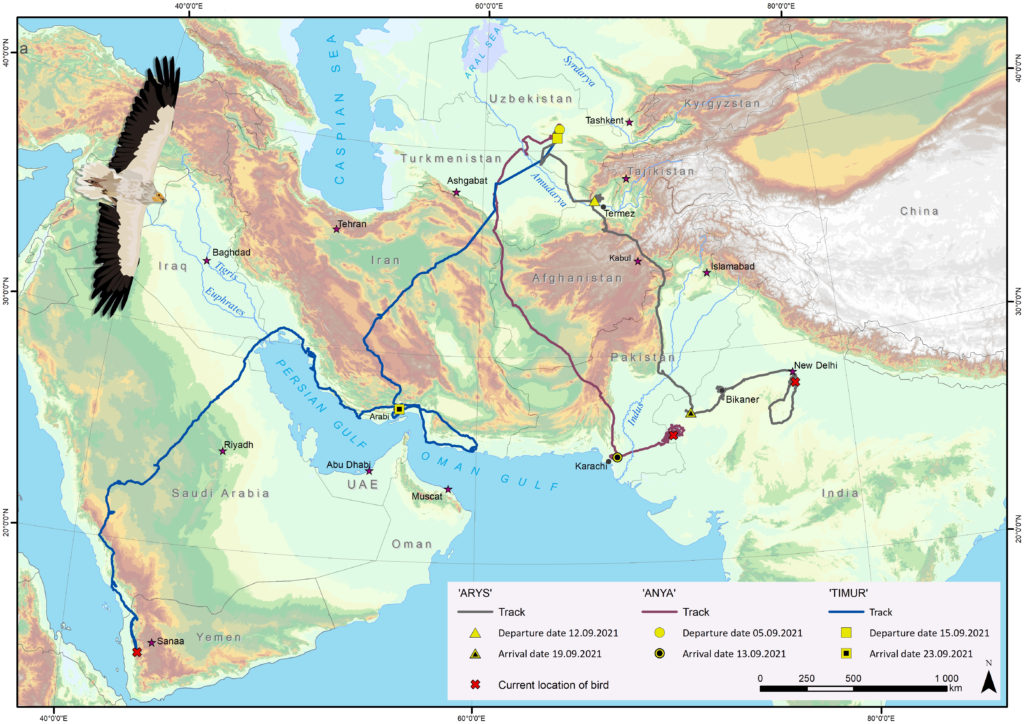 This is the very first time Egyptian Vulture migrations in this area have been recorded, and we are enthralled by the results. The routes taken by Anya and Arys confirm that some central Asian vultures follow the central Asian flyway to join resident populations of Egyptian Vultures and spend winter in Pakistan and the Indian subcontinent. Their behaviour during the journeys has been interesting to document, especially Arys, who has spent quite a bit of time in manmade habitat, such as carcass dumps and near livestock facilities. One area in particular, called Bikaner, in India is famous for attracting thousands of vultures and Steppe Eagles during the winter months. It seems Arys is quite the tourist, as towards the end of December, he visited all three cities in the Golden Triangle in India: New Delhi, Jaipur and Agra. He then flew over the India Gate and even within 200m of the world famous Taj Mahal! 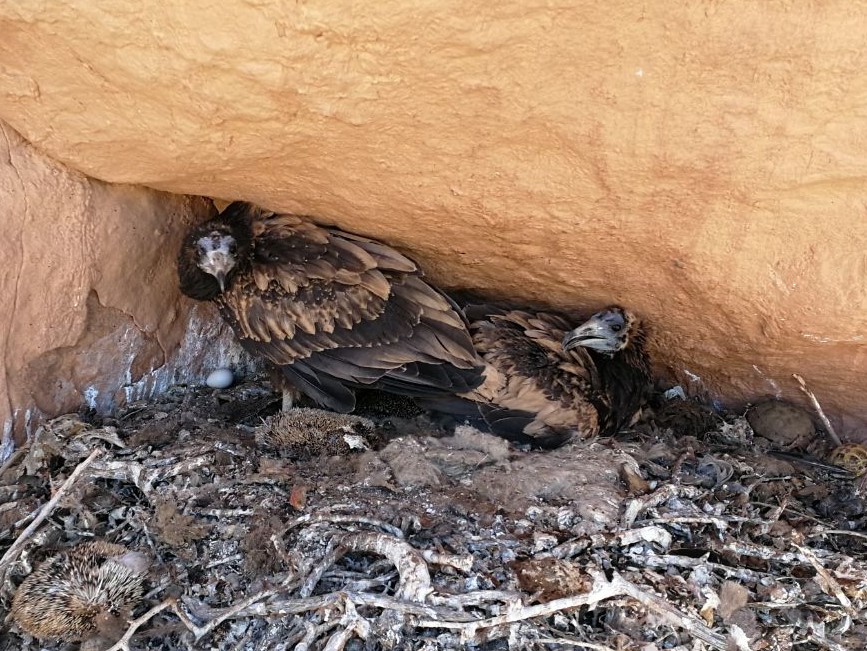 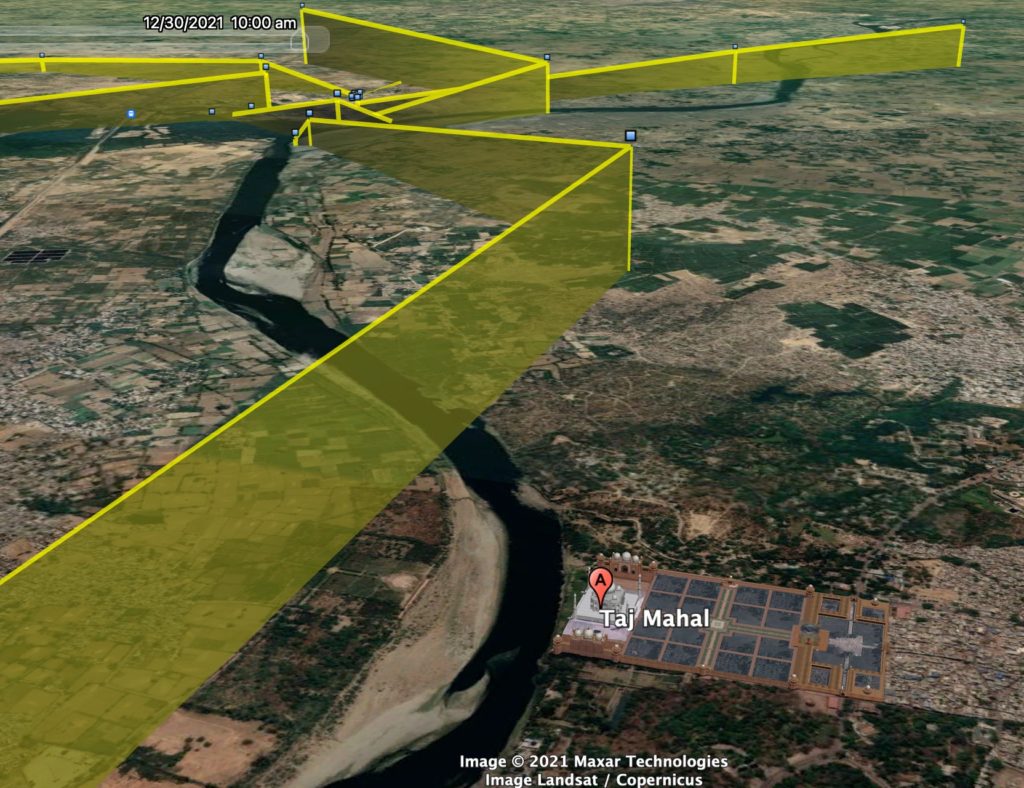 Anya took a more traditional approach to her migration, taking a direct route south from Uzbekistan, avoiding mountain crossings until she reached the Rann of Kutch, near Karachi in Pakistan. This area is known for Egyptian Vultures, however Anya only stayed here a few weeks before venturing over the Indus river into the Thar Desert in India, where she concluded her journey.

Something quite unexpected was how far Timur traveled, into Yemen and the Middle-East. This is a major finding for Egyptian Vulture biology and establishes for the first time that the central Asian populations are connected to the western Egyptian Vultures that live in Europe, the Middle-East and Africa. As so little is known about central Asian populations, we are unsure whether birds often migrate as far as Yemen, or whether they would usually spend winter in Iran and Timur’s epically long journey is nomadic behaviour as is sometimes observed in younger birds.

Sadly, one bird, Bukhara, has been silent since tagging and we have not picked up any data for this bird. It is difficult to know what may have happened to Bukhara but it is likely that the tag has malfunctioned, and we are hopeful that he is still alive.

Migration is an extremely dangerous time for birds; Egyptian Vultures face a range of threats when flying across sea and land such as drowning, hunting, poisoning and electrocution. So far, we have learnt that the picture is much more complex than we anticipated. Although these three birds are just the beginning, the results from this ground-breaking research are absolutely invaluable for their future conservation.