Our achievements for birds of prey in 2021

Despite the challenges we (and many others) faced in 2021, we’re incredibly proud of what we achieved for Critically Endangered vultures, and for our wonderful British birds of prey, both in the wild and in the National Bird of Prey Hospital™.  As we head into 2022, we take a look back at some our accomplishments in bird of prey conservation over the last year.

January – Our UK Conservation Biologist Dr. Matt Stevens spends this month repairing and replacing nest boxes for the new breeding season, of which we have now installed over 1,000 boxes for Kestrels, Barn Owls, Tawny Owls and Little Owls!

January – We were so excited to spot our pair of White-backed Vultures, Angus and Satara incubating a brand new egg. This pair are wonderfully dedicated parents!

January – We kicked off the New Year with our first releases of 2021; two Tawny Owls, two Kestrels and a Buzzard were successfully rehabilitated in our National Bird of Prey Hospital™ and released back into the wild.

February – Our podcasters Hannah and Tom hosted Nature’s a Hoot Live: Kestrel Special, a documentary about our conservation work with wild Kestrels. Tom went along with our Conservation Biologist Matt out in the field, to find out more about this iconic species.

February – This month we start our spring bird of prey surveys, where Matt and Hannah from our Conservation and Research team, along with volunteers, get out to survey wild birds of prey in southern England.

February – Happy news from Changa Manga, there are now three healthy chicks at our Asian White-backed Vulture breeding centre in Pakistan! The most recent chick hatched in late February.

March – We were overjoyed to spot a new chick in our White-headed Vulture aviary. Our breeding pair, Angus and Satara, are renowned for being incredible parents, successfully breeding and raising chicks for the past six years! They are part of the European Endangered Species Breeding Programme for their species, a breeding program for threatened species in zoos and collections across Europe.

March –A WILD Asian White-backed Vulture turned up at our Changa Manga breeding centre in Pakistan! This bird is the first one seen here in 10 years! 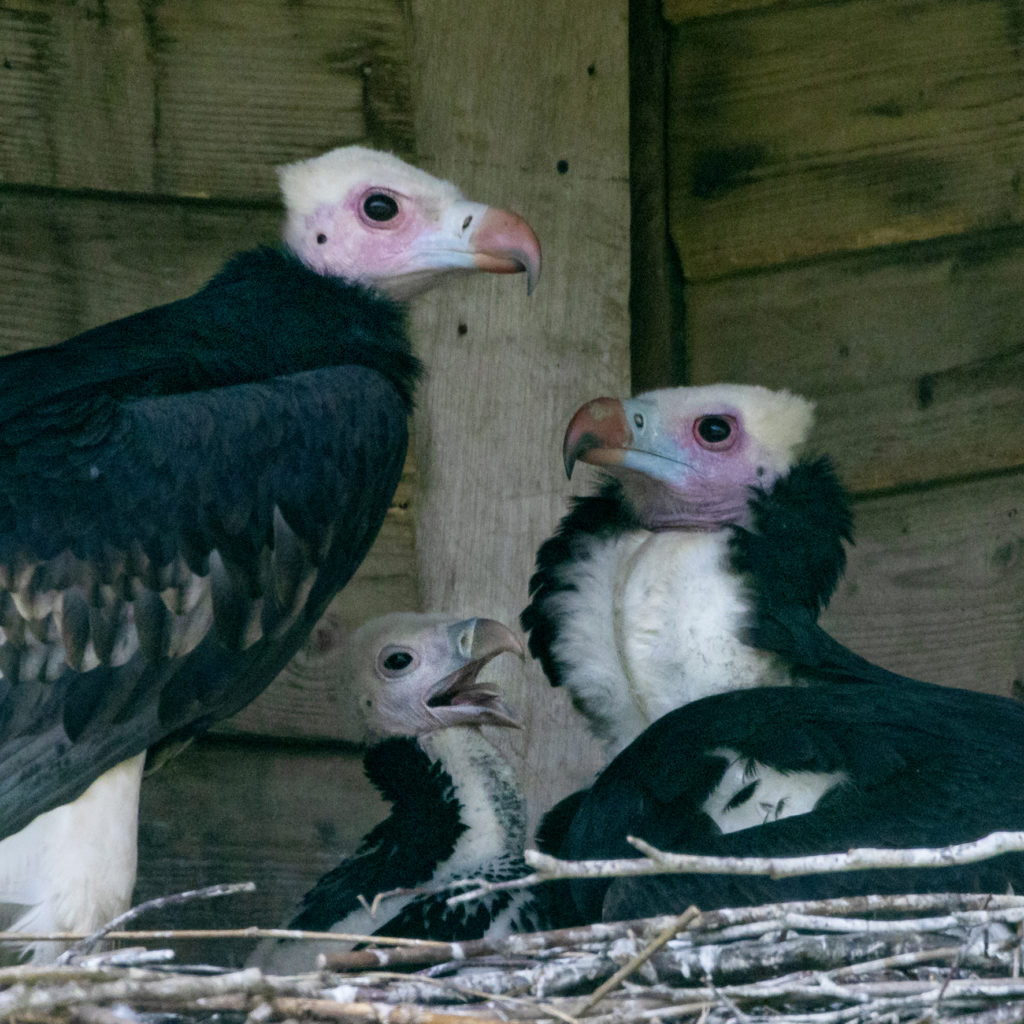 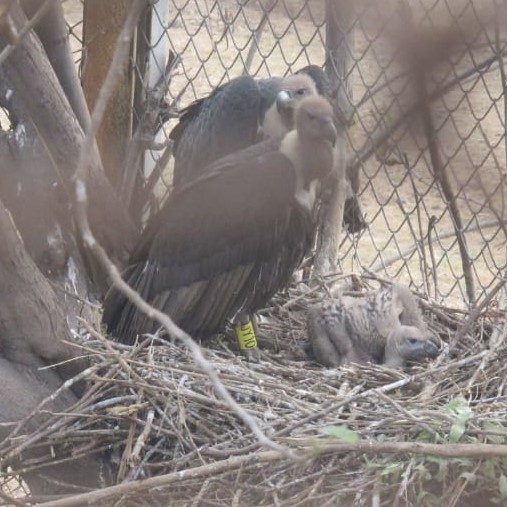 April – We joined a new collaboration for an exciting overseas conservation project identifying migration routes and wintering areas of Endangered Egyptian Vultures in Central Asia! We are helping with this project by providing satellite tags to fit to the vultures.

May – This month was one of the busiest for our project providing nest box homes for birds of prey. Our Conservation Biologist Matt spends most of his time checking the nest boxes, ringing and measuring chicks, and gathering data about the conditions inside the boxes such as temperature and moisture level.

June – Our Project Officer Andre Botha travelled to Mozambique to deliver Poison Response training in Niassa Reserve. We have now trained more than 2500 staff working on the ground in southern and East Africa to respond to poisoning incidents.

June – June was our busiest month at the hospital in 2021 with over 30 admissions! Many of these were Tawny Owl chicks, but we also saw a Peregrine Falcon, a Hobby and a Little Owl, three species we don’t see quite so often.

July – This month surprised us with two separate Goshawk admissions to the hospital! This was particularly exciting because Goshawks are a species we rarely see brought into our hospital.

July – As of July in Changa Manga breeding centre, there were a total of 27 birds in the colony, 12 of which hatched at the centre!

August – This month we took a Hobby into our care at the hospital, found near a road after a suspected collision with a car. We are happy to report that it recovered quickly and was released back into the wild!

August – The first season of fieldwork on the new Egyptian Vulture Project was completed in Uzbekistan, four juvenile Egyptian Vultures were fitted with GPS satellite tracking units so we can follow their movements after fledging. Find out more about this project. 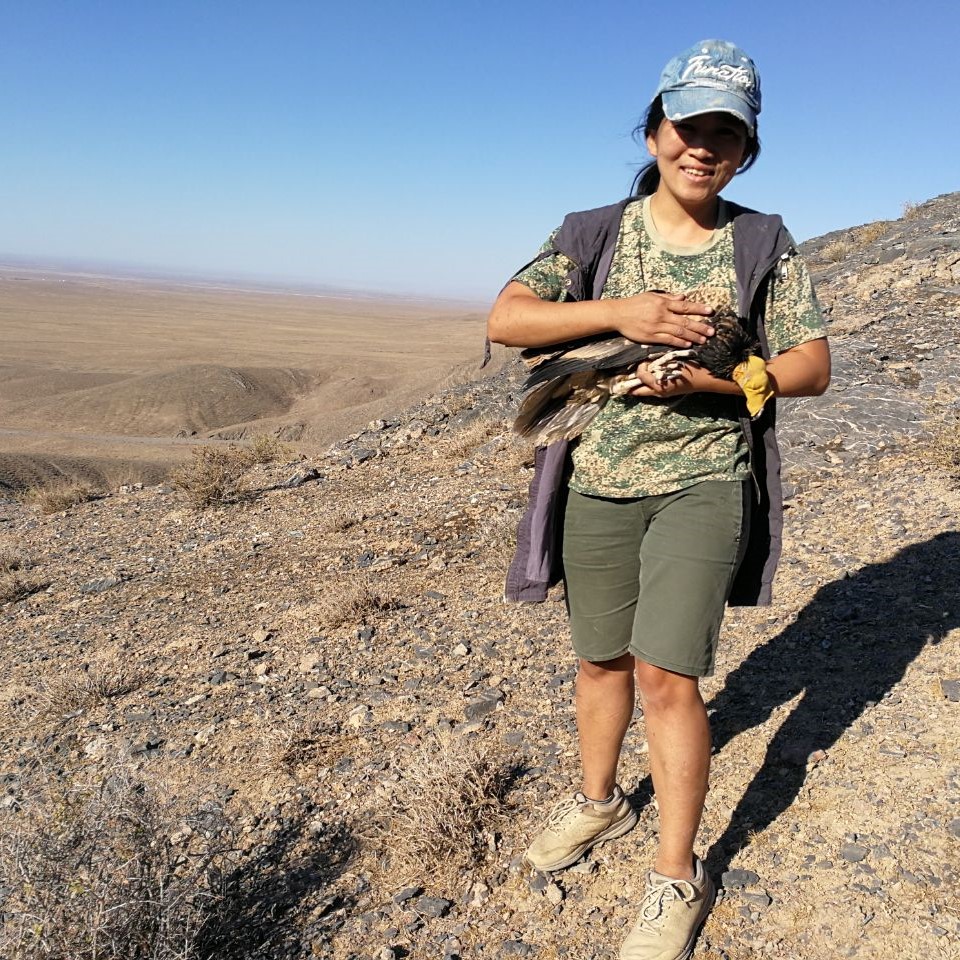 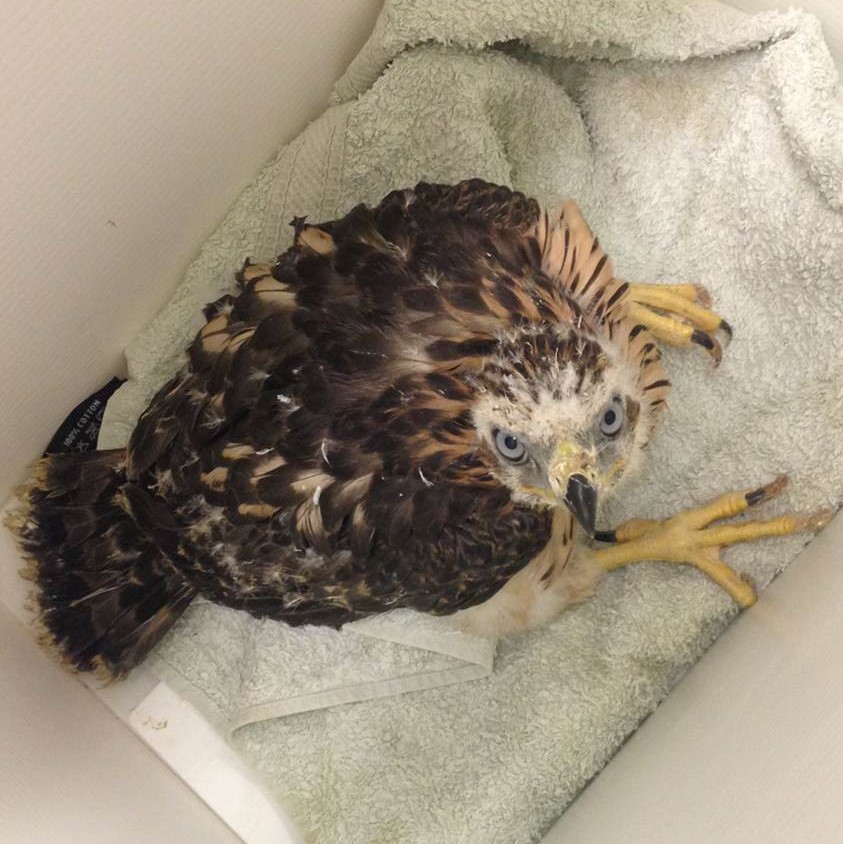 September – The annual event International Vulture Awareness Day went off with a bang! This event is always popular, with vultures flying in all our displays and we raised an impressive £700 towards our overseas conservation projects with vultures.

September – We launched an exciting new project called Explore Nature. This venture provides school students, who would not usually have the opportunity, with a day at the Trust learning about practical wildlife research and conservation. In this pilot, we welcomed three different schools, and 47 students took part in this brilliant new educational activity. Supported by Investec.

September – Due to the generous donations of both Animal Friends Pet Insurance and Life Members Graham and Rita Morgan, we began building a Hospital Annex. This will further expand our facilities and allow us to improve our biosecurity measures.

September – A second vulture-safe drug, tolfenamic acid, was identified for use to treat cattle, in addition to existing safe drug meloxicam! This gives veterinarians and livestock owners more options for treating their cattle without harming vultures, which is fantastic news for vulture conservation in Asia.

October – Our Science Communications Intern, Rilee, helped release a successfully rehabilitated Red Kite from our National Bird of Prey Hospital™ back into the wild. Watch the release.

October – Our Conservation and Research Intern, Katie completed a season of fieldwork conducting small mammal surveys across three sites, to find out what prey is available for our local birds of prey.

October – We received a generous donation of a staggering £10,000 from Animal Friends towards our Poison Response work. This will help us to deliver Poison Response training in southern Africa in 2022, and to start developing an exciting new project to protect vultures in South Africa.

November – Our annual Marion Paviour Award was awarded to Jaime Carlino, from Humboldt State University in the USA. Jaime is studying Barn Owls in California, where they prefer to nest, how healthy they are and what effects this has on how successfully they reproduce. This work is particularly fascinating for us, as it aligns with our British conservation work providing nest boxes for owls.

November – We fitted a tracking unit to a Buzzard released back into the wild after being rehabilitated in our hospital. This allows us to track the bird’s movements and behaviour after rehabilitation.

December – We were thrilled to form an official partnership with Investec to help support the vital work in our National Bird of Prey Hospital™ and conservation projects.

December – This month we achieved a whopping 900 total observations of birds of prey on our surveys for the autumn season!

December – The first ever Vulture Safe Zone (VSZ) has been declared ‘fully safe’ in Nepal! Vulture Safe Zones are areas that are kept safe from toxic veterinary drugs which can kill vultures, and protect important breeding populations of Critically Endangered vultures. Find out more about our work with VSZs in Pakistan. 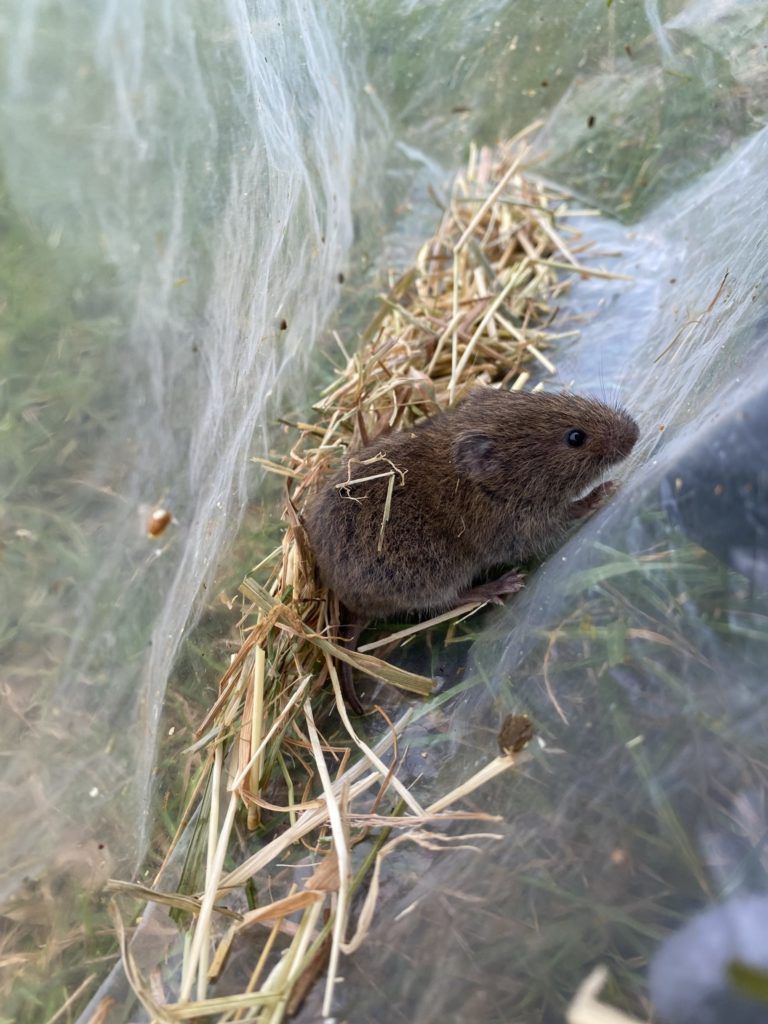 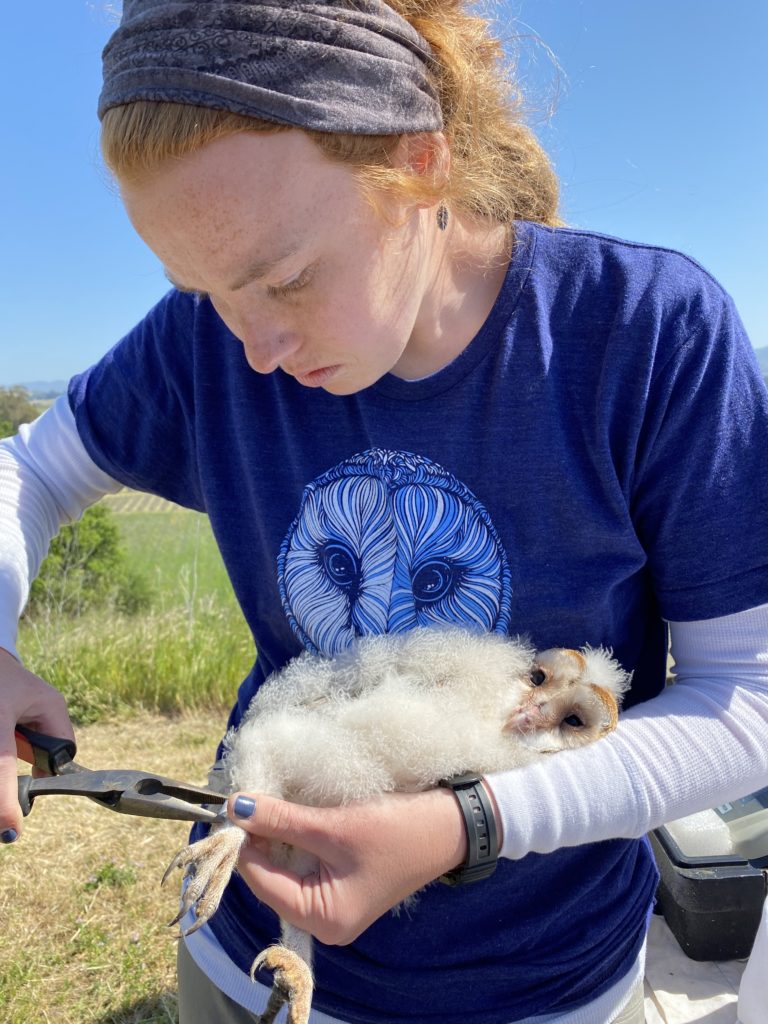