A tribute to Madeleine

We are sad to announce that Madeleine, one of our Secretary Birds, passed away last Thursday (24.03.22).  At the grand old age of 34, he reached the end of his healthy life.  The kind, yet difficult decision was taken to send him peacefully to sleep and to avoid any ongoing suffering from a heart condition brought on by old age.

Madeleine had been at the Hawk Conservancy Trust since he was a chick and as the gender confusion suggests was initially thought to be a female.  Only later did we realise Madeleine was in fact a he instead of a she!

Madeleine educated and entertained thousands of visitors over the years by demonstrating the special hunting style of the Secretary Bird, by striking our rubber snake with mighty force and determination with a deadly kick!

He was probably the only Secretary Bird in the world that took an active part in scientific research and an experiment to measure the speed and force of his kick.  He even appeared on the One Show on BBC One, where his kick strength and speed was compared to a champion human kick boxer.  Needless to say, the kick boxer was outdone by Madeleine. 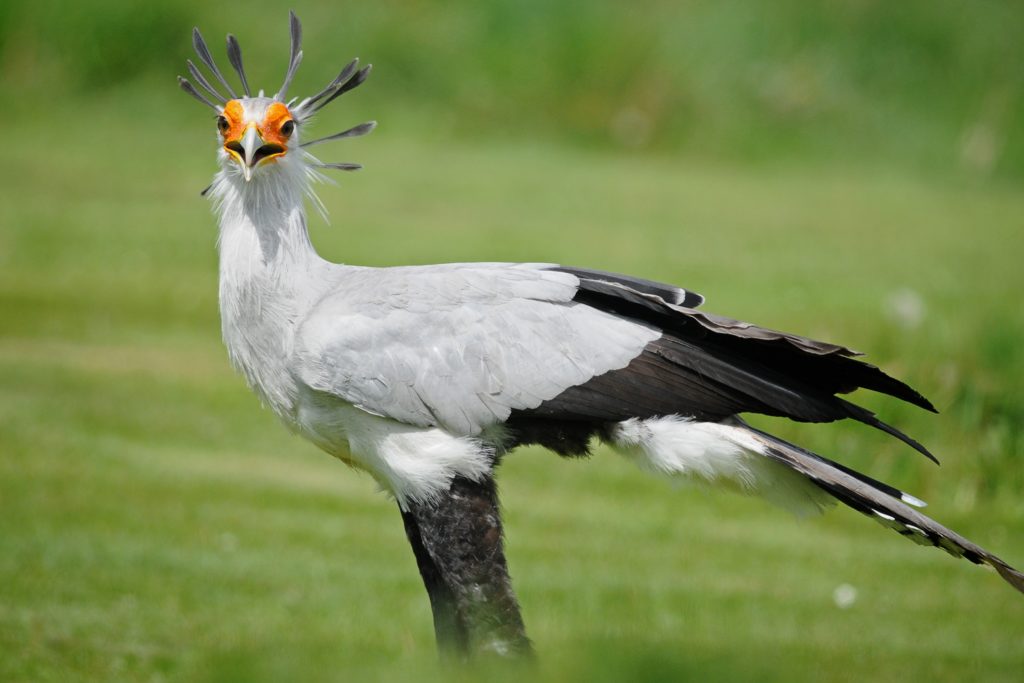 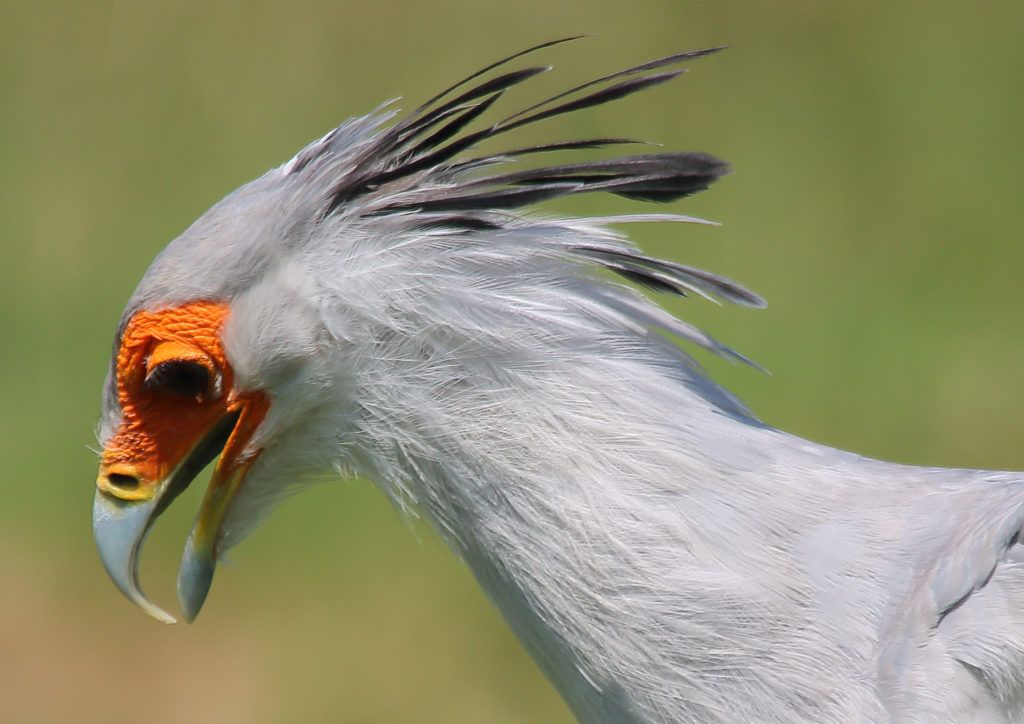 He was full of character and loved by so many at the Trust.  Ashley Smith, founder, shares some of memories of him.

“I was very sad to hear of the passing of Madeleine, who was one of the stars of the Trust displays for many years. His unusual looks and hunting style made him a firm favourite with visitors. From my distant memory I believe Madeleine arrived as a chick in the summer of 1987. He was still in the nest and only a few weeks old.  Every day he would be taken out from my mother’s rearing room, which was located in the spare bedroom of the farm house, by a young student volunteer. Their sole responsibility was to look after our new, precious bird.  This meant feeding it copious amounts of mice, carrying Madeleine to his artificial nest site outside into the grounds and then spend the day sitting next to him.  He would sit in the nest observing the visitors as they walked by.  Secretary birds love the sun and we felt it was important for him to have as much sunshine as possible to help him grow.

After many weeks of patiently waiting and hoping that he would eventually try to stand up, the call came on the radio.  We gathered around the nest and after about 15 minutes, just like a foal, he managed to stand precariously on his incredibly long legs. Our young volunteer, who was called Madeleine, was so delighted.  We named him after the volunteer who had cared for him so well over the summer. Of course, we later discovered that Madeleine was a male Secretary Bird!

One of my favourite memories of Madeleine, was as he was learning to fly across the arena. All was going well, however on this particular afternoon a hot air balloon flew over the grounds, Madeleine decided he didn’t like the balloon and took to the air, spiralling in ever larger circles. I followed him as he headed towards the A303 dual carriageway and a few minutes later, I found him walking along the west-bound carriage way. Thankfully, the cars had come to a complete standstill. I approached him, picked him up and started to carry him home. The whole carriageway had stopped with people watching what was going on. I guess it’s one thing to see a Secretary Bird walking down the central reservation, yet quite another to see a man carrying a Secretary Bird walking down the central reservation! Luckily the driver of a long articulated lorry jumped out and said ‘would you like a lift mate?’ I duly climbed up into the cab with Madeleine, who seemed not to have a care in the world, and sat there pecking at the man’s arm as we were chauffeur-driven back. When we pulled into the car park, the driver said ‘you know my wife is never going to believe this when I tell her.’

I arranged for the lorry driver to have a complementary ticket and he visited on many occasions with different family and friends to see Madeleine and recount his good deed.  I have so many other special memories of him that I will cherish forever and I will miss seeing him on my visits to the Trust.” 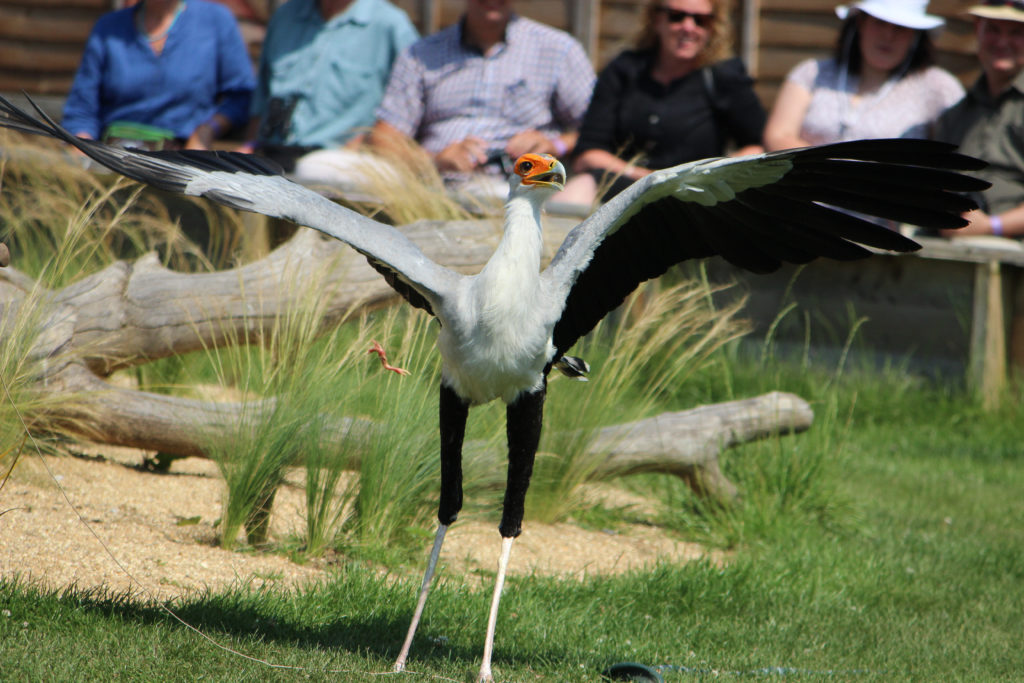 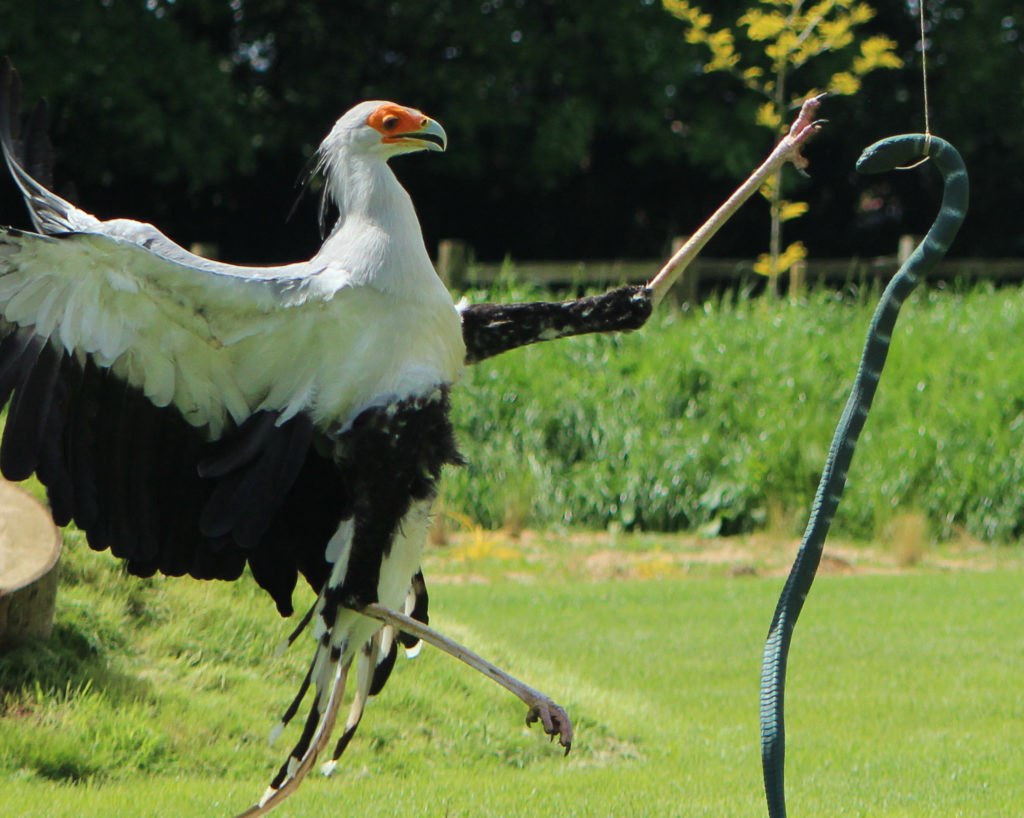 Both Miriam Nicholls and Simon Christer, from the Bird Team, recall fond memories of working with him.  Miriam says “Madeleine was a huge character, just a lovely bird. He got a lot softer in his older age. He will be really missed by all the Bird Team, especially those that knew him well, as well as his dedicated sponsors Thelma and John Cobbold, who have a daughter called Madeleine.”

Simon adds “Madeleine was a massive personality. He liked to be close to any Bird Team member who went into his aviary, not leaving your side and following you around as you worked. Occasionally, as you worked you would feel a bob on the shoulder or back. His nesting behaviours meant whenever you mowed the grass in his aviary he would always end up dragging most of it into his house! He even did this with larger objects – anything big went inside. Everyone in the Bird Team loved going into Madeleine’s aviary and saying hello to him.”

As we say goodbye to Madeleine and to represent the end of an era at the Trust, we will ensure a fitting tribute is located at the Trust, for the many who wish to remember him by.