We often talk about the bond that we build with the birds on the bird team – a working relationship built on confidence and trust from both sides is vital if our birds are to be properly cared for. The strongest of all of these relationships, I think, are the ones built from the very beginning.

One of the most special things we do as part of our job on the Bird Team is rearing chicks. Rearing a bird from the downy, vulnerable, fluff-ball stage to a fully-fledged master of the skies is a privilege few humans get to experience. You never forget the very first time you share that beautiful journey.

For me this was with a Tawny Owl called ‘Sage’. Those who’ve visited the Trust may be more familiar with ‘Troy’ but he shares his role with another when he needs a break or he’s busy on other ‘duties’. Sage arrived at the Trust when I did in early 2019. Having known her almost since she hatched out of the egg, I couldn’t bear to leave her behind in Northampton! 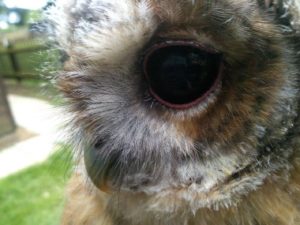 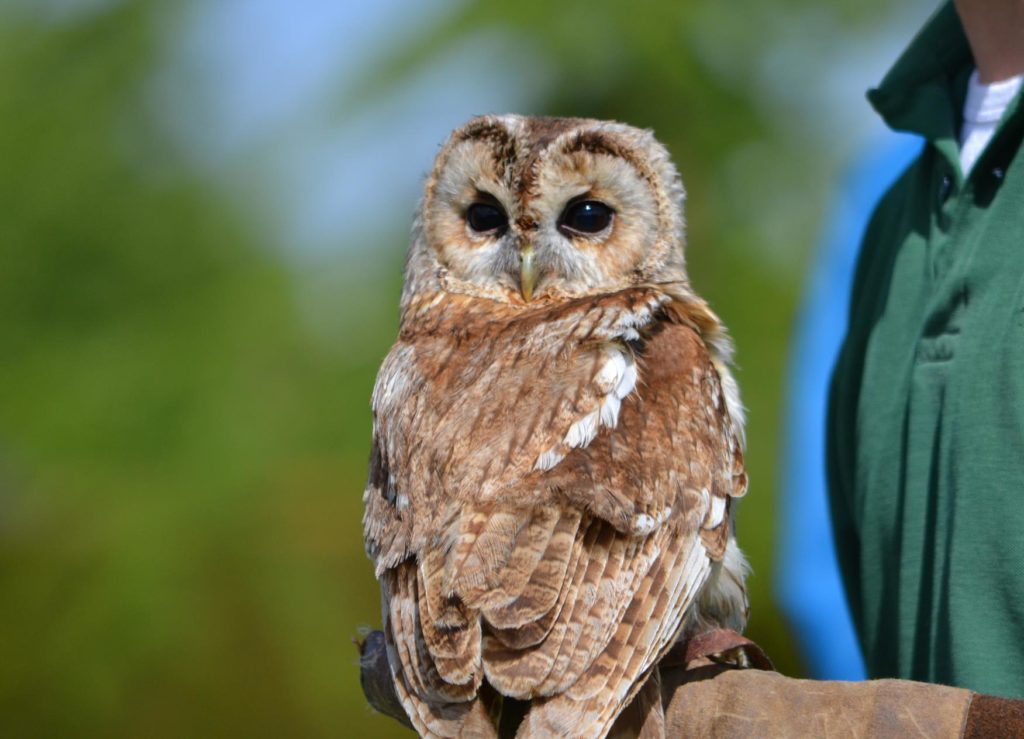 She came from a private collection in North Wales. When I first met Sage, she had only just started opening her eyes and taking in the big wide world around her. At just a few days old, she did not yet have any flight feathers, rather she had a coat of warm, fluffy down, adapted to protect her whilst being brooded by her parent in the nest – the role I would have to take on myself if our partnership was to be a success. Later I’d also become her dietitian, personal trainer and, hopefully, best friend.

The key to success with much of the training with an owl is spending as much time with the bird as is possible in the early stages. To do this, I made sure Sage came everywhere I went. She travelled with me to work each day, she came to family gatherings, we ate at the same table (thank goodness for understanding parents… my poor mum!), and she even slept at the foot of my bed. This is where she later became an expert hunter of lesser-spotted toes as they emerged from their natural duvet habitat. Ouch!

My work at the time required me to travel to a zoo in Yorkshire for weeks at a time and Sage, of course, came with me. We used to book in to a B&B not far from the zoo, operated by very lenient hosts. You can just imagine the comments from other guests at the breakfast table each morning when they’d been awoken by the soft hooting of an owl in the night miles from any woodland.

Sage has always been inquisitive and adventurous and it was here in Yorkshire that she took her surprising first steps before she could fly. One day, I left her in our equipment and food preparation room, sleeping in her basket, after a mid-morning meal. Bucket and scrubbing brush in hand I set to work cleaning the raven’s aviary (that’s a bird I’ll tell you about another time!). Ten minutes later I came back to find the basket empty – Sage had just gone. Panic stations! Sage was my baby and I’d lost her. She couldn’t have flown away, surely? She couldn’t fly yet. Moments later my radio buzzed into action – another keeper, Matt, asked me to head over to the lemur enclosure.

“Not quite the time for chat about primates!” I thought.

More than a little flustered, I headed over, feeling sure that I could at least enlist the help of my colleagues to find Sage wherever she may be. What if she’d climbed a tree and couldn’t get down? What if she’s lost in the woods behind the other birds’ aviaries? The lion enclosure is not a million miles away… focus! Steadying myself for a moment with deep breaths I opened the double doors into the walk-through enclosure. From the path I could see Matt’s head poking out of the lemur house door. Tilting his head, he beckoned me over.

“You’re never going to believe this!” He said.

As I got closer, I was sure I could hear Sage’s distinctive juvenile ‘ki-wick’ call coming from inside. I peered through the mesh of the enclosure where I’d normally be face-to-face with a lemur and instead there she was. Huge, dark eyes looking right back at mine.

“She was hopping down the path by the Bird of Prey section as I passed by – she looked quite pleased with herself!” Matt Said.

I could have hugged him. The relief I felt was like nothing else. She must have jumped out of her basket, pushed open the door, scaled the barrier and begun her little adventure in the few minutes I’d been gone. Matt had scooped her up and taken her to the safety of an empty indoor enclosure and thank goodness he did. 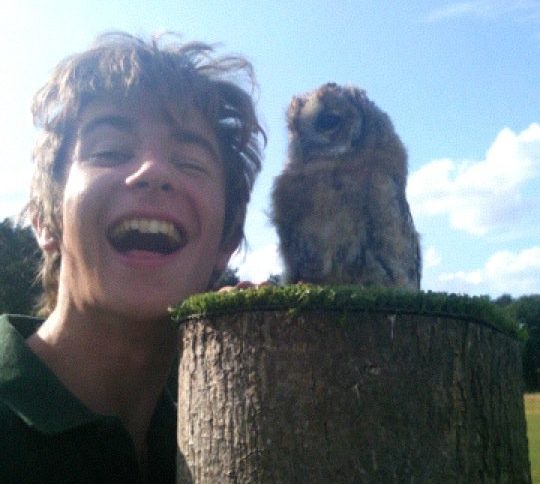 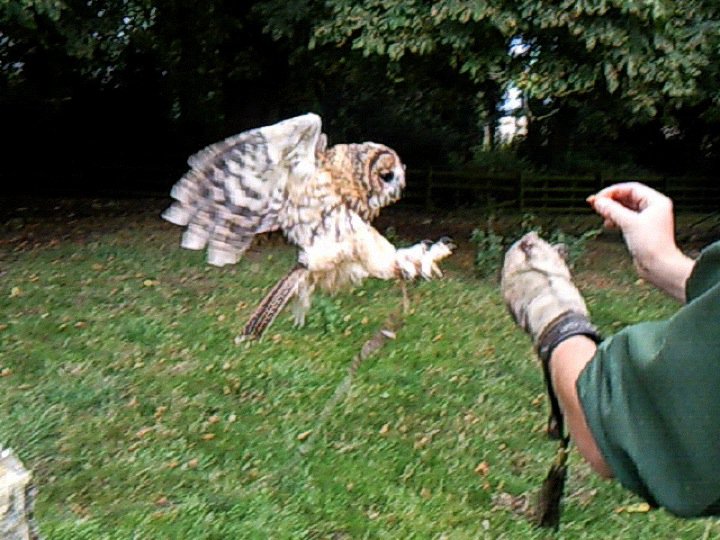 Tawny Owls are hardy, brave little birds. We know that they’re going to be the most common bird admitted to the National Bird of Prey Hospital each year – not through injury but thanks to this inquisitive nature that pushes them to explore their woodland home by branching at just a few weeks old. They often fall out of the tree to be found by a passer-by and are brought into us for rehabilitation. Cedric Robert, National Bird of Prey Hospital™ Manager really has his hands full in the late spring. Sage was clearly just showing off this natural behaviour and I hadn’t been ready for such early developments at just 4/5 weeks of age.

Sage will celebrate her eleventh birthday in May this year and in that time we’ve hardly been apart from one another, save for a week or so at a time for occasional holidays. I’ve just started bringing her back into displays again for the year and the joy I feel working with this old friend is very special indeed. Catch her in our Woodland Owls display or on one of our experiences if you can!