Each year, all aviaries are given a deep clean and refurbishment where necessary. As part of his apprenticeship, Ben Cox took on the job of working with the White-headed Vulture aviary.

“In 2016, we were tasked with the challenge of refurbishing an aviary for two of our White-headed Vultures, Angus and Satara. We were thrilled that earlier on in the year they produced their first ever chick and it’s vitally important that we keep doing our best to breed these birds. The rate at which this species is declining in the wild is so devastating that, if it carries on at the same pace, this species of vulture will actually be extinct from the wild within 20-30 years.

“It was very unlikely that Angus and Satara would breed again with their chick nearby. Therefore, we moved little Lancaster away from his parents and into an aviary with five other vultures. Here, he can learn valuable social skills and give his parents some well-needed alone time! We then moved Angus and Satara into a temporary aviary at the back of the hospital and got to work. 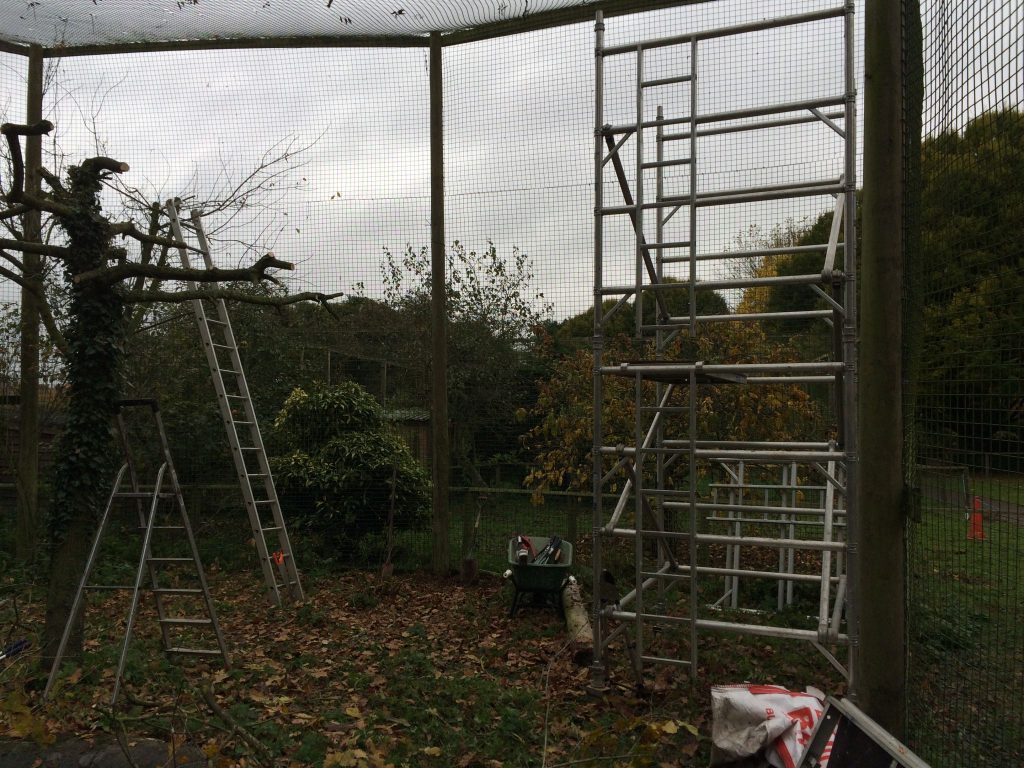 “I already had a rough plan in my head about where to start with the aviary as there were some quite obvious things that needed to be fixed and changed. One of the main poles on the side of the aviary had fallen inwards and broken the beam on the top and we’d only been able to do a temporary fix while the birds were still in it.

“We cut back a lot of the small trees and hedges that had grown to give the birds more space to fly and carefully got rid of the overgrown nettles and weeds. We then drained the pond that was in there in order to fill in the cracks which were making it leak.

“We needed to give the nest site a very thorough clean and replaced it with plenty of nesting material for the birds, such as dried clumps of grass and lots of twigs and sticks. We also needed to replace and add some more perches which we’d designed so that, when the chick fledges, they’d be just the right height from the ground.

“Something else I really wanted to do with the nest site was to get a camera set up that will hopefully reveal footage of a chick if the pair are successful again this year. It would also be helpful for us as it would alert us to any changes that the birds are experiencing.

“The project was a real success and we got everything done and more; even as far as getting a camera set up in the nest site which I’m very excited about. Now we can watch the progress of these birds and hopefully watch another beautiful chick be reared by these quite fantastic and majestic animals.

“Finally, we successfully put Angus and Satara back into their new and improved aviary. This was the icing on the cake for the project as these birds got to work straight away, testing out all the new perching. Hopefully, 2017 will see us welcome another addition to their family!”