We’ve recently welcomed two passionate interns onto our Conservation and Research team – meet Melanie Gelderd and Fern Brown! We caught up with Melanie and Fern to find out more about them, and the work they’ve been diving into on their first month at the Hawk Conservancy Trust:

END_OF_DOCUMENT_TOKEN_TO_BE_REPLACED

Updates from our National Bird of Prey Hospital™

We are extremely proud of the work we do in the National Bird of Prey Hospital™. Hospital Manager Cedric Robert, along with other dedicated staff members and volunteers, work tirelessly to ensure all the birds get the highest level of care possible, and the best chance at survival when they are released back into the wild.

So far, 2022 has been no exception, and Cedric and the team are very busy as always. May and June are particularly busy months as it is the height of the breeding season for Tawny Owls, when many chicks are hatching. Tawny Owl chicks are often brought into our hospital because they venture out of the nest when they are still very young, and may appear like they are not quite ready! This behaviour is called ‘branching’ and is a completely natural behaviour for this species, and the parents will still feed the chick. If you find a Tawny Owl chick out of the nest, it will usually be perfectly OK. However, if you are worried for any reason, or the owl looks like it might be injured or in danger, for example if it is on a busy footpath or bridleway, near a road, or where cats or dogs might be able to find it, then you can always give us a call for advice. Find out what to do if you find an injured, sick or orphaned bird of prey.

At of the time of writing (29 June 2022) we currently have 14 Tawny Owl chicks in our care. We are happy to report that they are all doing well, and many are nearly ready for release back into the wild! Two of these Tawny Owl chicks were only recently moved from the inside aviaries to the outdoor rehabilitation aviaries, where they can gain fitness and hone their flying skills before they are released. We caught up with Cedric, who gave us an insight into how this exciting step in the owl’s recovery goes ahead:

We have also admitted six Little Owl chicks in the past month. So far, Cedric has cared for a clutch of four Little Owl chicks together, and two individual chicks bought in separately. This is an increase on last year for Little Owl admissions. It is not unusual for admissions to vary between years and probably just a coincidence and stroke of luck that the people who admitted these chicks were in the right place at the right time!

The two individual chicks were both found separately, on the ground with no sign of their parents. After some time being monitored for any health conditions, Cedric made the decision to bring the two chicks together. As they are still very young, this helps to imitate the natural nest environment, where chicks would have clutch mates to share the nest with. Here Cedric is checking their condition and weight and they are making great progress. In a few weeks they will be ready to move into one of our outside aviaries to practice flying before they are released back into the wild.

It is not just owls that Cedric and the team have been caring for so far! This year so far we’ve seen seven different species come through our hospital doors. We have also had a few fleeting visits from Peregrine Falcons from around the local area, including this handsome juvenile. Brought in to us disorientated, it was checked over by our vet and found to be in good health. After a rest, it was alert and ready to be returned to its family within 24 hours. This is a fantastic result, as unlike some birds of prey, Peregrine Falcons need that time with their parents when fledging to learn from them how to hunt effectively. 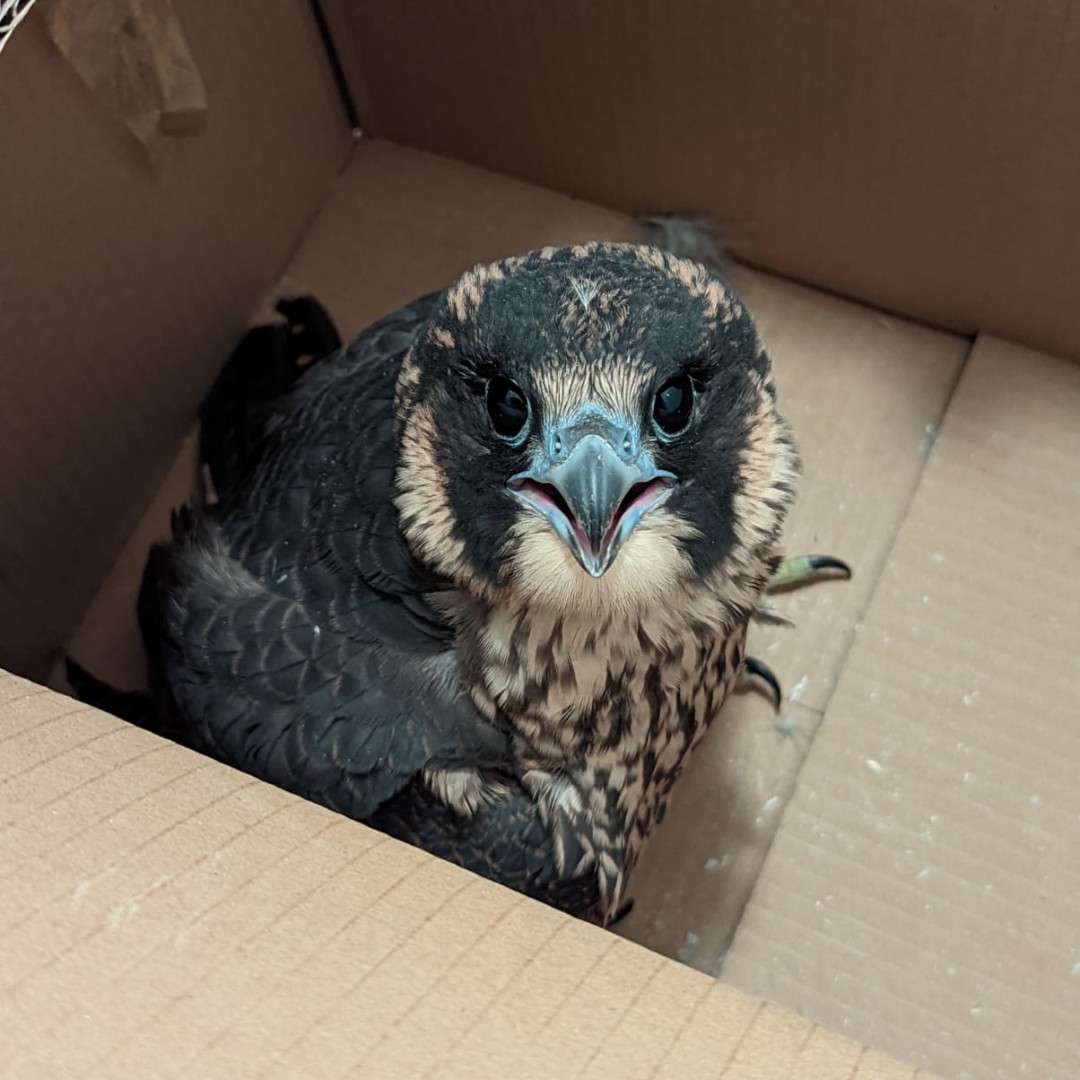 However busy it gets in the hospital, the work feels wonderfully worthwhile. The National Bird of Prey Hospital™ can treat up to 200 sick, injured or orphaned wild birds of prey a year. You can find out more about the fantastic work that goes on in the hospital here.

Checking in with Pike

During the summer season, our daily timetable changes and our summer flying displays begin. This means the stars of our winter displays get a well-deserved rest during this time.

Pike the Black Vulture and his girlfriend Chips are fan favourites in our winter display – World of Birds of Prey. Pike in particular is known to get a little distracted during show time, and will often wander into the crowd exploring the audiences’ shoes! 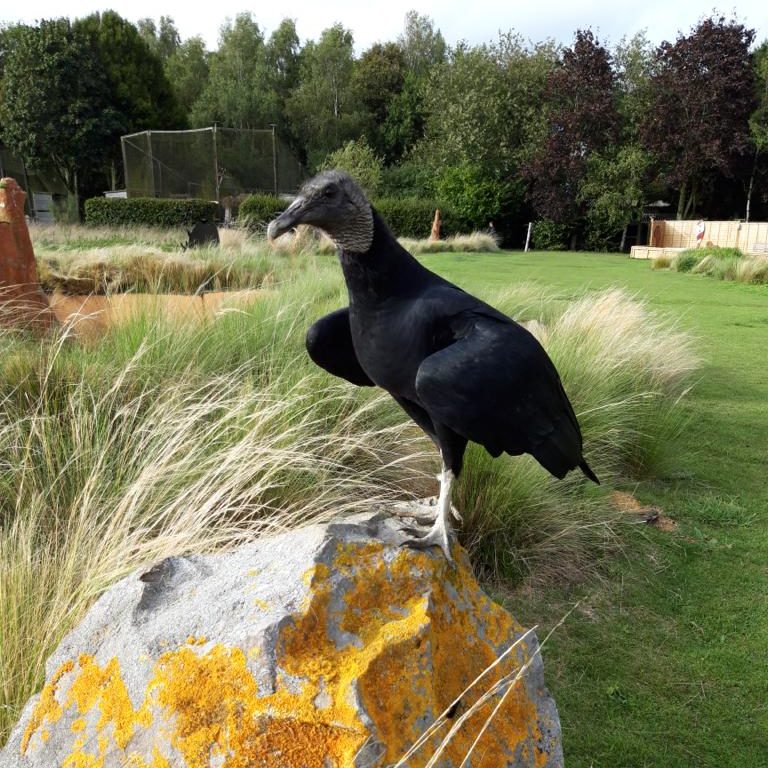 Other than that, Pike and Chips are pretty inseparable. They have been together throughout their entire lives. As you may have guessed, Pike is the more mischievous of the two; one of his favourite things to do when a Bird Team member is cleaning his aviary is to give them a swift peck on the bag of the legs before scurrying away!

During the summer months, Pike likes to kick back and relax. He enjoys the life of luxury, attended to by the Bird Team with lots of tasty food. The peace and quiet from this time period means he can moult through a brand-new set of feathers, ready to wow the crowds when he begins to fly again in the autumn.

Black Vultures are New World Vultures, and can be found natively across the Americas, and are colloquially known as ‘Buzzards’! They can be found in quite large flocks, and offspring stay with their parents in a social group into adulthood.

To keep themselves cool and clean in the hot summers, Black Vultures urinate over their own legs! This peculiar behaviour is known as urohydrosis.

On your next visit, be sure to say hello to Pike and Chips in their aviary. During hazy summer days, they can be seen cosying up together and drifting off to sleep on their perch.

Flight at the Movies: The highlight reels!

On Saturday June 25, we held our biggest fundraising event of the year. More than 500 guests enjoyed a spectacular evening of birds flying to iconic movie soundtracks, performed live by the English Wild Orchestra and singer Ayesha Pike.

Guided by the evening’s commentators, Bird Team members Tom Morath and Ben Cox, our guests were transported into scenes from iconic movies. The evening kicked off on a high, with our Barn Owls quartering Reg’s Wildflower Meadow to the magical Harry Potter theme tune. Enthusiastic as ever, Ben may have gotten a little bit too into character here! 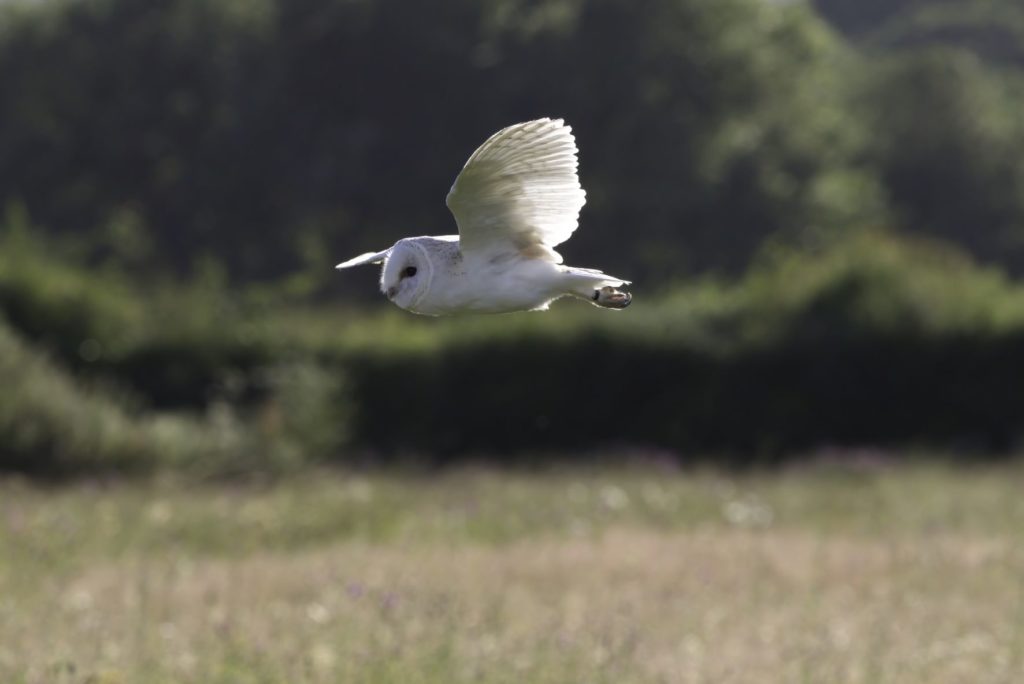 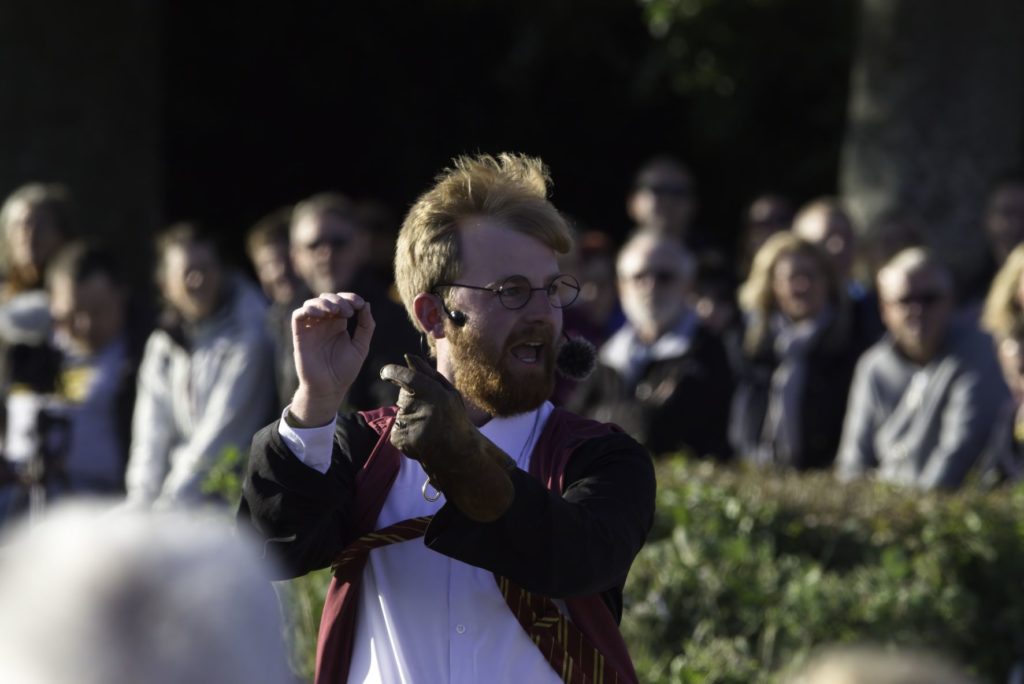 The audience were then pulled right into the centre of the action, as our Lanner Falcon –  Chaucer sped through the crowd at speeds of up to 60MPH to the Pirates of the Caribbean soundtrack, and a few lucky guests were selected at random to fly Fagan the Hooded Vulture to ‘You’ve got a friend in me’ 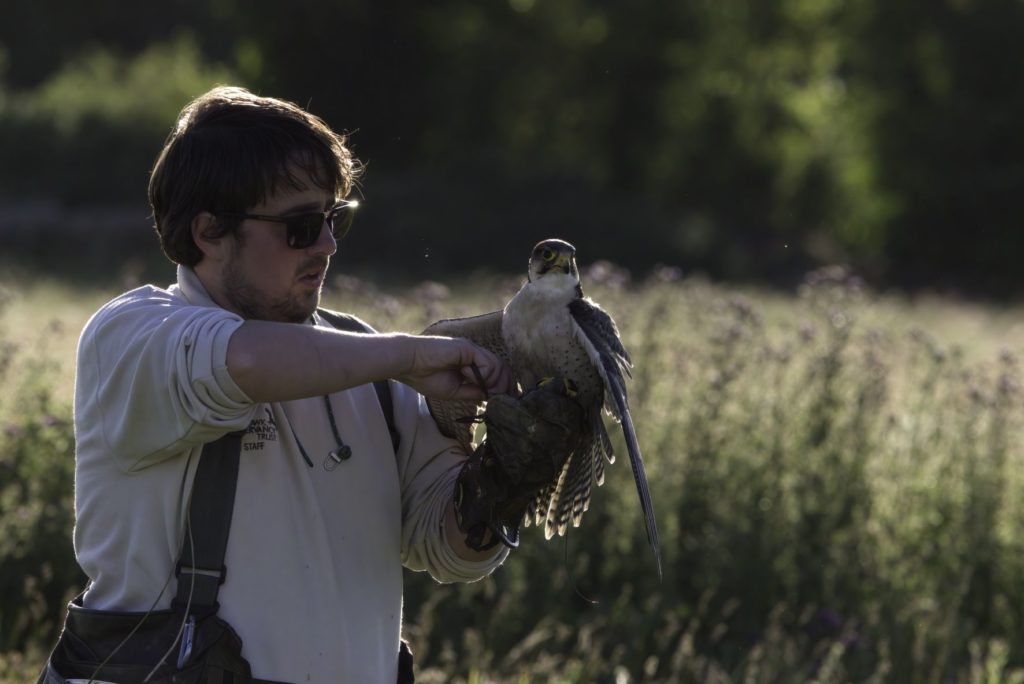 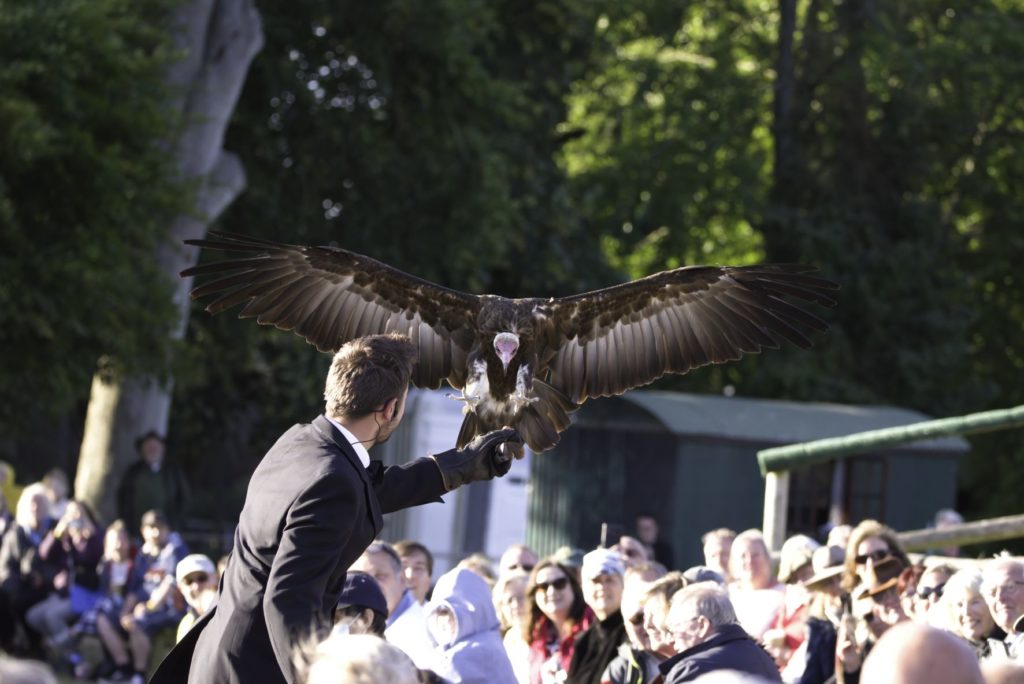 The sound of fearsome roars filled the air as the audience were then taken into the Trust’s very own Jurrasic Park, complete with ‘raptor wrangler’ Ben! Instead of dinosaurs however, our White-backed Vultures soared across the meadow, showing off their impressive wingspan in some breath-taking circuits. 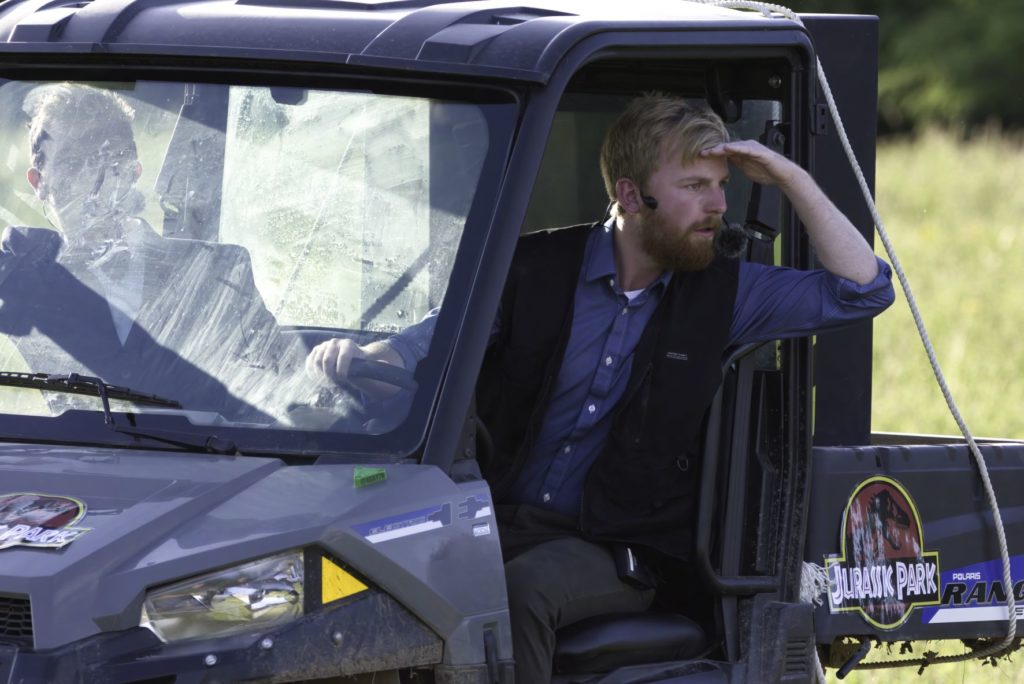 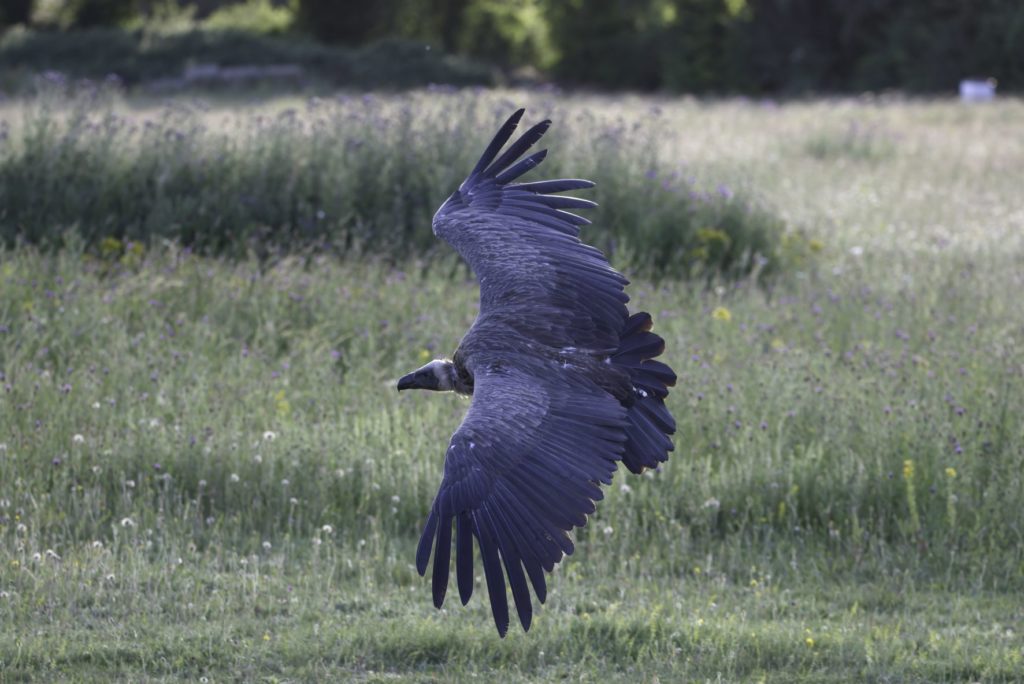 The first half of the evening concluded with a special treat. Newcomer to the Trust, Sam the Bald Eagle flew over the guests, accompanied by a soundtrack as impressive as his flight: Star Wars! After a short interval, the second act started with the Bird Team presenting Sirius the Striated Caracara with his very own Mission Impossbile – to uncover tasty treats hidden within movie style props (silver flower pots!). 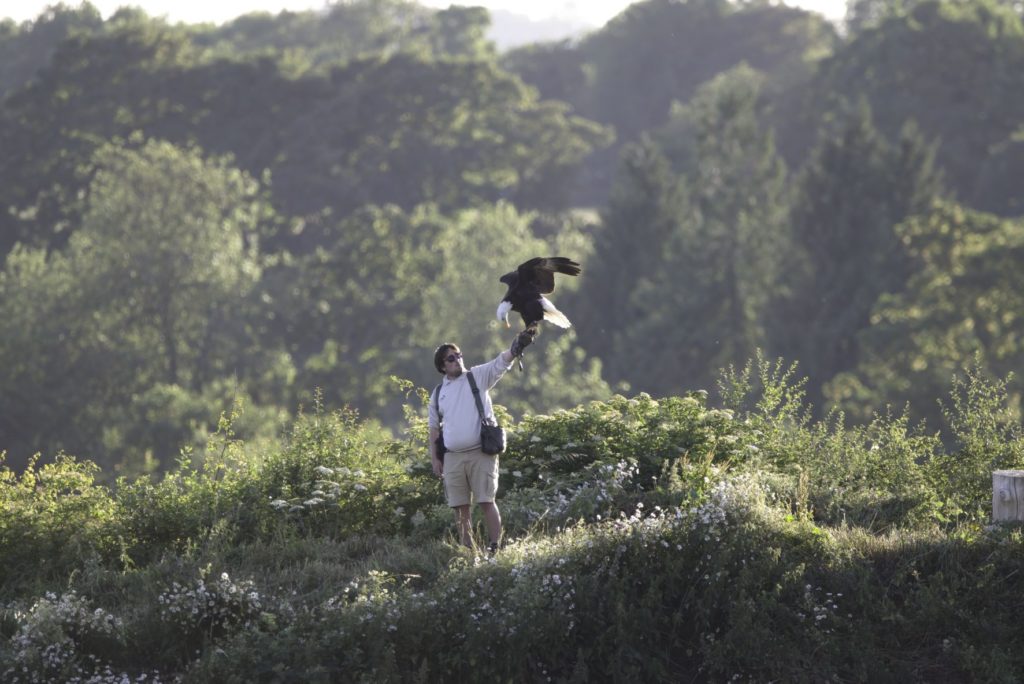 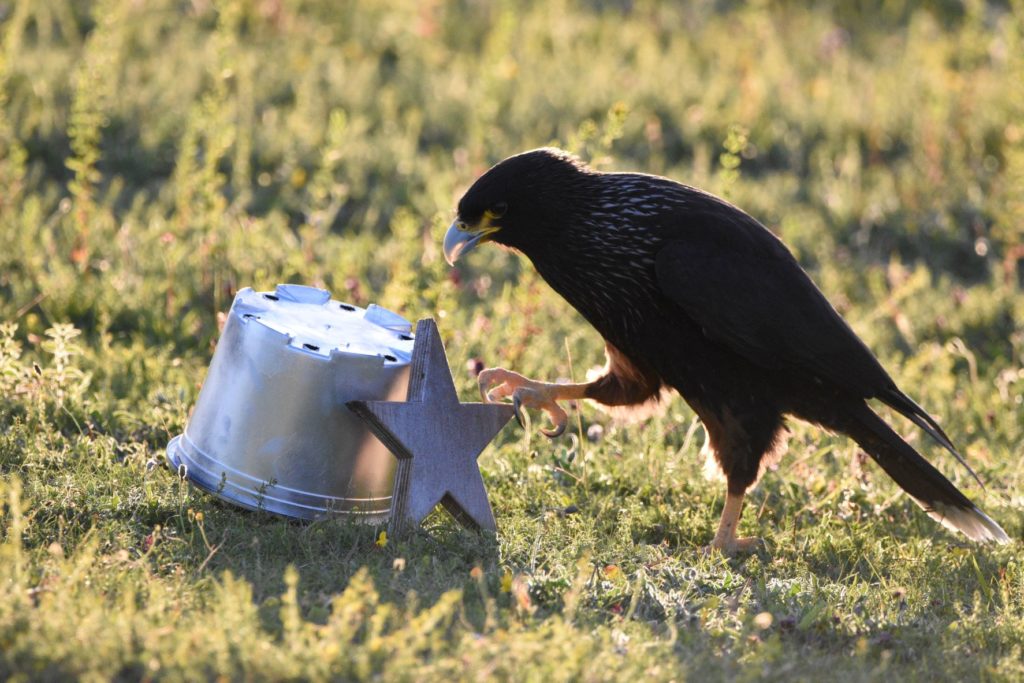 Our birds then took to the skies one final time in a awe-inspiring recreation of the opening scenes from the Lion King. Our Storks (all five of them for the first time ever!), Black Kites and Hooded Vultures filled the sunset sky and circled our beautiful elephant puppet, all to the stunning rendition of the Circle of Life. A really touching end to a beautiful evening of bird flight and song. 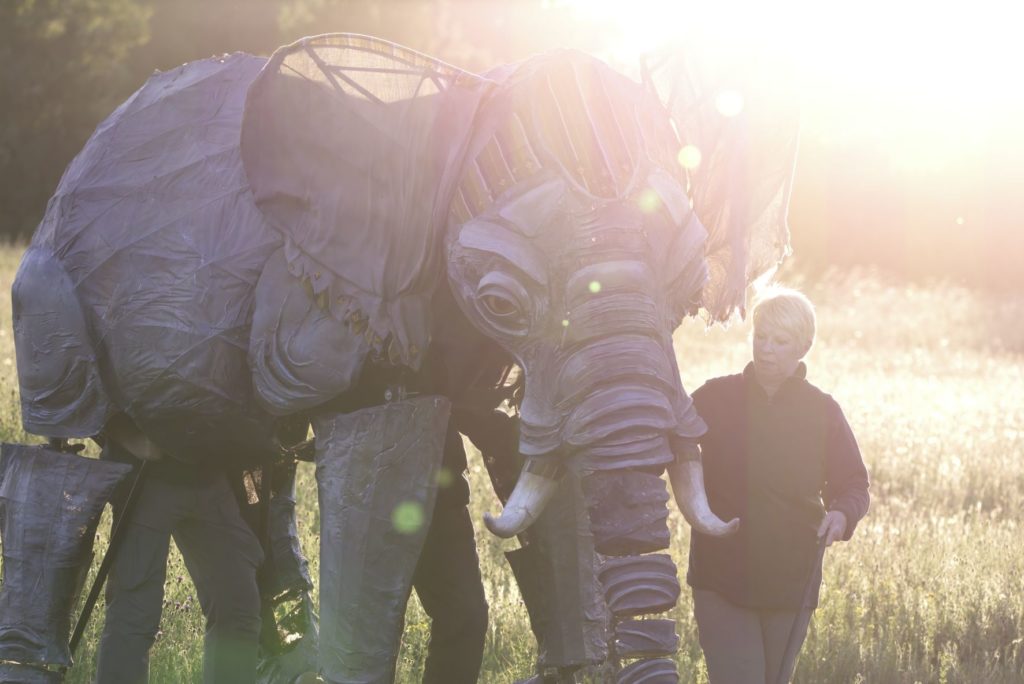 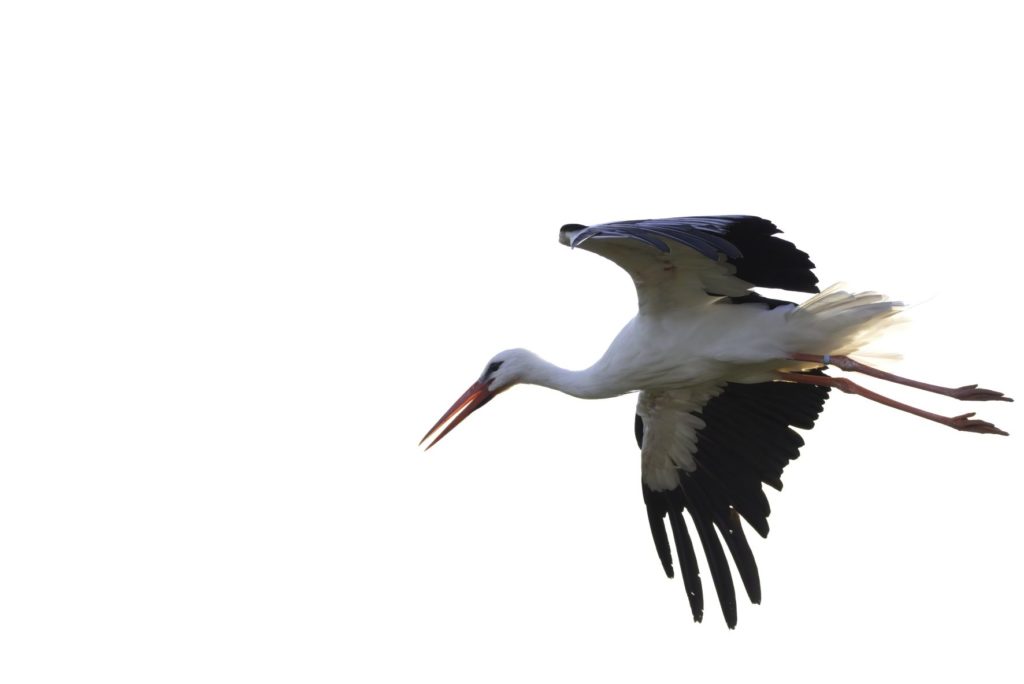 Finally, our grand finale arrived. The audience turned their attention to the skies directly above them as the one and only Red Devils circled overhead, climbing higher and higher into the sky. Once they reached 5000ft, the moment came for the parachuters to jump from the plane, twisting and turning in flight before safely landing to a rapturous round of applause. 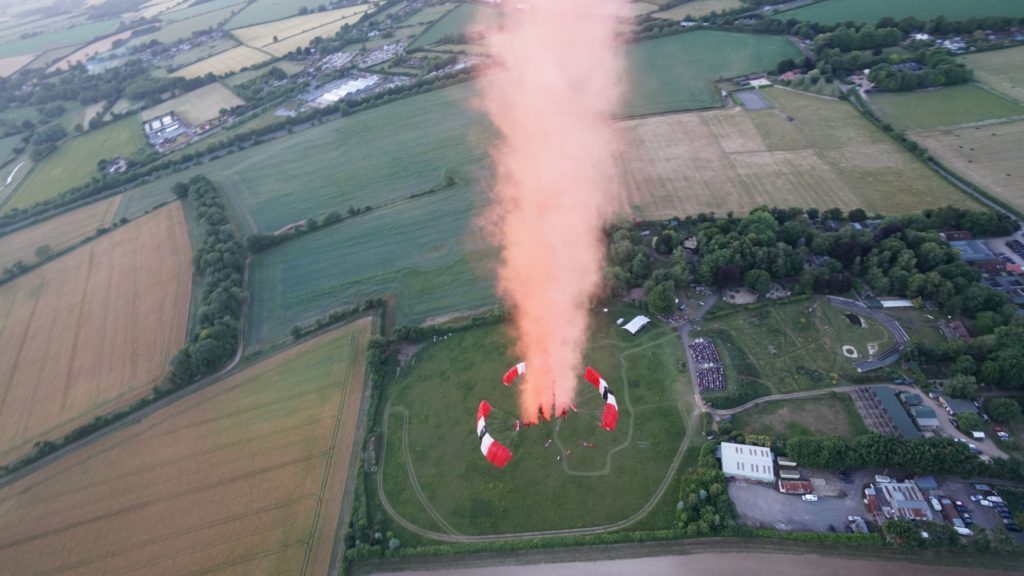 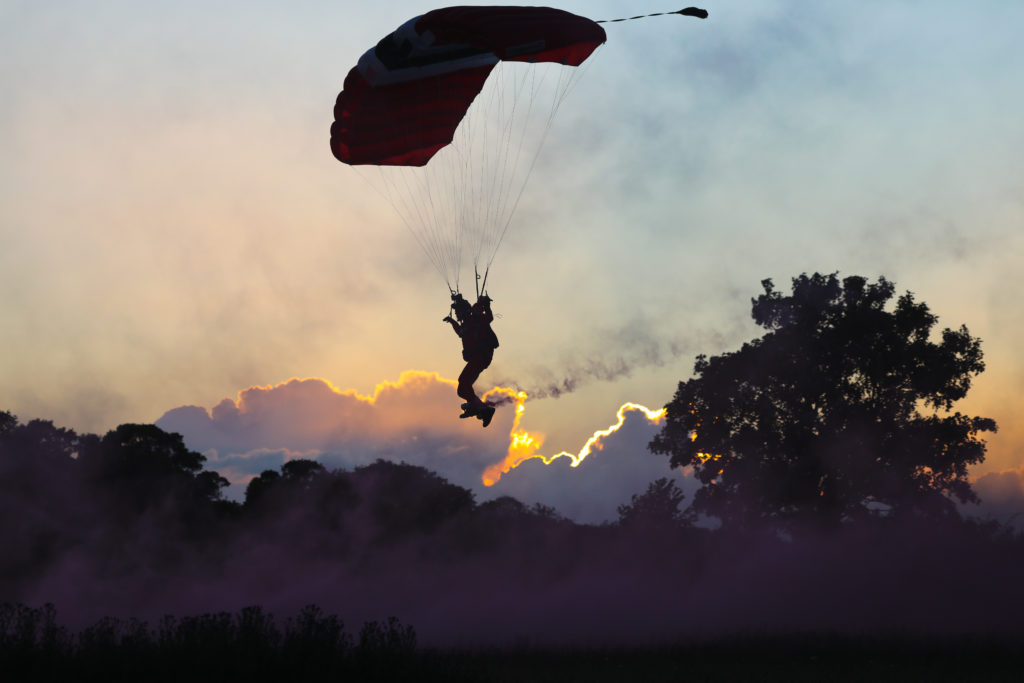 A huge well done to all involved in this fantastic event, and to our wonderful audience. All money raised from this event goes directly towards our mission – the conservation of birds of prey.

Find out more about our upcoming events here.