The seven acres of wildflower meadow was created in 1995 and named in memory of the Trust’s founder, Reg Smith. Reg’s Meadow is a habitat of amazing diversity and this habitat is listed in the National Biodiversity Action Plan as one of 65 that are a priority for conservation. In this edition of HawkTalk, we want to celebrate some of the amazing species of flora and fauna that can be found in our meadow. When we acquired the piece of former agricultural land, we sowed it with two pillowcase sized bags of seed, containing 19 species of wildflowers and seven species of grasses. In the 25 years since its beginning, we’ve recorded a stunning 732 different species of flora and fauna in the meadow, and below are some of our absolute favourites although of course it is the rich diversity of species that really make Reg’s Wildflower Meadow so special.

The species that found each year depends on the weather over the previous winter and spring. Some things, both plants and invertebrates, appear every year without fail, while others disappear only to re-appear in a later year. This change in occurrence is particularly true of the invertebrates, especially butterflies and other insects. Monitoring activities are undertaken by dedicated volunteers, Monica Johnson and Brigid Campbell, who have an intimate knowledge of the species found there. 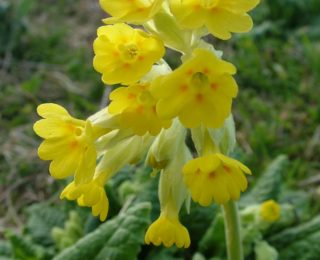 A native plant, flowers April to May. Once a common plant of traditional hay meadows, ancient woodland and hedgerows, but has seriously declined due to the loss of these habitats. Wonderful displays such as the ones in our meadow are now a rare sight. Important for wildlife as the flowers are an early source of nectar for insects such as bees, beetles and butterflies. 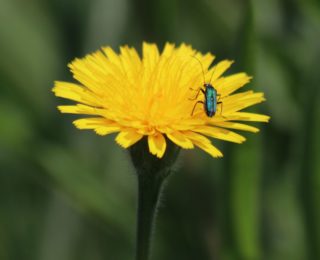 Widespread and fairly frequent in the UK except the far north, growing on well-drained chalky soil and also on railway embankments and other grassy habitats. A member of the Daisy family, with Dandelion-like flowers but distinguishable from Dandelions by having a very hairy stem and leaves. Flowering from June to September, it is a very good flower for attracting pollinating insects. In our meadow it appears in large numbers from mid-summer into autumn and covers much of the meadow with yellow flowers. 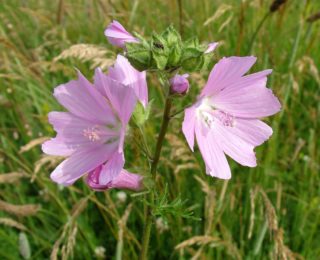 Musk Mallow has pretty, pale pink flowers, hairy stems and deeply-cut feathery leaves. It has a musky scent, from which it gets its name. It is native to southern England and probably an introduced species in northern Britain and Ireland. It is found in dry places in hedgerows, roadside verges, pastures and the edges of fields and flowers from June to September. For a few years we found only a single plant each year in one spot but it has gradually spread to other areas of the meadow and increased in numbers. Musk mallow was once used as an ingredient in soothing cough syrups and ointments and thought to be one of our oldest medicines. 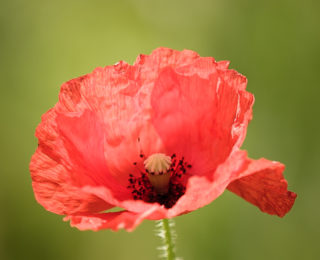 Common throughout England and lowland parts of Wales and Scotland but declining in numbers due to modern intensive agricultural practices. It flowers between June and September on farmland, field edges, roadsides and waste ground. Its seeds can lay dormant in soil for years, until the soil is disturbed, which is why poppies appeared on many battlefields where soil disturbance occurred, thus becoming the symbol of remembrance. In the Language of Flowers it stands for Condolence. The Egyptians and Romans associated Poppies with new life and made garlands with the flowers to celebrate the gods and ensure crop fertility. 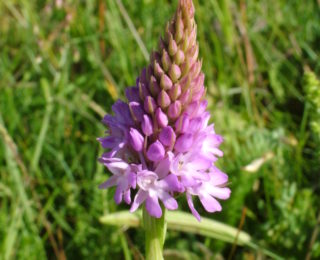 One of the most exciting plants, which we are always pleased to find in the meadow. Traditionally it grows on old chalk grassland but is now also found on coastal habitats, scrub, roadside verges, old quarries and railway embankments. It flowers in June and July and attracts a range of butterflies and moths, which are important for its pollination. In earlier years only a few appeared in the meadow, but in 2019 we counted over 40 individual plants. This year once again we could find only a few. The variation probably has to do with the climate in the previous winter and early spring. 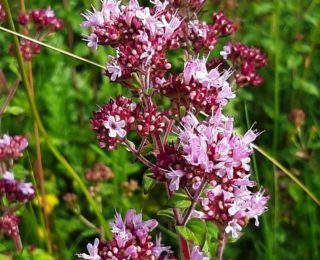 Grows on chalk and limestone soil in grasslands, hedge banks, scrub and road verges and flowers from June to September. It is found throughout the UK, particularly in the south, but is scarcer in Scotland. It is the same species as the Mediterranean culinary herb Oregano, but has a slightly different scent when growing in the cooler climate of the UK. It is an excellent food source for many pollinating insects. 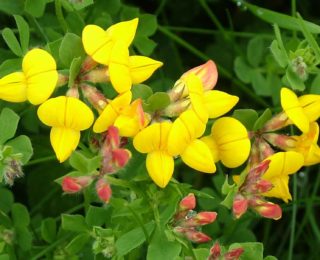 Flowers from May to September, this is the food plant for several caterpillar species, including those of the Common Blue Butterfly for which it is the main food plant. 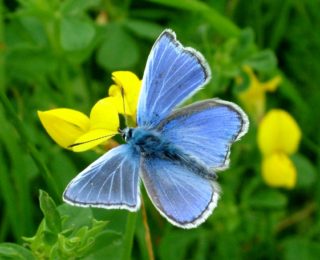 Flies between May and October. The upper wings of males are bright blue, while those of the females are predominantly brown. Despite its small size, the male is one of the most recognisable species in the meadow, with a splash of bright blue as it flies by. 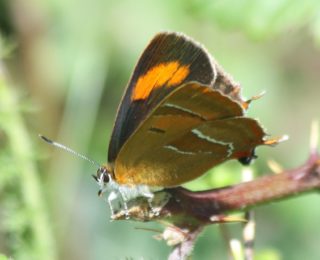 One of Britain’s rarest and most elusive butterflies. It has declined rapidly in recent decades, due to the loss and over-frequent cutting of hedges and is now listed as a top conservation priority. We first recorded it in the meadow in 2017 and it has appeared again in subsequent years, suggesting that it has bred here. It lays its tiny white eggs on the young growth of Blackthorn. UK BAP status: Priority Species. 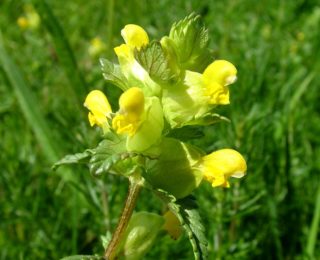 An annual that thrives in grasslands, a semi-parasitic plant that inhibits the strength and growth of nearby grasses, allowing less robust plant species to flourish. After many years, this species appeared in one spot and has since spread to several areas in the meadow. Its effects can be clearly seen where the grasses are thinner. The specific part of its name is derived from the rattling sound that the seed pods make when dry. 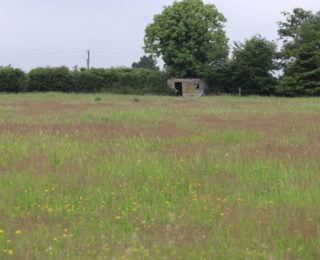 Found particularly in dry, chalky soil and flowering in June and July. It is the prettiest of the grasses in our meadow and has delicate slender stems, branched with flowering spikelets that shake and shimmer in the wind, giving the plant its common name. It varies in quantity from year to year, with 2018 being an especially good year, when swathes of reddish purple appeared right across the centre of the meadow. 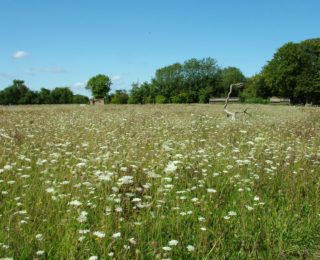 The wild form of the cultivated carrot, this species often takes over the whole meadow in early autumn, covering it with a spectacular mass of white flower heads. Its flowers are nectar and pollen rich and attract a wide range of insects, including bees, beetles and hoverflies. It provides seeds for birds and is a caterpillar food plant. After flowering the seed heads bend inward, forming a shape similar to a bird’s nest, often used by insects such as ladybirds and earwigs for shelter. These seed head cups remain all through the winter. 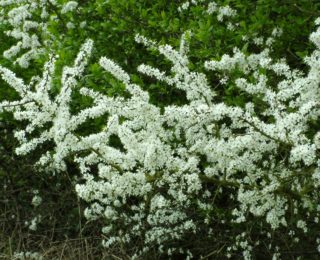 Produces a spectacular froth of white flowers from March to May. It is the foodplant for Brown Hairstreak (as well as other butterflies such as Black Hairstreak). 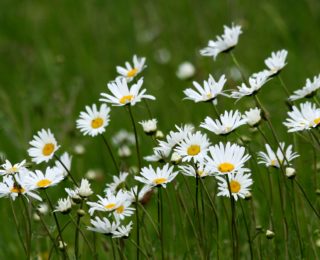 We used to have large patches of Ox-eye Daisy but there are far fewer these days and mostly situated close to the hedges where they are less noticeable to visitors. 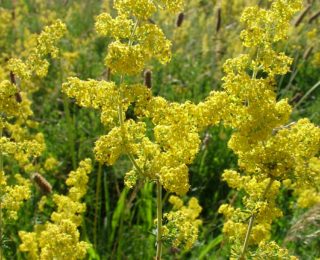 This flourishes every year, flowering from June to September and filling the meadow with a sweet honey-like scent in high summer. 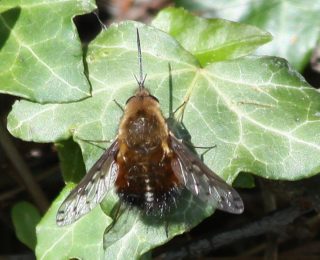 This one is a real treasure. It looks like a small bee but has a long, sharp pointed proboscis with which it drinks nectar. We have had the more common Dark-edged Bee Fly (Bombylius major) in the meadow for many years but the rarer Dotted Bee Fly was first seen in 2012, and has been found every year since then, appearing in greater numbers each spring. It is listed as a UK BAP Priority Species and classified as Nationally Scarce. It flies from March till May. 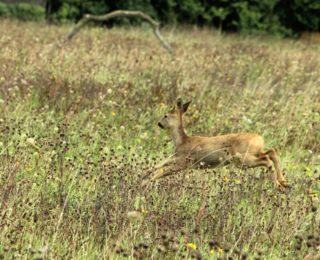 Usually associated with woodland and forest edges, they also use agricultural fields, copses, scrub and hedgerows. They are increasingly being spotted closer to urban areas as they take advantage of these habitats. They are frequent visitors to our meadow but very shy. You usually don’t know they are there till they spring up suddenly from the long grass and make a run for it. Their droppings in the meadow can be identified by their pointed end, while rabbit droppings are round. 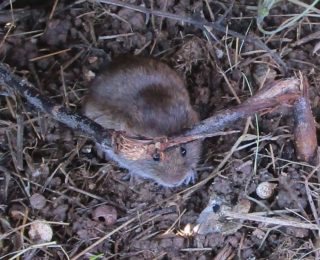 Living in rough grass, they make domed nests and tunnels in the grass. They are prey for a wide variety of animals, including owls, kestrels and other larger mammals. Small mammal boxes are situated at various points around the meadow to give shelter to these and other tiny mammals, especially in winter.

Since we started monitoring moths at the Trust, we’ve discovered over 350 species! The most spectacular moths regularly caught in our moth traps are Elephant Hawk Moth (Deilephila elpenor) and Poplar Hawk Moth (Laothoe populi). Both fly at dusk and during the night. We have caught many other very pretty moths but these two stand out. There are also moths that fly in the daytime, including Five-spot Burnet (Zygaena filipendulae), bright red as it flies past. We used to have many of these every summer but in the last two or three years there have been very few. Another regular daytime moth is Silver Y (Autographa gramma), a migrant visitor from the continent that arrives in large numbers each year. 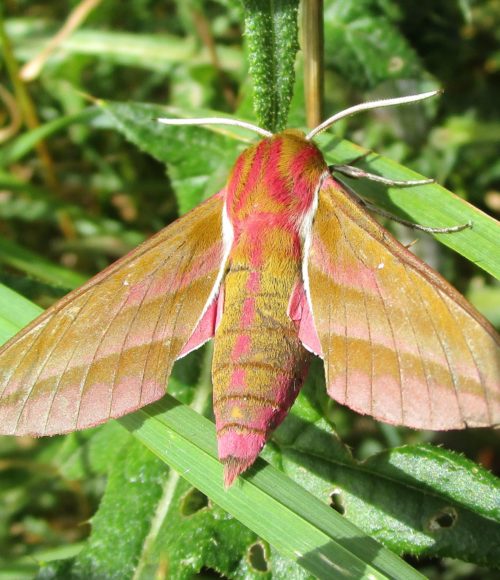 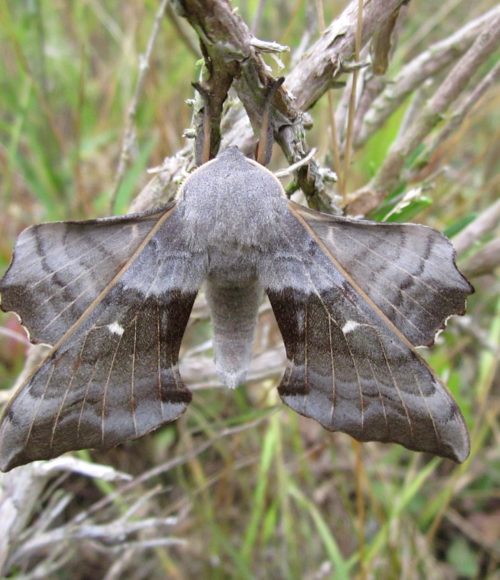 The meadow in the spring and summer is full of bees – Honey Bees (Apis melifera) from our hives, some mining bees and many bumblebees. We’ve had both Tawny and Ashy Mining Bees in the meadow for years – the Ashy are often found in the path on the left hand side, where their little holes can be seen. They also nest in among the grass. The commonest bumblebee we see is Red-tailed (Bombus lapidarius) and we also have good numbers of Buff-tailed (Bombus lucorum). 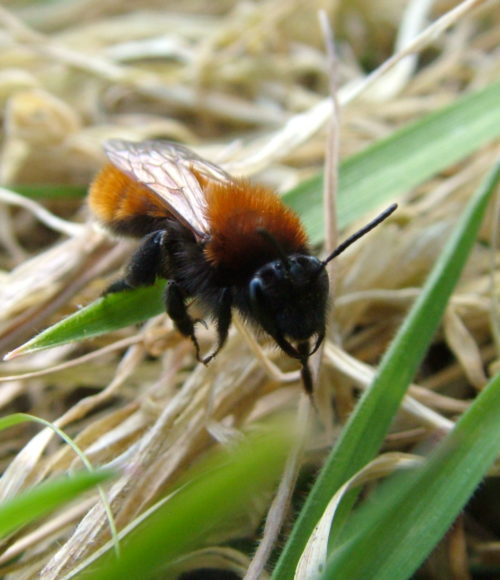 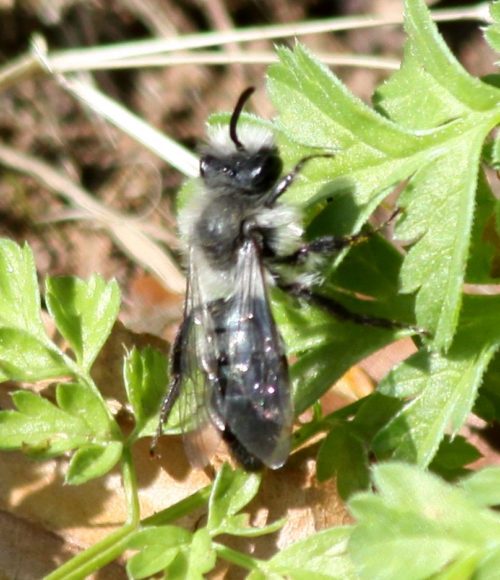 Did you know?
Golden Eagles are more closely related to hawks (like the Red-tailed Hawk) than to Bald Eagles. Bald Eagles are more closely related to kites.
©2023 Hawk Conservancy Trust
Cookies
We use cookies on our website to give you the most relevant experience by remembering your preferences and repeat visits. By clicking “Accept”, you consent to the use of ALL the cookies. However you may visit Cookie Settings to provide a controlled consent.
Cookie settingsAccept
Manage consent