Back in September our Head of Development, Andy Hinton, and Bird Team member, Ben Cox, headed out to South Africa for our annual conservation field trip to Dronfield Nature Reserve, near Kimberley in the Northern Cape. They also spent some time in Mokala National Park and were lucky enough to take a trip to the Kalahari Desert in northern South Africa. This trip is bittersweet for those who attend.  They get to see some of the most awe-inspiring landscapes and wildlife within and see some of the birds we are working hard to conserve in their wild habitats, however, they are reminded of the vulnerability of these birds and see the threats they face right before their eyes.

Dronfield Nature Reserve is home to an important breeding population of African White-backed Vultures, and each year members of our team visit to help with ringing the chicks from this colony. African White-backed Vultures are Critically Endangered; the species is at risk of extinction and has a wide variety of threats, the most significant being intentional poisoning. Monitoring populations of these birds is extremely important, so we can better understand their breeding behaviour and mortality rates, in order to develop ways to conserve them. The Trust has been involved with the long-term monitoring of this important breeding population of vultures for 20 years. 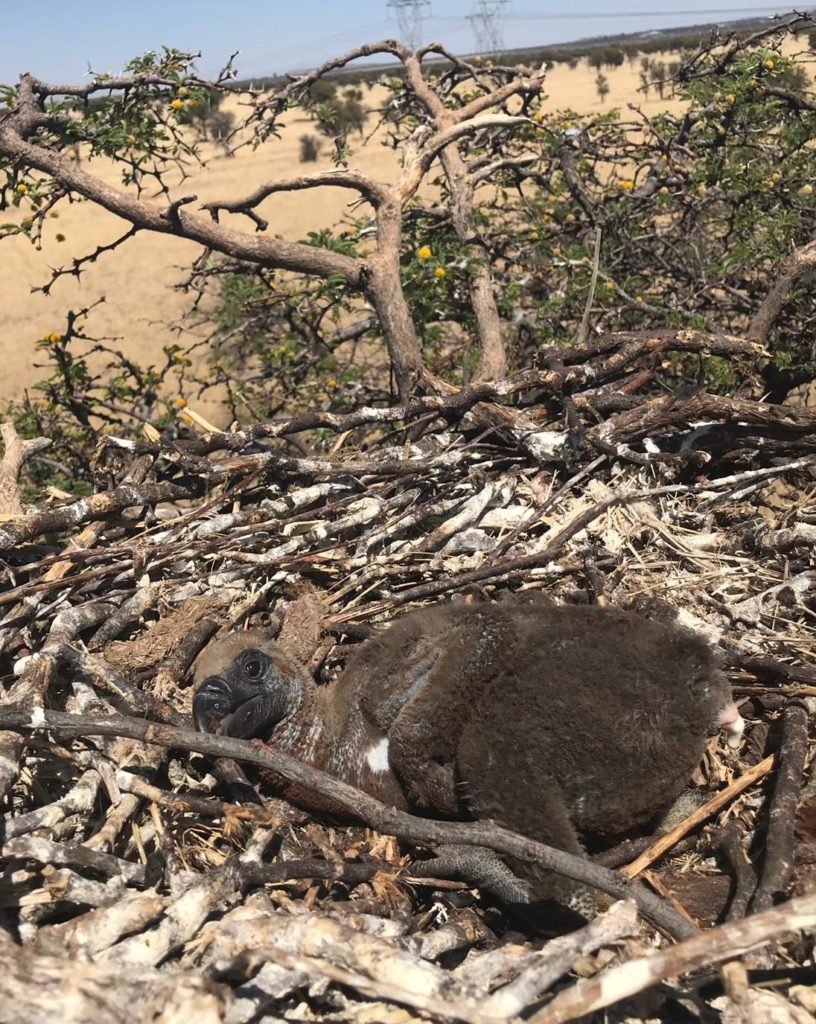 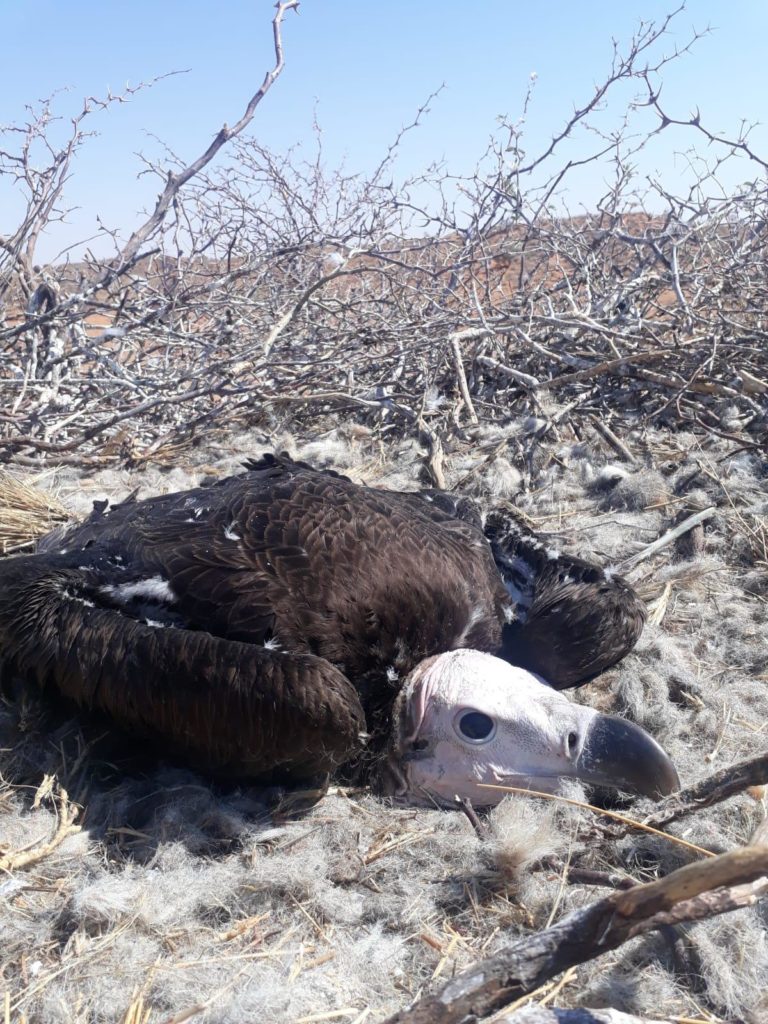 “I have been part of a team from the Trust that has helped monitor this vulture population near Kimberley for over 15 years. Over 100 people from dozens of collections across Europe and further afield have also helped out. It’s a privilege to get to know this colony and to watch how the vultures interact with each other, plus of course seeing vulture chicks every year is very special! We are extremely proud of our contribution to the project. Keeping track of this population is so important, so we can make sure we effectively conserve them.” ~Andy Hinton.

Across the three sites in Dronfield, Mokala and the Kalahari Andy, Ben and the rest of the team ringed and processed an impressive 174 birds, which, as well as the 169 White-backed Vultures, also included a Verreaux’s Eagle-owl, three Greater Kestrels and a Lappet-faced Vulture!

How do you ring a vulture?

White-backed Vultures nest in thorn trees in Southern Africa, such as the Camelthorn (Vachellia erioloba) shown in the photo with Ben, which has distinctive yellow flowers. This requires climbing the tree with a ladder, and gently lowering the vulture chick. We use a sturdy plastic basket to put the vulture chicks in for safe lowering; this method prevents snagging of loose material on thorns and of course protects the vulture from injury on the way down. As the vulture is processed a towel is placed over its head to keep it calm, the team are also careful to work as quickly as possible..

A metal ring is fitted to the bird’s leg, and blood samples are taken to test for parasites and environmental toxins such as lead. Unfortunately, lead is a threat to vultures in some areas of southern Africa, through consumption of hunted or poached carcasses that have been shot with lead cartridges.

The blood sample is also DNA tested to decipher the bird’s sex, which allows us to understand the female to male ratio of the vulture colonies. Measurements and weight are taken for each bird, to understand the health and growth of the birds in the population. The vulture is then placed back in the basket and safely lifted back up into the tree and returned to its nest.

Release of a rehabilitated bird

Whilst they were there, Andy and Ben were lucky enough to be involved in the release of a rehabilitated Cape Vulture. The bird was discovered on the ground at a farm in the Karoo, around 120km south of Kimberley. It was housed in a rehabilitation aviary on the farm to recover, and three weeks later it was ready to be released back into the wild! It was fitted with a GPS transmitter so its movements after release could be documented. It moved much further than expected following its release, indicating that it is on the road to recovery.

“Having the opportunity to see vultures in their natural environment was amazing, but watching a rehabilitated Cape Vulture fly away as I released it was absolutely sensational!”~Ben Cox 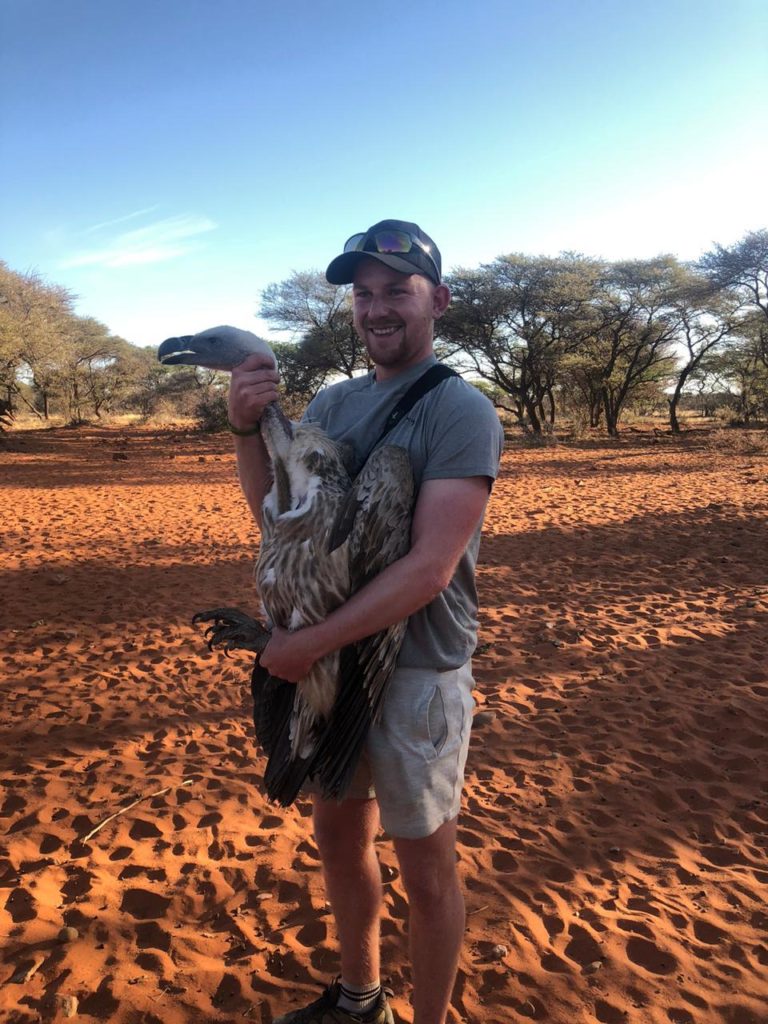