Every year, our team go to Dronfield Nature Reserve, near Kimberley in the Northern Cape, South Africa to take part in the annual week of fieldwork ringing and tagging African White-backed Vulture chicks. This year we sent our Africa Project Officer, André Botha, along with Angus Anthony, former manager of Dronfield Nature Reserve, who we have been working with for a number of years. Here is André’s fascinating account of his trip:

“Dronfield Nature Reserve is located in the Kalahari biome of southern Africa and is characterized by open savanna dominated by flat-crowned camelthorn trees that present ideal nesting platforms for the Critically Endangered African White-backed Vulture and forms one of the southernmost breeding clusters for this species within its range. Monitoring of this population started in the early 1970’s by Professor Peter Mundy who recruited the then manager of the property, Angus Anthony, to become involved with this activity under the auspices of the Endangered Wildlife Trust’s Vulture Study Group in 1973.

I have been fortunate to visit Dronfield many times so the opportunity to visit this special area again and meet up with some old friends, whilst working with vultures, was just too good an opportunity to miss. It made the almost six-hour journey from Johannesburg go by in no time! It was great to catch up with Angus on arrival, and we agreed to drive to the vulture feeding site early the next morning in the hope of seeing and possibly tagging some vultures for tracking purposes before the rest of the local team arrived to start with the ringing and tagging of African White-backed Vulture chicks. 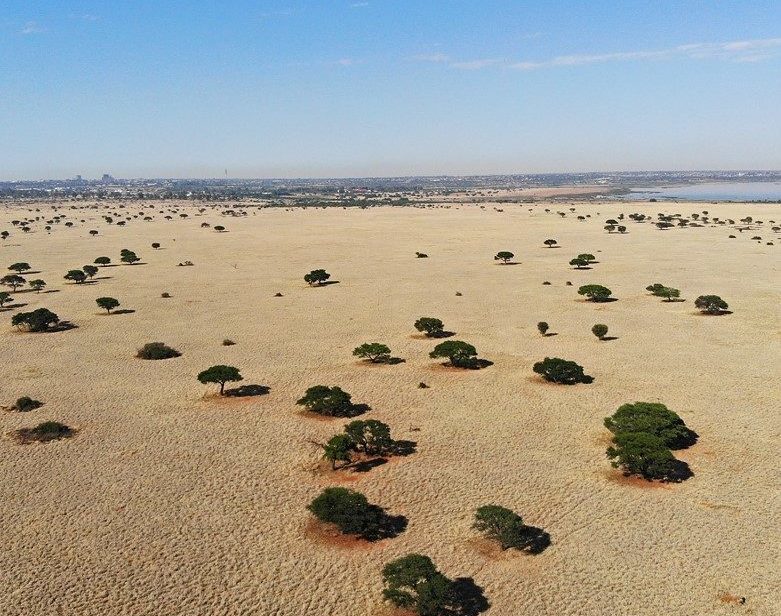 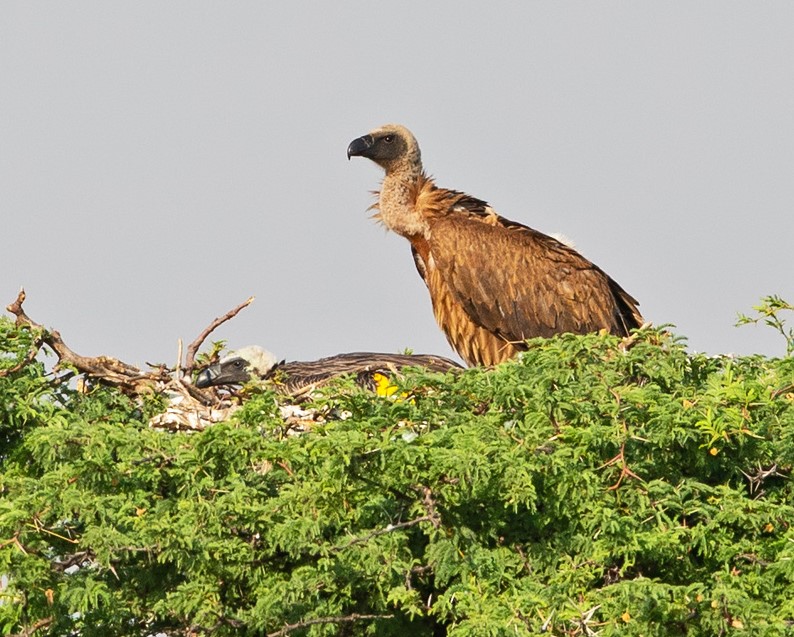 Dronfield Nature Reserve from the air, and an African White-backed Vulture with its chick in the nest

Angus and I had some time to catch up on the goings-on at Dronfield and to reflect on his 34-year involvement at this site. His energy for and dedication to the task remains admirable and was illustrated repeatedly over the next four days of fieldwork. We met up with the rest of the team back at base camp, where we split into two teams, one led by Angus, the other by Beryl Wilson from the McGregor Museum.

On arrival at a tree with a nest, a ladder is erected to enable the climber, in most instances Angus, to access the nest from below. Once he has confirmed that there is a chick of suitable age in the nest, a basket is hoisted up to him and he gently coaxes the chick into the bag after which it is lowered by rope down to the ground to the waiting team who process the chick. First, the chick is weighed, then fitted with a metal ring on its leg. Its wing measurement is taken and then an individually numbered set of tags is fitted to each of the wings. These tags enable identification of individual birds for the first 4-5 years after they leave the nest and have revealed interesting movements by fledglings from this area over the last 15 years. Dronfield fledglings, after leaving their natal area, have been recorded from the Kruger National Park, Namibia, Botswana and even Zambia after leaving the nest!

We also collect a blood sample from each chick for use by Linda van den Heever from BirdLife South Africa, who is conducting a study at various sites in South Africa to assess the extent and impact of lead poisoning on these birds. A single drop of blood is also sent for analysis to determine the chick’s sex. Feathers found on the ground around the nest are collected for further genetic analysis. The chick is then carefully placed back in the basket, hoisted back up the tree, and returned to the nest. Then the height of the nest and circumference of the nesting tree is measured before all equipment is cleaned and packed away, the team’s hands are sanitised and we head to the next nest. 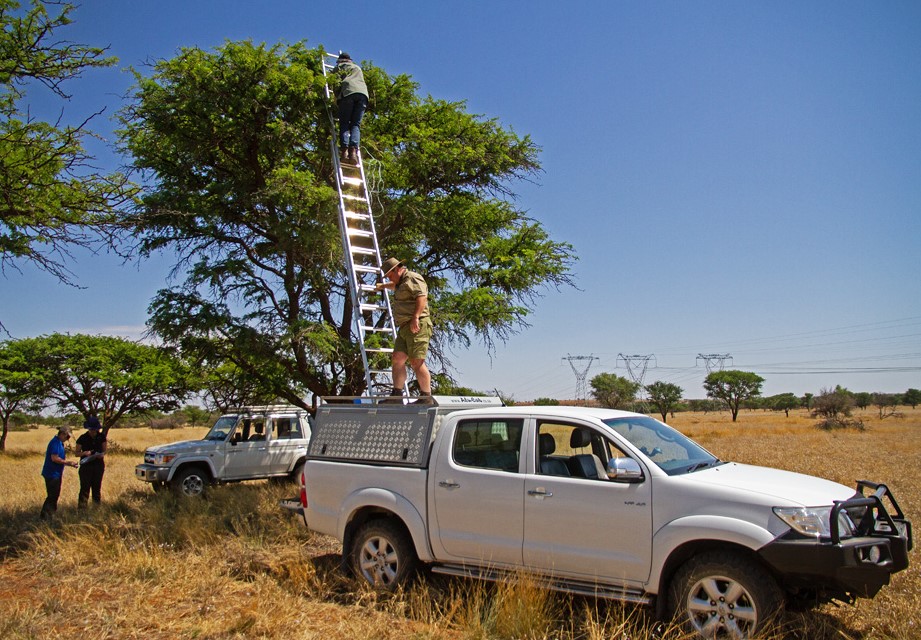 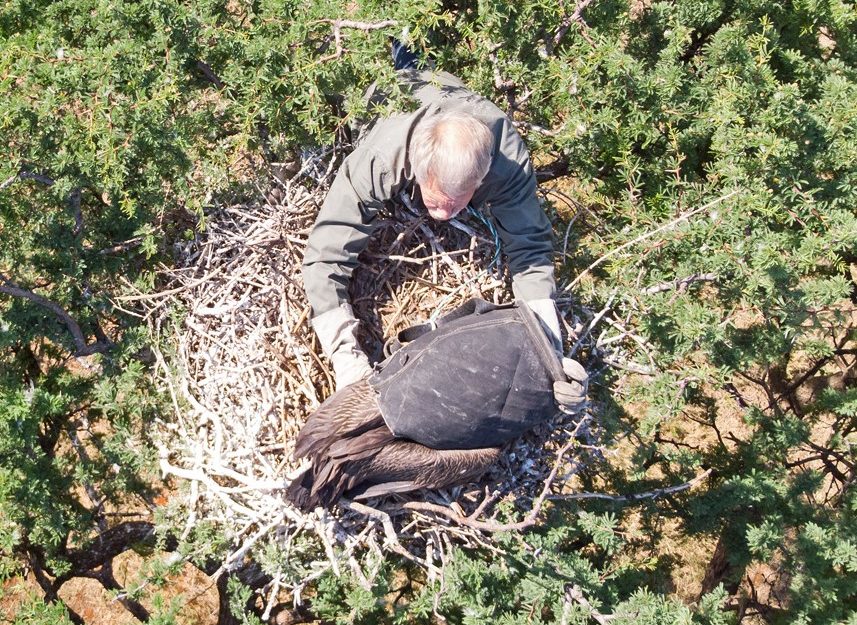 André and Angus prepare equipment to retrieve a chick, and Angus carefully replaces a chick in its nest

When there was doubt about the state of activity of an individual nest, we used a small drone to investigate. This saved a considerable amount of time, especially when a nest was empty or had failed as the team did not have to get equipment ready to climb up to an empty nest so we could move on to the next nest much quicker. On one occasion, we deployed the drone and I was perplexed by what I could see on the tiny mobile phone screen where the images were transmitted from the drone’s camera. It was only once we climbed and peered over the rim of the nest, that we discovered to our surprise that there were two young birds in the nest!

What we found was the first known record of two well-developed chicks in the same African White-backed Vulture nest, not just at Dronfield but, as far as we know, the first time this has been recorded in any tree-nesting Gyps vulture species. We are currently conducting a detailed literature search to confirm this and, once further information is available, will be publishing this record in a peer-reviewed article. These two chicks who, judging by their differing stages of plumage development, differ about 14 days in age, certainly raise a lot of questions in terms of how this happened and how many parent birds are involved. We processed the two chicks and they carefully returned to the nest from where we hope they will fledge over the next 4-6 weeks.

During the week of fieldwork at Dronfield, we were able to process a total of 43 chicks. True to form, when I communicated to Angus after my return to Johannesburg, he confirmed that he has spent at least two days in a small hide near the nest with two chicks in the hope to see more than two parent birds in attendance, but he was not able to confirm this.

It was great to be back at Dronfield, to represent the Hawk Conservancy Trust, and to work with the vultures and researchers there, and to see the dividends of more than 30 years of conservation actions showing in this important breeding population of Critically Endangered birds.” 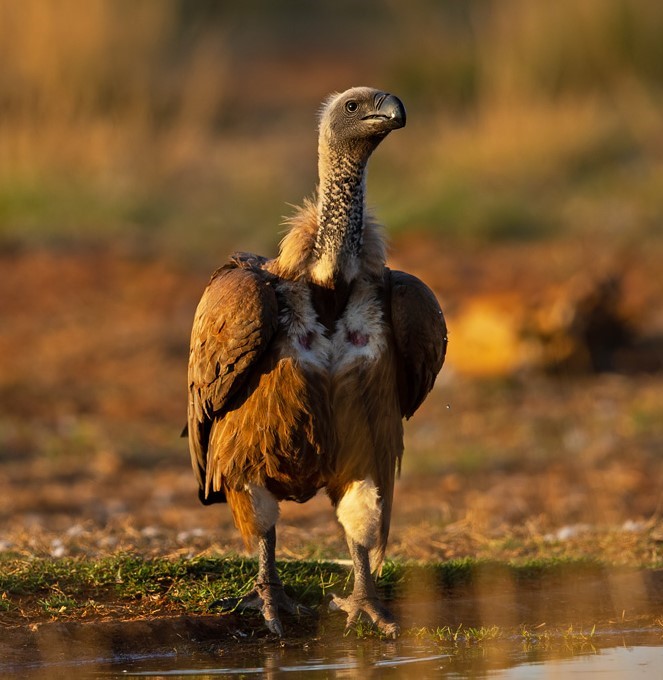 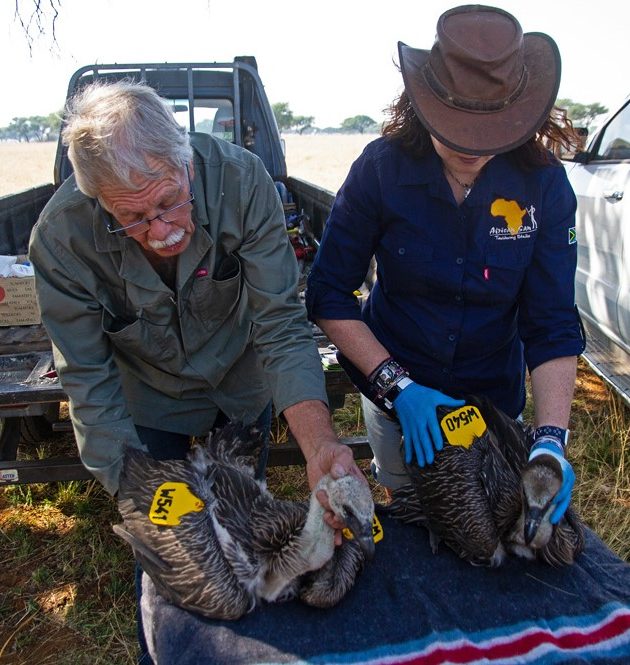 An African White-backed Vulture, and Angus with Beryl Wilson from the McGregor Museum at Kimberley