Over his time working at the Hawk Conservancy Trust, Bird Team member Mike Riley has worked alongside a number of Variable Hawks. If you’ve visited the Trust recently, you may have seen him working with one of our younger hawks, Cooper. But Mike was also lucky enough to work with Cooper’s mum, Mace! We caught up with Mike to hear all about his bond with these wonderful birds:

‘I’d like to talk about a species of bird I’m really fond of here at the Hawk Conservancy Trust.

It’s the Variable Hawk (Geranoaetus polyosoma), which you may also know as the Redback Hawk.  This is the first name I knew this species by, however this name is not used so much anymore. This species first arrived at the Trust in 2005, with four birds that came to us from Customs.  They soon settled in to their new lives with us.

In 2006, which was the year of the naming theme ‘Herbs & Spices’, we began working with one of the females from this group. We named her Mace and she flew at the Trust for a number of years. Due to her background, she was understandably a little unsure around people at first, and working with her required you to be very mindful.

Mace used to fly in our Woodland Arena displays in the afternoons, until on 27 February 2010 Mace decided to fly off and take a short holiday. Luckily she was wearing telemetry, which is a radio tracking device, which the Bird Team used to closely monitor her as she travelled all the way down to the New Forest! To get her back, two members of the Bird Team had to stay at a B&B in the New Forest for four days until she finally decided to come back to one of them. She was eventually brought back to the Trust on 5 March! 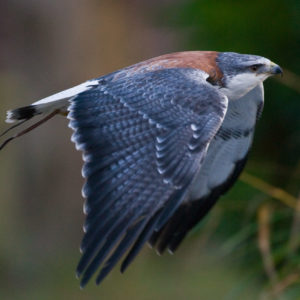 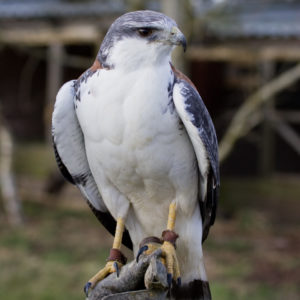 After her escapade, we decided to give Mace a rest period from the displays, and she was moved into an aviary with a male. They settled in well, and then in 2013 things started to change with the pair seen nest building, the pair were heard mating, but sadly nothing came of this.

In early 2018 we had a call from a friend of the Trust, Mark Dalton at the Cotswold Falconry Centre, who let us know he had a male Variable Hawk that could suit as a potential partner for Mace. Mace made the move to her new home in the Cotswolds, where she settled in well. In June 2020, we got the call that the pair had produced a fertile egg together! After an incubation period of 26 – 36 days,  our first Variable Hawk chick hatched after all Mace’s efforts.

As the chick grew, we were able to determine that due to her size, she was a female chick. In November 2020, once she was old enough, Bird Team members Ben Cox and Kathrine Fenger had the pleasure of collecting the chick from The Cotswold Falconry Centre. Mace still happily resides at this centre with her male partner.

Once the juvenile arrived here at the Trust, I was given the absolute pleasure of working alongside her. I also had the pleasure of naming her, and as she hatched in the year where our naming theme was ‘Conservationists’, I named her Cooper after Ernie Cooper. Ernie Cooper was formerly the Director for the conservation organization WWF-Canada (World Wildlife Fund Canada) and the Canadian National Representative of TRAFFIC the global wildlife trade monitoring network. He left WWF and TRAFFIC in 2014, and formed an environmental consulting business, specialising in wildlife trade issues. In 2009, an article in Canadian Geographic referred to Cooper as “Canada’s top wildlife-trafficking investigator.” 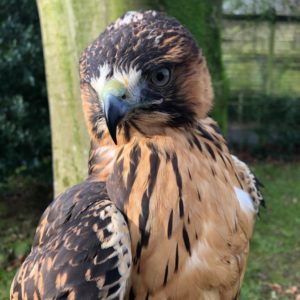 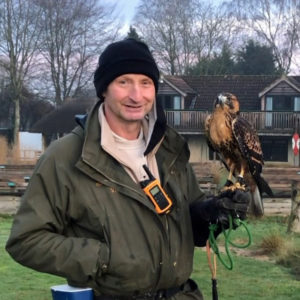 At the moment Cooper is having a rest period to moult through her new feathers.  She has recently been opening our Valley of the Eagles display as one of the pre-show birds, along with our Wahlberg’s Eagle Fawkes.

When flying in the display, Cooper absolutely shines on windy days. In the wild, Variable Hawks are often seen soaring on warm thermals looking for food which consists of mainly small mammals. We are hoping that next season, she will go up to soar to a great height on a more regular basis as she matures and gains experience – we saw this happen a couple of times already this season so know it’s coming!

Even though Cooper is currently having her rest period, I still maintain our bond by going into her aviary to weigh and feed her. Working with Cooper has been a good challenge, and we are already forming a good bond and I’m really looking forward to continuing our time together next season.’